Another good one this week – probably the best one in quite a while, with several well-worked clues and a couple that raised a titter. More like this please, setters!

You can find my completed grid below along with explanations of my solutions where I have them. I hope you find them useful. Before we jump in, please excuse me while I get the old lemonade stand out for a bit. If you dig on horror stories then you might want to swing by my Reviews page, where I’m (slowly) working my way through Stephen Jones’s Best New Horror series. (I’ll have a review of BNH12 shortly after posting this, as it’s been a while.) I’ve even stuck one of my own stories on here somewhere. If you’re here for the answers to a few past Times Jumbo Cryptics, then my Just for Fun page is the place to head.

Right then, to the answers! 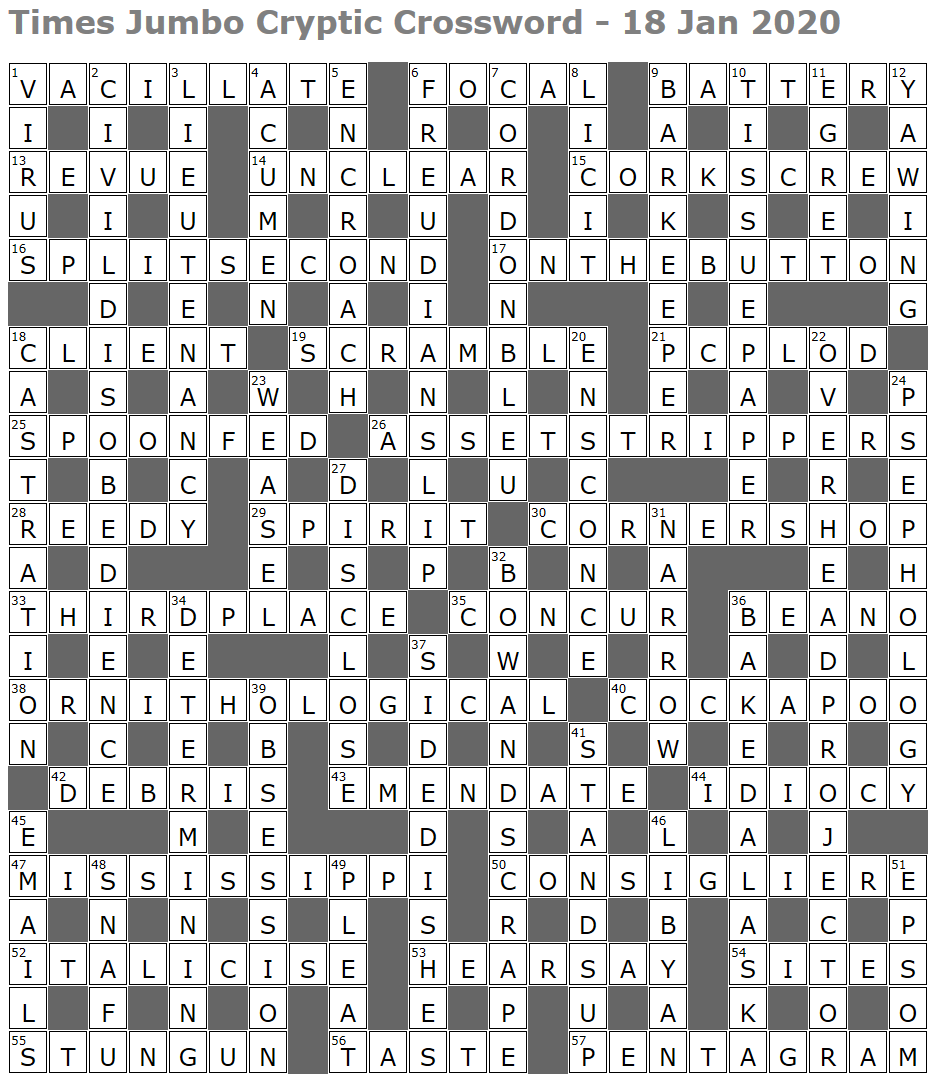 Answer: FOCAL (i.e. “central point”). Solution is FOAL (i.e. “new charger perhaps”, referring to a young horse) wrapped around or “plugging in” C (a recognised abbreviation of “constant”), like so: FO(C)AL.

Answer: BATTERY. Solution satisfies “it’s no use if it’s flat” and “as a pancake”, typically made from batter. One of several clues that made me smile when I clocked the solution.

Answer: REVUE (i.e. “it’s a bit of theatre”). Solution is REV (i.e. “minister”, specifically a recognised abbreviation of “Reverend”) followed by EU (short for the European Union, often informally referred to as “Brussels”) which is reversed (indicated by “after U-turn”), like so: REV-UE.

Answer: UNCLEAR (i.e. “shady”). Solution is UNCLE (i.e. “relative”) followed by the initial letters or “leaders” of “anarchist” and “resistance”, like so: UNCLE-A-R.

Answer: ON THE BUTTON. Solution satisfies “exactly” and “where to press”.

Answer: CLIENT (i.e. “customer”). Solution is CT (a recognised abbreviation of “court”) wrapped around or “maintaining” LIEN (i.e. “right of possession”), like so: C(LIEN)T. Another repeat from last week with rather a similar clue, which is a little more disappointing.

19. Quickly take off Mel’s bra after fiddling with catch at first (8)

Answer: SCRAMBLE (i.e. “quickly take off”). Solution is an anagram (indicated by “after fiddling”) of MEL’S BRA and C (i.e. “catch at first”, i.e. the first letter of “catch”). A clue that scans rather well.

Answer: PC PLOD (i.e. “copper”). Solution is PCP (a drug with the street name “angel dust”) followed by LOAD (i.e. “haul”) once the A had been removed (indicated by “abandoned by a”), like so: PCP-LOD.

25. Took off gripping comedian in the end, receiving undemanding pap? (8)

Answer: SPOONFED (i.e. “receiving undemanding pap”). Solution is SPOOFED (i.e. copied or “took off”) wrapped around or “gripping” N (i.e. “comedian in the end”, i.e. the last letter of “comedian”), like so: SPOO(N)FED.

28. Gourmand leaving starter to get thin (5)

29. I’ll be seized by hallucinatory experiences after knocking back mescal? (6)

Answer: SPIRIT (i.e. “mescal” – other booze is available). Solution is I placed in or being “seized by” TRIPS (i.e. “hallucinatory experiences”) once it has been reversed (indicated by “after knocking back”), like so: SPIR(I)T. Again, good!

Answer: BEANO (i.e. “party”). When read as BE A NO the solution also satisfies “identify with opposition”.

38. On the other hand, I may be captivated by startled hooting call of birds (14)

Answer: ORNITHOLOGICAL (i.e. “of birds”). Solution is OR (i.e. “on the other hand”) followed by I once it has been placed in or “captivated by” an anagram (indicated by “startled”) of HOOTING CALL, like so: OR-N(I)THOLOGICAL.

Answer: COCKAPOO, a cross between an American cocker spaniel and a miniature poodle (i.e. “entrant for Crufts”). Solution is COCK (i.e. “raise” – wahey!) followed by A and POOR (i.e. “miserable”) once the last letter has been removed (indicated by “tailless”), like so: COCK-A-POO. A rather fitting clue.

Answer: DEBRIS (i.e. “ruins”). Solution is DEB (i.e. “girl entering high society”, i.e. a recognised abbreviation of “debutante” – something I remembered from a previous puzzle) followed by SIR (i.e. “gentleman”) once it has been reversed (indicated by “after rejection”), like so: DEB-RIS.

Answer: EMENDATE (i.e. “[to] correct”). Solution is HE-MEN (i.e. “macho types”) with the initial letter removed (indicated by “going topless”) and followed by DATE (i.e. “day”), like so: EMEN-DATE.

44. I would love to interrupt hostile folly (6)

47. State legislator and detective ringing space station repeatedly, before one (11)

Answer: MISSISSIPPI (i.e. “[US] state”). Solution is MP (i.e. “legislator”, specifically a Member of Parliament) and PI (i.e. “detective”, specifically a Private Investigator) wrapped around or “ringing” ISS and ISS (i.e. “space station repeatedly”, ISS being the International Space Station) and I (i.e. “[Roman numeral] one”) like so: M(ISS-ISS-I)P-PI.

Answer: CONSIGLIERE (i.e. “advisor”, especially to a Mafia godfather). Solution is an anagram (indicated by “unorthodox”) of RELIGIONS placed in CE (i.e. “established church”, specifically the Church of England), like so: C(ONSIGLIER)E.

Answer: STUN GUN (i.e. “Taser perhaps” – other brands are available in your local self-defence superstore). Solution is STUNG (i.e. “hurt”) followed by UN (i.e. “one”, as in a young ‘un or a wrong ‘un).

Answer: TASTE (i.e. “sample”). “Of” indicates the solution is hidden in the clue, like so: TITBI(T AS TE)MPTATION.

3. Place property to get commission (11)

4. Perception of area combined with space (6)

Answer: FREUDIAN SLIP. Solution satisfies “could be a revealing error” and, humorously, “shrink underwear”, referring to famous psychiatrist or “shrink” Sigmund FREUD. Well, I thought it was funny.

Answer: CORDON BLEU, a chef or “cook” of the highest excellence (i.e. “on top of ratings”). There’s probably something clever I’ve missed here.
[EDIT: Thanks to zouzoulap in the comments for shedding light on this one. “Cook” turns out to be not only the operative word of the clue but an anagram indicator, specifically of COULD BE ON and R (indicated by “top of ratings”, i.e. the first letter of “ratings”). Cleverly disguised. I like it! – LP]

9. Glance up captivated by stripper, one working in pub? (9)

10. It may be useful for coverage of present time to publish Times, say (6,5)

Answer: TISSUE PAPER (i.e. “it may be useful for coverage of present”). Solution is T (a recognised abbreviation of “time”) followed by ISSUE (i.e. “to publish”) and PAPER (i.e. “Times, say”).

Answer: EGRET (i.e. “water bird”). “Lifted out of” indicates the solution is hidden in the clue. There is no reversal indicator, however, which is a bit off. Anyway, you can see the solution reversed in the clue, like so: DE(TERGE)NT.

18. Players getting restricted food allocation having nuts taken away (10)

Answer: CASTRATION (i.e. “having nuts taken away” – being the massive child I am, this made me chuckle when I got it and it still makes me chuckle as I type this). Solution is CAST (i.e. “players”) followed by RATION (i.e. “restricted food allocation”). Excellent clue!

Answer: ENSCONCE (i.e. “settle”). Solution is N (a recognised abbreviation of “north” – ignore the misleading capitalisation) and SC (ditto “South Carolina”) placed or being “held by” E (ditto “English”) and ONCE (i.e. “formerly”), like so: E-(N-SC)-ONCE.

Answer: OVERHEAD PROJECTOR. Solution satisfies “display tool” and something that’ll project overheads or “forecast costs”. Another that made me smile when I twigged the solution.

Answer: PSEPHOLOGY (i.e. “political science”). Solution is an anagram (indicated by “dashed”) of HOPES along with LOG (i.e. “record”) both placed in or “held by” PY (i.e. “party lacking skill”, i.e. the word PARTY with the ART removed), like so: P(SEPHO-LOG)Y. I had a feeling this would be a word beginning with “ps”, so luckily it didn’t take much finding in my Chambers.

Answer: NARROW (i.e. “strait”). When read as N ARROW, the solution also satisfies “what might indicate direction to Arctic” – N being a recognised abbreviation of “north”. For most of this puzzle, I’d mistakenly had this down as BERING. It didn’t help.

Answer: BOW AND SCRAPE (i.e. “to show deference”). Solution also satisfies “play…fiddle with diminishing level of skill”, referring to how one would play the fiddle badly with a bow. Something like that, anyway.

Answer: BAKED ALASKA (i.e. “[dessert] course”). Solution riffs on how global warming would cause Alaska to heat up. You get the idea.

Answer: SIDE DISHES (i.e. “greens” – ignore the misleading capitalisation). Bloody hell, this took some figuring, especially when you only have the letters _I_E/_I_H_S to work with. The solution is SIDE (i.e. “party”, e.g. one side or “party” of a transaction) followed by DISHES (i.e. “defeats”. I thought this might have been to “dish” someone in a game of eight-ball pool, which is win leaving all your opponent’s balls on the table, but it seems this usage isn’t supported by any dictionary I have. My Oxford did have “to dish” as to soundly to defeat someone, so there you go).

45. Filth put up with always initially in communications (6)

Answer: LIBYAN (i.e. “African”). Solution is LIB (i.e. “party member”, specifically a member of the Liberal Democrats) followed by NAY (i.e. “[a] vote against”) once it has been reversed (indicated by “lifting” – this being a down clue), like so: LIB-YAN.

Answer: SNAFU (i.e. “typical shambles” – referring to a US Military acronym that stands for Situation Normal All Fucked Up). Solution is U (a recognised abbreviation of “united”) followed by FANS (i.e. “supporters”). The whole is then reversed (indicated by “turning up” – again, this being a down clue), like so: SNAF-U. Apologies if you caught some inappropriate language picked up by our dictionaries just then.