It seems we have an easier puzzle to round off the Bank Holiday weekend, though there were a handful of tricky buggers to contend with. Still, not a bad one, and no repeats! As ever, you’ll find my completed grid below along with explanations of my solutions where I have them. I hope you find them helpful.

If you have an old Times Jumbo Cryptic knocking around with a few gaps then my Just For Fun page might help you. If horror fiction is your bag then my Reviews page might interest. To give you a flavour of what that is all about, you’ll shortly see a review of Best New Horror 5 following this post.

And so to the solutions. I’ll be back in a jiffy! 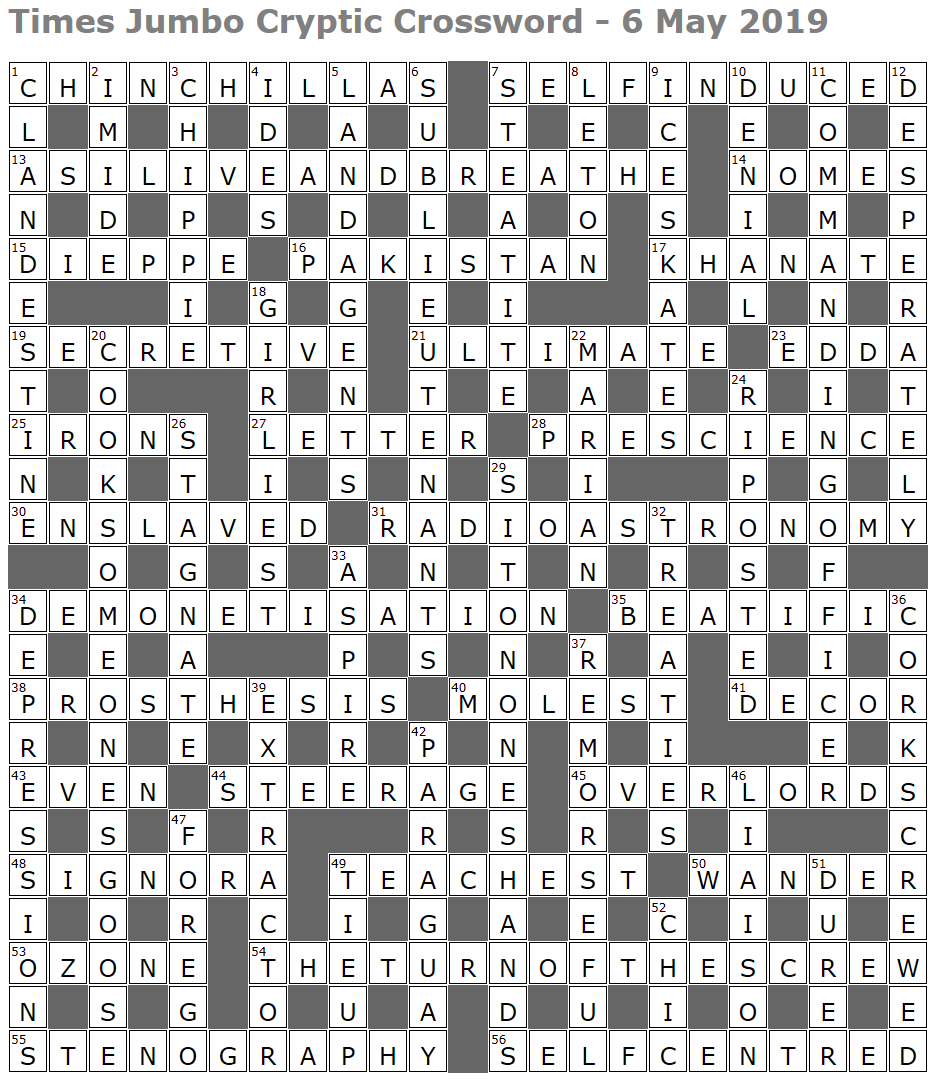 Answer: SELF-INDUCED (i.e. “having no-one else to blame”). “Being terribly” indicates anagram. Solution is an anagram of SINFUL CEDED.

Answer: NOMES, which can mean provinces or departments of Ancient Egypt or modern Greece, i.e. “old parts of Egypt”. “Said to be” indicates homophone. Solution is a homophone of GNOMES (i.e. “small statues”). This was a new one on me, so score one to my Chambers. Took some finding, though!

16. Country hollow in which a storage chest is buried (8)

Answer: PAKISTAN (i.e. “country”). Solution is PAN (i.e. a “hollow” in the ground that can collect rainwater) “in which” A and KIST (i.e. “storage chest” up in Scotland or Northern England, though not one I’m familiar with) “is buried”, like so: P(A-KIST)AN.

Answer: KHANATE (i.e. “Muslim territory”). Solution is HAND (i.e. “worker”) with the final letter removed (indicated by “briefly”) and placed in or “engaged by” KATE (i.e. “woman”), like so: K(HAN)ATE.

Answer: ULTIMATE (i.e. “best”). “Regularly” indicates we take every other letter of QUALITY, which is then followed by I (Roman numeral “one”) and MATE (i.e. “chum”), like so: ULT-I-MATE.

Answer: EDDA, the name of two Scandinavian books, the Prose Edda and Poetic Edda, the former of which collect together a “series of stories”. Solution is E (a recognised abbreviation of “English”) followed by DD (i.e. “theologian”, specifically a recognised abbreviation of Divinitatis Doctor, or a Doctor of Divinity) and, finally, A, like so: E-DD-A. I have the hundreds of hours spent playing Skyrim to thank for this one. I knew it would be worth it someday.

Answer: LETTER. Solution satisfies “character” – as in one of the letters A-Z – and “who may offer terms to residents” – as in one who lets property.

28. Aura surrounding Conservative, one knowing what will happen in future? (10)

Answer: PRESCIENCE (i.e. “knowing what will happen in future”). Solution is PRESENCE (i.e. “aura”) “surrounding” C (a recognised abbreviation of “Conservative”) and I (Roman numeral “one”), like so: PRES(C-I)ENCE.

30. Captive in small room in home counties in terminal situation (8)

Answer: ENSLAVED (i.e. “captive”). Solution is LAV (i.e. “small room”, specifically a recognised abbreviation for a lavatory, sometimes called the smallest room in the house) which is placed “in” SE (i.e. “home counties”, i.e. the South East of England), which is in turn placed “in” END (i.e. “terminal situation”), like so: EN(S(LAV)E)D.

Answer: RADIO ASTRONOMY (i.e. “it involves listening to many a star”). “Dicky” indicates anagram. Solution is an anagram of IS MAD ON ORATORY.

34. Gutted economist in action of castigating the abolition of gold standard? (14)

Answer: DEMONETISATION (i.e. “the abolition of gold standard”). Solution is ET (i.e. “gutted economist”, i.e. the word “economist” with all its middle letters removed), placed “in” DEMONISATION (i.e. “action of castigating”), like so: DEMON(ET)ISATION.

35. Blissful course regularly taken by one female in charge (8)

Answer: BEATIFIC (i.e. “blissful”). Solution is BEAT (i.e. “course regularly taken”, often in relation to police officers) followed “by” I (Roman numeral “one”) and F (a recognised abbreviation of “female”) and IC (ditto “in charge”), like so: BEAT-I-F-IC.

38. Expert’s treatise shows what can help a handicapped person (10)

Answer: MOLEST (i.e. “[to] trouble”). Solution is MOLE (i.e. “secret agent”) followed by ST (i.e. “good person”, specifically a recognised abbreviation of “saint”). This was the last clue I solved, and I only got it once I’d finally convinced myself it really, really, really wasn’t going to be “covert”. Well played, setter.

Answer: EVEN (i.e. “regular”). Solution is EVENT (i.e. “competition”) with the T removed (i.e. “waste of time”, T being a recognised abbreviation of “time”).

44. Where fares are lowest always in part of journey (8)

Answer: STEERAGE (i.e. “where fares are lowest [on a passenger ship]”). Solution is E’ER (i.e. “always”, specifically a poetic contraction of “ever”) placed “in” STAGE (i.e. “part of journey”), like so: ST(EER)AGE.

45. Most superior fellows looking down on a bit of St John’s Wood? (9)

Answer: OVERLORDS. Solution satisfies “most superior fellows” and “looking down on a bit of St John’s Wood”, i.e. OVER LORDS [cricket ground].

53. Gas from individual on the east side of Australia (5)

Answer: THE TURN OF THE SCREW, a  short “novel” by Henry James. Solution also satisfies “performance” – or TURN – “of warder in prison” – or SCREW.

56. Odour about troublemaker socialist oblivious to others? (4-7)

Answer: CLANDESTINE (i.e. “secret”). Solution is CLAN (i.e. “tribe”) followed by DESTINED (i.e. “doomed”) with the last letter trimmed (indicated by “to come to premature end”), like so: CLAN-DESTINE.

Answer: IMIDE (i.e. “chemical”). Solution is I’M (i.e. “this person’s” – ignore the misleading possessive ‘s and read it as “this person is”) followed by IDEA (i.e. “plan”) with the A removed (indicated by “to ban a”), like so: IM-IDE. I knew this would end in IDE, but needed to dip into the dictionary to get the second letter.

4. Day when one meets fate, not insignificant! (4)

Answer: IDES, which is the middle of the month (more or less). Anyway, “day”. Solution is I (Roman numeral “one”) followed by DESTINY (i.e. “fate”) once TINY has been removed (indicated by “not insignificant”), like so: I-DES.

6. Military personnel unessential but in action (14)

Answer: SUBLIEUTENANTS (i.e. “military personnel”). “In action” indicates anagram. Solution is an anagram of UNESSENTIAL BUT.

7. Place in which to find provider of milk and soft mineral (8)

Answer: LET ON (i.e. “reveal”). Solution is LE (i.e. “the French”, i.e. the French for “the” being LE) followed by TON (i.e. “fashion” – I’ve seen this usage before in crossword clues, but I can’t visualise a sentence where “ton” is used to mean fashion).

9. Kit ceases to work – things essential for some sporting competitors (3,6)

10. Renunciation of study, learner of highest standard being upset (6)

Answer: DENIAL (i.e. “renunciation”). Solution is DEN (i.e. “study” as in a room rather than the act of studying) followed by L (a recognised abbreviation of “learner”) and AI (i.e. “of highest standard”, a play on A1 using the Roman numeral I) which are reversed (indicated by “upset” – this being a down clue), like so: DEN-IA-L.

11. COBRA when lacking support gets this military supremo initially (10,7)

Answer: COMMANDING OFFICER (i.e. “military supremo”). Solution is derived by taking BRA away from COBRA (indicated by “when lacking support”), leaving CO. “Initially” indicates this should be expanded to obtain the solution.

12. Some French person half cut off at cathedral site, showing hopelessness (11)

Answer: DESPERATELY (i.e. “showing helplessness”). Solution is DES (i.e. “some French”, the French word “des” translates as “of the”), followed by PER (i.e. “person half cut”, specifically cutting away the second half), then AT and then ELY (i.e. “cathedral site” being the cathedral city of Ely).

Answer: COOK SOMEONE’S GOOSE. Solution satisfies “spoil plans”. Within the context of the clue, this could for example involve cooking someone else’s Christmas goose. You get the idea.

Answer: MARIAN, a devotee of Mary (i.e. “holy woman”). Solution is MARTIAN (i.e. “alien from another planet”) with the middle letter T removed (indicated by “heartless”).

24. Final bit of letter I sent off offered a smart reply (8)

26. Get stuck in street with any number jammed in an entrance (8)

Answer: SIT ON ONES HANDS. Solution satisfies “suppress the employees” and “fail to take action”.

32. Attempts outside to dispose of written agreements (8)

Answer: TREATIES (i.e. “written agreements”). Solution is TRIES (i.e. “attempts”) placed “outside” of EAT (i.e. “to dispose of”, albeit a little weakly), like so: TR(EAT)IES.

33. Aim revealed by creature with venom and anger (6)

Answer: DEPRESSIONS (i.e. “mental problems”). “Suffering” indicates anagram. Solution is an anagram of SO IS SPENDER.

Answer: CORKSCREWED (i.e. “bottle stoppers may have been this”). “We hear” indicates homophone. Solution is a homophone of “Cork” (i.e. a “port” in Ireland) made possessive with ‘s, and “crude” (i.e. “rough and ready”).

Answer: REMORSEFUL. Solution is an anagram (indicated by “distraught”) of FEEL SO RUM which is placed “after” R (i.e. “end of affair”, i.e. the last letter of “affair”). Within the context of the clue, one may feel remorseful after the end of an affair.

Answer: EXTRACTOR (i.e. “remover”). Solution is EXTRA (i.e. “spear carrier” – a nickname for a minor acting part) with the last letter removed (indicated by “short”) and followed by ACTOR (i.e. “performer on stage”), like so: EXTR-ACTOR. A very well worked clue.

42. A few lines in newspaper on fellow enthralling a country (8)

Answer: PARAGUAY (i.e. “country”). Solution is PARA (i.e. “a few lines in newspaper”, specifically a recognised informal abbreviation of “paragraph”) followed by GUY (i.e. “fellow”) which includes or “enthrals” A, like so: PARA-GU(A)Y.

49. Hint about group of countries in affiliation (3-2)

51. Some are rude about Renaissance painter (5)

Answer: Albrecht DURER (i.e. “Renaissance painter”), and very good he was too – even if his rhino was a little trippy. Anyway, “some” indicates the solution is hidden in the clue, while “about” suggests the solution is reversed, like so: A(RE RUD)E.