This week’s puzzle saw another slight increase in difficulty, but could equally have just been me taking longer than normal to twig the wordplay behind a number of clues. Either way, this puzzle was one of the better ones. You’ll find my completed grid below along with explanations of my solutions where I have them. I hope you find them useful.

As usual, before we crack on, a little housekeeping. If you have a relatively recent Times Jumbo Cryptic puzzle knocking around for which you’re missing a few solutions, then you might find my Just For Fun page useful. If you’ve a soft spot for horror short stories then you might find of interest my current folly of reviewing Stephen Jones’s Best New Horror series, which you can find on my Reviews page.

Right-oh. On with the show. I’ll see you in a couple of days, all being well, once I’ve gotten my hands on Easter Monday’s puzzle. 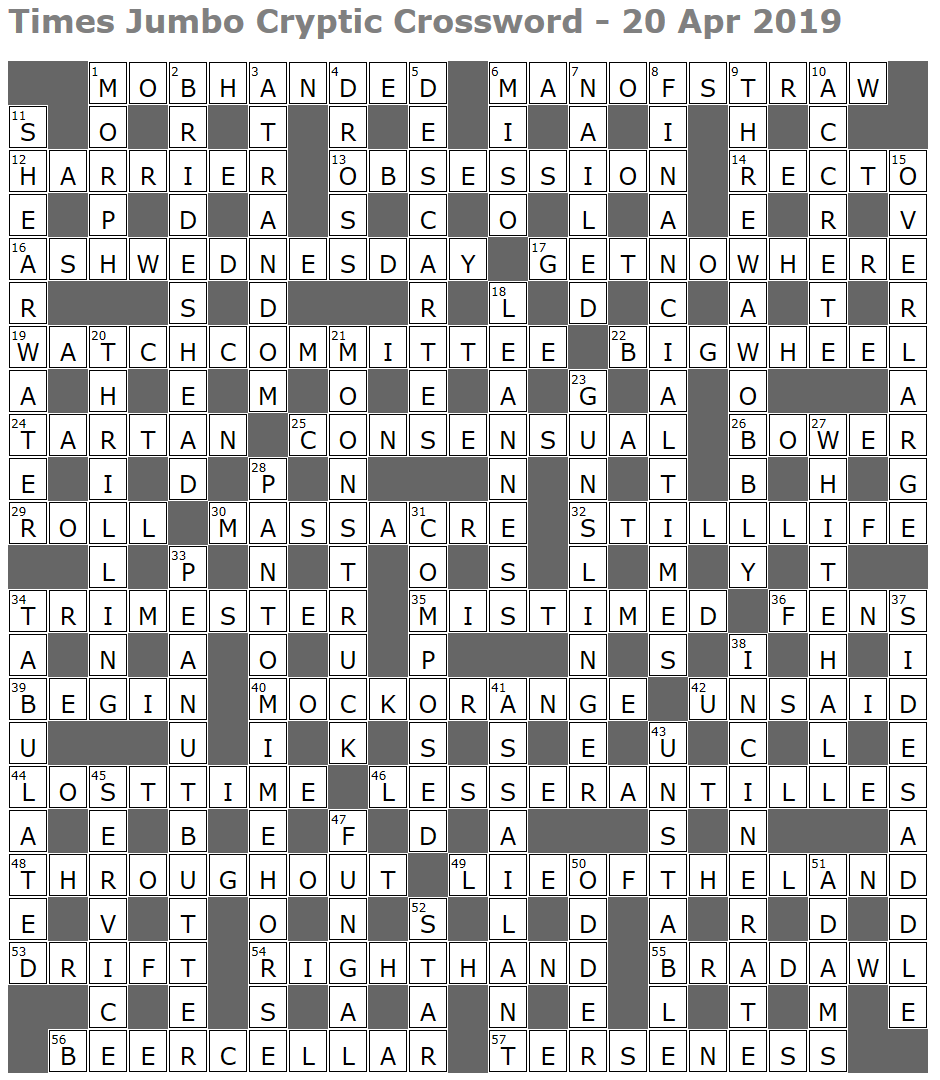 1. Doctor put into a group round hospital with many others (3-6)

Answer: MOB-HANDED (i.e. “with many others”). Solution is MO (i.e. “doctor”, specifically a Medical Officer) followed by BANDED (i.e. “put into a group”) placed “round” H (a recognised abbreviation of “hospital”), like so: MO-B(H)ANDED.

Answer: MAN OF STRAW. Solution satisfies “one who’s not genuine” (perhaps more commonly referred to as a “straw man”), and “scarecrow”.

Answer: OBSESSION (i.e. “a thing”, e.g. having a thing for someone). Within the context of the clue, a “meeting of alumni” would be an OB SESSION, with OB being a recognised abbreviation of “old boy”.

Answer: RECTO, which is a printing term meaning the right-hand page of an open book. “Coming out of” indicates the solution is hidden in the clue, like so: DI(RECTO)RY. This solution appeared recently in puzzle 1366.

19. Old police supervisors choosing what to close round wrists? (5,9)

Answer: TARTAN. Solution is RAT (i.e. “defector”) followed by NAT (i.e. “from Scottish party”, as in a recognised abbreviation of “Nationalist”), all reversed (indicated by “returning”), like so: TAR-TAN. Within the context of the clue, said Scottish defector’s dress could well be tartan.

Answer: ROLL. Solution satisfies “go over and over” and “something on the drums”, as in a drum roll.

30. Heavily defeat male, since all but untouchable (8)

Answer: MASSACRE (i.e. “heavily defeat”). Solution is M (a recognised abbreviation of “male”) followed by AS (i.e. “since”) and SACRED (i.e. “untouchable”) with the final letter removed (indicated by “all but”), like so: M-AS-SACRE.

Answer: TRIMESTER (i.e. three months, or an academic “term”). Solution is TR (i.e. “term oddly”, i.e. the odd letters of TERM) followed by an anagram (indicated by “out”) of TIRES ME, like so: TR-IMESTER.

36. Manages to drop daughter in marshland (4)

42. Presumably happy about one omitted from speech (6)

Answer: LOST TIME. Solution satisfies both “fell behind” and “searching for this, Marcel”, as in Marcel Proust’s 4000+ page novel In Search Of Lost Time. Can’t say I’ve read it, but I have read Stephen King’s The Dark Tower, which also weighs in over 4000 pages. Does that count?

48. Summarily dismissed in speech all the time (10)

Answer: THROUGHOUT (i.e. “all the time”). Solution also satisfies “summarily dismissed in speech”, i.e. a homophone of “threw out”.

Answer: LIE OF THE LAND. Solution satisfies “current situation” and, cryptically, “the national myth” – a myth being another word for a lie.

Answer: DRIFT. Solution satisfies “meaning” and “to float along”.

54. Principally relied on such a drive in a British vehicle (5-4)

Answer: RIGHT HAND. Solution satisfies “principally relied on”, as in a right-hand man, and “a [right-hand] drive in a British vehicle”.

55. One may be boring these days, joining in rough fight (7)

Answer: BRADAWL, which is a small tool used for making holes in woodwork to assist the application of nails or screws (i.e. “one may be boring”). Solution is AD (i.e. “these days”, as in Anno Domini) “joined in” BRAWL (i.e. “rough fight”), like so: BR(AD)AWL.

Answer: BEER CELLAR. Solution satisfies “barmaid said”, i.e. a homophone of “beer seller”. In the context of the clue, a beer cellar would well be where the porter – a kind of beer – is kept. Not a great one, this. I’m guessing “college” is a red herring to throw solvers off the desired meaning of “porter”, but I could be wrong.

Answer: TERSENESS (i.e. “brevity”). “Regularly” suggests the solution can be found at regular intervals in the clue, in this case the final three letters of the first three words of the clue: SETTER CHOSEN ASSESS.

Answer: MORPH (i.e. “slowly transform”). Solution is PROM (i.e. “school party”) reversed (indicated by “going over”) and followed by H (“hotel” in the phonetic alphabet), like so: MORP-H.

Answer: BRIDESHEAD. Solution satisfies “literary castle”, specifically from Evelyn Waugh’s Brideshead Revisited, and something that is “often veiled”, as in a BRIDES HEAD.

3. A monarch abandoning modern art, rejected as without purpose (2,6)

Answer: AT RANDOM (i.e. “without purpose”). Solution is an anagram (indicated by “rejected”) of MODERN ART once ER (i.e. “a monarch”, specifically Elizabeth Regina) has been removed (i.e. “abandoned”).

Answer: DROSS (i.e “refuse”, as in rubbish). Solution is D (a recognised abbreviation of “duke”) followed by John Hume ROSS, a false name used by Thomas Edward “Lawrence”, popularly known as Lawrence of Arabia. That’s my take on it, anyway.

5. Philosopher taking sort of lead, with children round about (9)

Answer: René DESCARTES (i.e. “philosopher”). Solution is SCART (i.e. “sort of lead” – ask your parents, kids) with SEED (i.e. “children”) reversed and placed around it (indicated by “round” and “about”), like so: DE(SCART)ES.

Answer: MISO (i.e. a Japanese “paste” made from soya beans). Solution is IS “inserted” into MO (i.e. “doctor”, specifically a Medical Officer), like so: M(IS)O.

7. Properly fixed, having got worse after November (6)

Answer: NAILED (i.e. “properly fixed”). Solution is AILED (i.e. “having got worse”) placed “after” N (“November” in the phonetic alphabet), like so: N-AILED.

Answer: THREW A WOBBLY. Solution satisfies “delivered curve ball, perhaps” and “get very upset”. The past tense of the former suggests is should be THREW rather than THROW.

Answer: ACCRETE (i.e. “grow together”). Solution is A and CRETE (i.e. “Med island”) placed around C (a recognised abbreviation of “clubs” used in card games), like so: A-(C)-CRETE.

Answer: SHEARWATER (i.e. “bird” – did a Google Image search: cool wings, bit random otherwise). Solution is SR (a recognised abbreviation of “senior”) “eating” an anagram (indicated by “chewed”) of WHEATEAR, like so: S(HEARWATE)R. Another well-worked clue.

15. Excessive lavender and rosemary at first in round border (9)

Answer: THRILLING (i.e. “sensational”). Solution is THING (i.e. “preoccupation”, as in having a thing for someone) placed “about” RILL, which is a very small brook (i.e. “running water”).

Answer: MOONSTRUCK (i.e. “crazed”). Solution is Keith MOON (i.e. the “drummer” in The Who) with a possessive ‘S and followed by TRUCK (i.e. “means of transport”).

Answer: GUNSLINGER. “Shot” indicates anagram. Solution is an anagram of NURSING LEG. Within the context of the clue, someone could well have been shot by a gunslinger.

27. What everyone supports the tiniest bit: government (9)

Answer: WHITEHALL (i.e. “government”). Solution is EH (i.e. “what”, as in “eh?”) and ALL (i.e. “everyone”) being placed under or “supporting” WHIT (i.e. “the tiniest bit”) – this being a down clue – like so: WHIT-EH-ALL. One of those clues where the wordplay took a lot longer to figure out than the solution itself. I rather like it, weirdly.

Answer: PANTOMINE HORSE (i.e. “double act”). “Having to change” indicates anagram. Solution is an anagram of NO ATMOSPHERE IM.

31. Made manure as temperature dropped in calm (8)

Answer: COMPOSED (i.e. “calm”). Solution is COMPOSTED (i.e. “made manure”) with the T (a recognised abbreviation of “temperature”) removed or “dropped”.

Answer: TABULATED (i.e. “ordered”). Solution is TABU, an alternative spelling of taboo (i.e. “not to be touched”) followed by LATE (i.e. “behind”) and D (a recognised abbreviation of “daughter”).

Answer: ASSAILANT (i.e. “aggressor”). “Vicious” indicates anagram. Solution is an anagram of STALIN AS A.

Answer: UNSTABLE. Solution satisfies “not mentally sound” and, cryptically, to “take horse out”.

Answer: ODDER (i.e. “stranger”). Solution is RED (i.e. “Communist”) and DO (i.e. “party” – ignore the misleading capitalisation) and the whole lot reversed (indicated by “backing”) like so: OD-DER.

Answer: John ADAMS, second “president” of the United States of America. Solution is AD (i.e. “commonly received”, i.e. the word “had” as said by one who drops their aitches) then A and MS (i.e. “text”, specifically a recognised abbreviation of “manuscript”), like so: AD-A-MS. Another where the wordplay took significantly longer to figure out than the solution.

Answer: STAR (i.e. “Hollywood figure, perhaps” – could refer to “star” as in a celebrity, or the stars that adorn the pavement of Hollywood Boulevard). Solution is the first half of STARKERS (i.e. “half-naked”).