Another Saturday, another Times Jumbo Cryptic Crossword! I liked this one, with only one clue jiggering me. You’ll find my completed grid below, along with explanations of my solutions where I have them.

Before we get to that, a question. The Times Jumbo Cryptic Crossword offers a prize each week to a winner drawn from all the correct entries they receive, usually a couple of weeks after publication. I don’t enter my solutions, but others obviously do. A few people have passed comment on previous solutions of mine, with opinion reasonably split between those who would rather I didn’t post these solutions so soon after publication (as it gives subscribers to my blog and anyone hitting my site the opportunity to cheat and a chance to win), and those who are pretty relaxed about it. My view is that the challenge of solving the puzzle trumps the chance of seeing my name in print, and I often see comments online from people wishing The Times and other newspapers would print explanations of their solutions. What do you think? Should I hang fire publishing these solutions until after the competition closes, or would you rather find the answer to those last couple of awkward clues and get on with your week?

Feel free to leave a comment. The comments on my blog are moderated to prevent spamming, but I’ll approve all genuine comments, good or bad, as soon as I can.

P.S. I know I’ve said this the last couple of weeks, but my review of Best New Horror 2 will be published soon, honest guv! I know you can’t wait. Anyway, onwards again! 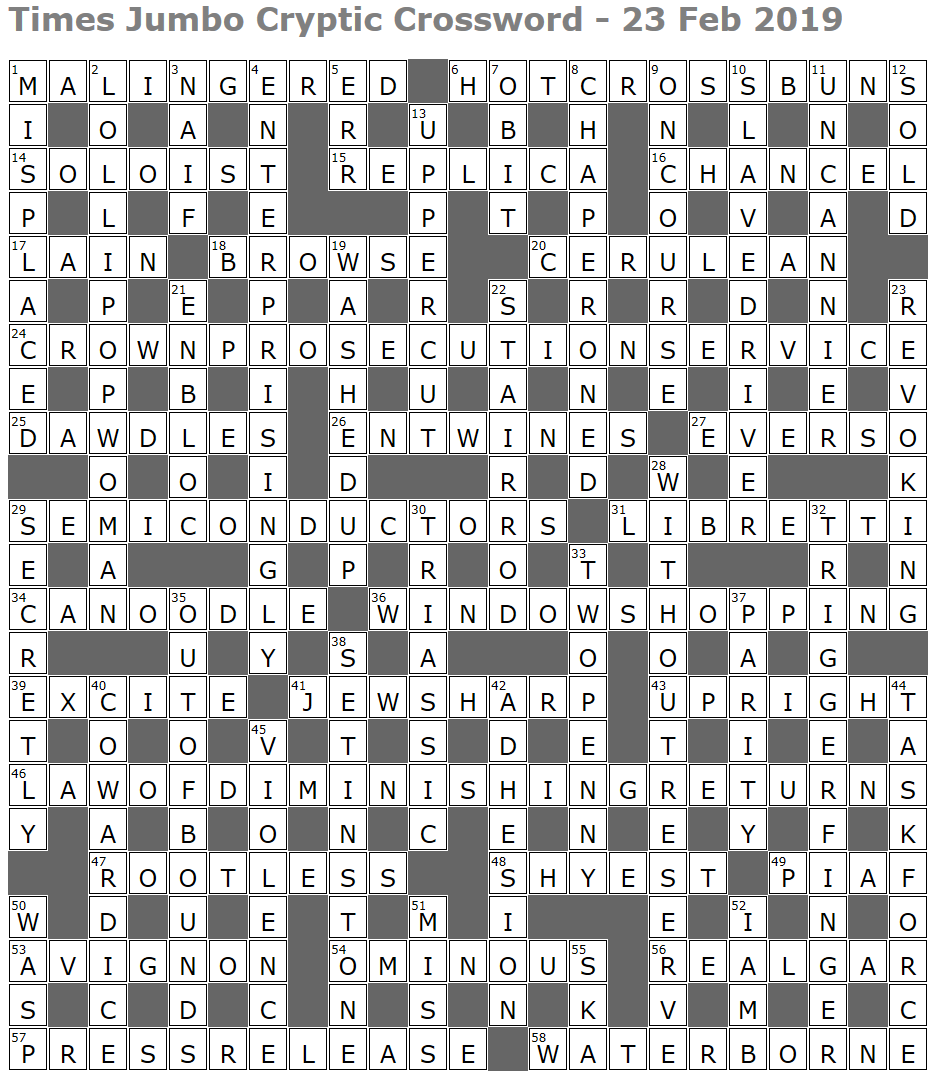 1. Swapping a couple of letters, person traducing editor skived off (10)

Answer: MALINGERED (i.e. “skived off” – one of those words you feel ought to describe something else). Solution is MALIGNER (i.e. “one traducing”) with the G and N swapped around, and then followed by ED (a recognised abbreviation of “editor”), like so: MALINGER-ED.

16. Risk heading for location where sanctuary may be found (7)

Answer: CHANCEL, which is the eastern part of a church (i.e. “where sanctuary may be found”). Lord help anyone seeking sanctuary from the north, south or west sides, it seems. Solution is CHANCE (i.e. “risk”) followed by L (i.e. “heading for location”, i.e. the first letter of the word “location”).

Answer: BROWSE. Solution satisfies both “flip through” and “report of summits” i.e. a homophone of “brows”.

Answer: CERULEAN (i.e. “blue” – I admit it. I got this from the intro to “Pusher”, one of my favourite X-Files episodes.) Solution is URE (i.e. a “river” in North Yorkshire) reversed (indicated by “westbound”) and placed in CLEAN (i.e. “pure”), like so: C(ERU)LEAN.

Answer: ENTWINES (i.e. “laces”). Solution is an anagram (indicated by “mixed”) of TEN followed by WINES (i.e. “drinks”), like so: ENT-WINES.

Answer: WINDOW-SHOPPING (i.e. “doing survey in street”). To be honest the setter has me here, so watch out. I can see WISHING in beginning, middle and end of the solution, and I guess PP represents “parking bays”, but I can’t make the leap.

Answer: EXCITE (i.e. to “fire”). Solution is C (a recognised abbreviation of “caught” used in cricket and other ball games) placed “in” EXIT (i.e. “gateway”) and then followed by E (i.e. “ensign’s opening”, i.e. the first letter of the word “ensign”), like so: EX(C)IT-E.

Answer: UPRIGHT. Solution satisfies both “just” and “not grand” (as in grand pianos vs upright pianos).

Answer: LAW OF DIMINISHING RETURNS (i.e. “economic tenet”). Solution is RETURNS (i.e. “is recalled”) placed “after” an anagram (indicated by “kneading”) of LOAF wrapped around (i.e. being “stopped” by) W (a recognised abbreviation of “wife”) and DIMINISHING (i.e. “sinking”), like so: LA(W)OF-DIMINISHING-RETURNS.

Answer: ROOTLESS (i.e. “vagrant” – I must have had four different answers for this until I finally solved 35d). Solution is S (i.e. “originally staying”, i.e. the first letter of the word “staying”) “staying in” ROOTLES (which is to grub or turn up like a pig, i.e. “digs”), like so: ROOTLE(S)S.

48. Part of marshy estuary shrinking the most? (6)

Answer: SHYEST (i.e. “shrinking the most”). “Part of” indicates the solution is hidden in the clue, like so: MAR(SHY EST)UARY.

Answer: Edith PAIF (i.e. “a fine singer” – go on, admit it, at some point in your life you’ve had a go singing Non Je Ne Regrette Rien while pinching and wiggling your throat. If you haven’t then you were drunk and can’t remember it.) Solution is PI (i.e. “Greek character”) followed by A and F (a recognised abbreviation of “fine”).

Answer: REALGAR (i.e. “mineral” – a new one on me, not being a keen geologist). Solution is REAL (i.e. “concrete”) followed by RAG (i.e. “roof tile” – one of the variant forms of the word “rag” is “a large rough slate”) reversed (indicated by “going west”, this being an across clue), like so: REAL-GAR.

58. Carried in liquid that could make tea browner (10)

1. Mike has qualified for a medal, perhaps unwisely given (9)

Answer: MISPLACED (i.e. “perhaps unwisely given”). Solution is M (i.e. “Mike” in the phonetic alphabet) followed by IS PLACED (i.e. “has qualified for a medal”).

3. Green area seized by N European briefly given up (4)

Answer: NAIF, an alternative spelling of naïve (i.e. “green”). Not one I was familiar with. Solution is A (a recognised abbreviation of “area”) placed in FIN (i.e. “N European briefly”, i.e. the word “Finn” with the final letter removed) reversed (indicated by “given up”, this being a down clue), like so: N(A)IF.

Answer: ERR (i.e. to “stray”). “Regularly unemployed” indicates that the solution is derived by removing every other letter of the word BEARER.

Answer: UNCANNIER (i.e. “stranger”). I had this solved way before figuring out the wordplay. Solution is DUNCAN (i.e. the “unfortunate king” in Shakespeare’s Macbeth) with the initial letter removed (i.e. “beheaded”) and followed by REIN (i.e. “control”) reversed (indicated by “taken up”, this being a down clue), like so: UNCAN-NIER.

12. Spades of considerable age traded in (4)

Answer: WASHED-UP. Solution satisfies both “finished” and “as restaurant’s dishes should be”.

21. First couple of blokes inside set up bollard together (2,4)

Answer: STAIR-ROD, which is a rod that holds a stair carpet in place (i.e. “that grips runner” – I guess a carpet would run if it wasn’t an inanimate object. Hmm…) Solution is S (a recognised abbreviation of “son”) followed by TROD (i.e. “walked”) “admitting” AIR (i.e. a musical “strain”), like so: S-T(AIR)ROD.

Answer: WITHOUT RESERVE. Solution (kind of) satisfies “not using book” and “to the fullest extent”.

30. Disturbed at crisis of great antiquity (8)

Answer: TRIASSIC (i.e. “of great antiquity”). “Disturbed” indicates anagram. Solution is an anagram of AT CRISIS.

Answer: TWOPENNY (i.e. “worthless”, with apologies on behalf of the setter to all Pennys out there). “Astray” indicates anagram. Solution is an anagram of PONY WENT.

Answer: OUT OF BOUNDS. Solution satisfies “uniform that’s donned without ties” i.e. it does not have bounds, and “taboo”.

37. I must stop litigant getting equal treatment (6)

Answer: SET IN STONE. Solution satisfies “inflexible” and “as Excalibur”.

Answer: ADHESION (i.e. “grip”). Solution is an anagram (indicated by “loosened”) of HAD followed by NOISE (i.e. “racket”) reversed (indicated by “lifting”, this being a down clue), like so: ADH-ESION.

Answer: TASK FORCE (i.e. “squad”). Solution is FOR and CE (a recognised abbreviation for a “civil engineer”) “undertaking” (i.e. placed under, this being a down clue) TASK (i.e. “job”), like so: TASK-FOR-CE.

Answer: VIOLENCE (i.e. “passion”). Solution is an anagram (indicated by “troubled”) of IN LOVE followed by CE (i.e. “church”, specifically the Church of England), like so: VIOLEN-CE.

Answer: WASP. Solution satisfies “flyer” and “a type dominant over the pond”, specifically a White Anglo-Saxon Protestant, a sometimes-derogatory term used to describe the upper crust of American society.

Answer: MISS. Solution satisfies both “long to see” and “girl”.

Answer: IAMB, a prosodic term meaning “a foot (a division of a line of poetry) of two syllables, a short followed by a long, or an unstressed by a stressed”, i.e. “line of verse”. You’re welcome. I can think of less wanky words fitting the letters _A_B, but there you go. Solution is I AM (i.e. “the writer’s” – think of it in terms of “the writer is” from the point of view of the setter) followed by B (a recognised abbreviation of “book”).