A medium strength puzzle this week, and a decent one save for a couple of clues that got up my nose. To be fair these didn’t overshadow matters too much, and the puzzle did offer the kind of steady progression I always like. Plus, it’s always good to learn new things.

You can find my completed grid below along with explanations of my solutions where I have them. I hope you find them helpful. If a recent Jumbo has buggered off to Glastonbury with your tickets then you might find solace in my Just For Fun page, where you’ll find links to solutions for hundreds of the things. Elsewhere there are the usual ancient book reviews and a story of mine.

Thanks again for the kind words and help. It’s always interesting to hear how other solvers fared once their pens are stilled. Till next time, stay safe out there kids. 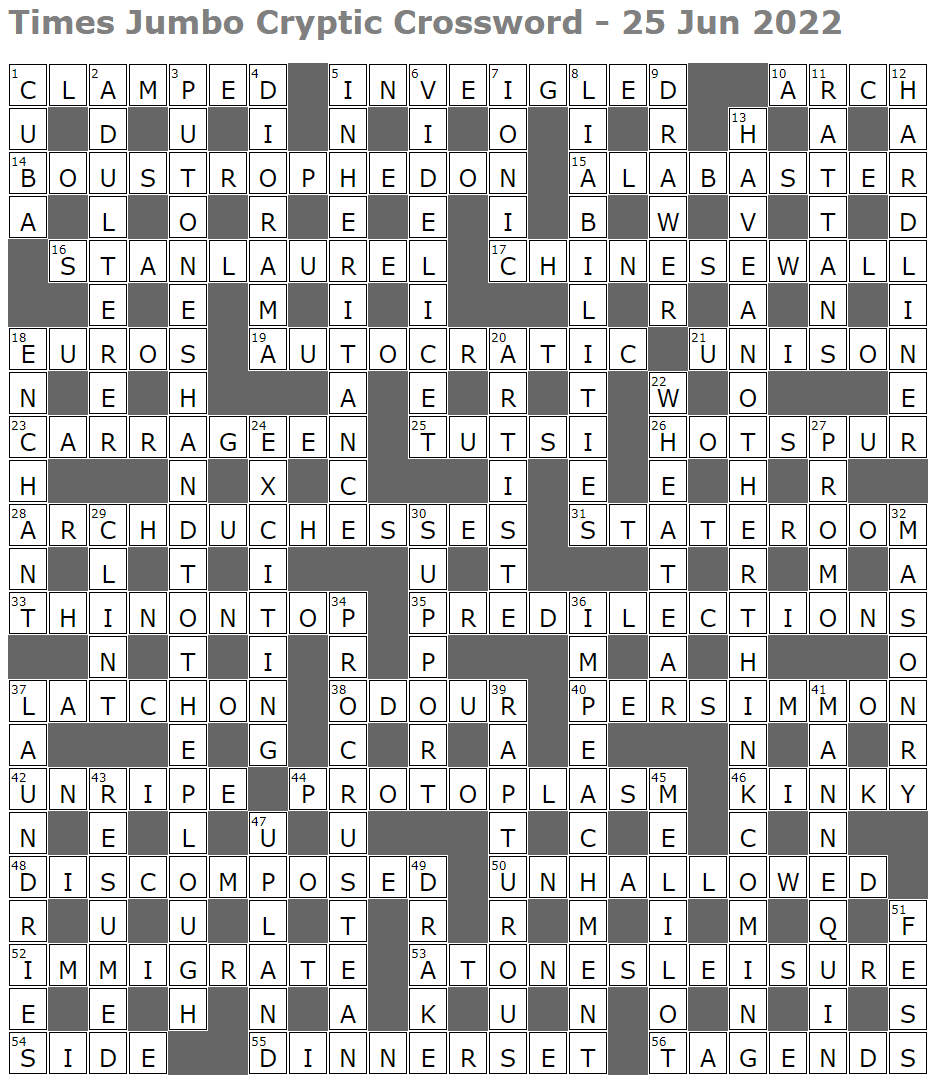 Answer: ARCH (i.e. “impish”). Solution is MARCH (i.e. “demonstration”) with the M removed (indicated by “maiden removed from…” – M being a recognised abbreviation of “maiden” used in cricket).

Answer: BOUSTROPHEDON (i.e. “going to and fro repeatedly” – over to Chambers: “(of ancient writing) alternately from right to left and from left to right”). “Around” indicates anagram. Solution is an anagram of BOUNDERS TO HOP. Wordplay was reasonably obvious, but it took a brute force of my Chambers once I’d had enough intersecting letters.

Answer: STAN LAUREL (i.e. “funny fellow”, one half of Laurel and Hardy). Solution is AN and an anagram (indicated by “unusual”) of ALLURE both placed after or “at end of” ST (a recognised abbreviation of “street”), like so: ST-(AN-LAUREL).

Answer: CHINESE WALL (i.e. “communications barrier” – and so to Chambers again: “the strict demarcation barrier which must exist between eg the corporate finance and investment advisory departments of a bank, etc in order to ensure that privileged information available to one department is not available to the other and so prevent conflicts of interest arising”). Solution is CHINES (i.e. “ravines” – a new one on me, apparently derived from the Old English word for a cleft) followed by WE reversed (indicated by “turned back”), then ALL (i.e. “everything”), like so: CHINES-EW-ALL.

Answer: EUROS. Solution satisfies “beastly types” – Chambers considers them a type of large kangaroo, another new one on me – and “money across the Channel”, being the currency of several European countries.

Answer: CARRAGEEN (i.e. a type of “seaweed”). Solution is CAREEN (i.e. “lean over”) wrapped around of “grabbing” RAG (i.e. to “guy” or make fun), like so: CAR(RAG)EEN. I got the CAREEN bit but again had to brute force my Chambers to nail the rest.

Answer: TUTSI (i.e. “African people”). Solution is IS and “Archbishop” Desmond TUTU once the last letter has been removed (indicated by “endlessly”). The whole is then reversed (indicated by “backing”), like so: TUT-SI.

Answer: THIN ON TOP (i.e. “description of balding man”). Solution is THING (i.e. “article”) with its last letter removed (indicated by “short”) and the remainder followed by ON TOP (i.e. “winning”).

Answer: LATCH ON (i.e. “understand”). Solution is LA (i.e. “the French”, i.e. the feminine form of “the” in French) followed by TON (i.e. “fashion”, a variant meaning of TON you hardly ever see outside of cryptic crosswords) once wrapped around or placed “outside” of C (i.e. “entrance to classy”, i.e. the first letter of “classy”) and H (“hotel” in the phonetic alphabet), like so: LA-T(C-H)ON.

Answer: ODOUR (i.e. an air or “atmosphere”. My Chambers dictionary and thesaurus don’t want to know; my Bradford’s is fairly cold on the matter; the closest I can get is “a lingering quality or impression attaching to something” (Oxford), which I guess just about gets it over the line). Solution is O (a recognised abbreviation of “old”) and UR (i.e. “biblical city”, a favourite of cryptic crossword setters) wrapped around or “in which there is” DO (i.e. “party”), like so: O-(DO)-UR.

Answer: PERSIMMON (i.e. a plum-like “fruit”). Solution is an anagram (indicated by “dubious”) of PROMISE and MN (i.e. “hollow melon”, i.e. the word “melon” with all its middle letters removed).

Answer: UNRIPE (i.e. “not fit for eating”). “Suspect” indicates anagram. Solution is an anagram of PRUNE I.

Answer: PROTOPLASM (i.e. “I’m living [material] in a cell”). Solution is TOP LASS (i.e. “leading girl”) with the last letter removed (indicated by “falling short”) and the remainder placed “in” PROM (i.e. “concert”), like so: PRO(TOP-LAS)M.

Answer: UNHALLOWED (i.e. “totally secular”). Solution is UN (i.e. “a foreign”, specifically the masculine form of “a” in French) followed by H (a recognised abbreviation of “hospital” used on maps), then ALLOWED (i.e. “permitted”).

Answer: IMMIGRATE (i.e. “to enter new country”). Solution is I’M and M’I (i.e. “I am going one way and another”, i.e. a contraction of “I am” followed by its reverse) followed by GRATE (i.e. “crush” – another that leaves my assorted dictionaries lukewarm at best. I guess we’re referring to the pressure one would apply on something in order to grate it, but I feel this setter’s going to need Perry Mason’s card if they keep this up).

Answer: SIDE (i.e. arrogance, pretension or “posturing”, albeit fairly deep into the definitions). “Evident in” indicates the solution has been hidden in the clue, like so: RIDICULOU(S IDE)AS.

Answer: DINNER SET (i.e. “that may be got together for meal”). Solution is D (a recognised abbreviation of “daughter”) followed by INNER SET (i.e. “most intimate group”).

Answer: ADULTERER. The solution solves the clue as a whole, but also comprises ADULT (i.e. “grown-up”) and ERR (i.e. “to transgress”) once wrapped around or “involving” E (i.e. “end [letter] of marriage”), like so: ADULT-ER(E)R.

Answer: PUT ONE’S HAND TO THE PLOUGH (i.e. “undertake a task”). The remainder of the clue plays on a ploughman’s lunch, often including “cheese and pickle”.

Answer: DIORAMA (i.e. “series of pictures”, in this case “an exhibition of translucent pictures seen through an opening with lighting effects” (Chambers). Can also be a three-dimensional scene in miniature). Solution is IO (i.e. “satellite”, specifically a moon of Jupiter) placed “in” DRAMA (i.e. “turbulent episode”), like so: D(IO)RAMA.

Answer: INHERITANCE. Solution satisfies the clue as a whole, playing on how such a “benefit” is executed through the “will” of the deceased. “Succeed” can also mean to inherit. You get the idea.

Answer: LIABILITIES (i.e. “these can be paid off”, i.e. debts). Solution is L (a recognised abbreviation of “pounds” of weight, after the Latin libra) followed by I (i.e. “[Roman numeral] one”) and ABILITIES (i.e. “skills”).

Answer: HARDLINER (i.e. “disciplinarian”). Solution is HEARD (i.e. “listened to”) with the E removed (indicated by “exuding energy” – E being a recognised abbreviation of “energy”) and the remainder followed by LINER (i.e. “ship”), like so: HARD-LINER.

Answer: HAVE ANOTHER THINK COMING. Solution satisfies “experience disappointment” – Chambers offers: “(informal) to be wrong in what one thinks (about future events or actions)” – and, taking the phrase literally, to “reconsider approach”. And here was me always thinking it was “thing”. Can’t imagine why.

Answer: ARTISTE (i.e. “performer”). Solution is PART (i.e. “role”) with the first letter removed (indicated by “heading off”) and the remainder followed by IS and TE (i.e. “theatre completely empty”, i.e. the word “theatre” with all its middle letters removed), like so: ART-IS-TE.

Answer: CLINT (i.e. “section of limestone pavement”, specifically “a block forming part of a natural limestone pavement, separated from others by fissures (grikes)” (Oxford)). Solution is C (a recognised abbreviation of “cold” used on taps) followed by LINT (i.e. a type of linen or “dressing”, as opposed to belly-button fluff). One of those “C_I_T, eh? Hmm. I wonder if it’s ‘clint’. Let’s see if it’s ‘clint’. Well bugger me, it is ‘clint’!” moments. It’s nice when that happens.

Answer: MASONRY (i.e. “stonework”). The remainder of the clue plays on how the solution is formed of MARY (i.e. biblical “Virgin”) wrapped around or being “pregnant” with SON, like so: MA(SON)RY.

Answer: PROCRUSTEAN (i.e. “demanding conformity” – Chambers again: “taking violent measures to ensure conformity to a standard. [From Procrustes, a legendary Greek robber, who stretched or cut his captives’ legs to fit a bed]”. Another new one on me, but also interesting. Also, also: sheesh! that’s some serious OCD going on, there). Solution is an anagram (indicated by “terribly”) of POSTURE CAN and R (i.e. “ultimately suffer”, i.e. the last letter of “suffer”). Nicely worked, with an appreciable dash of grim irony!

Answer: IMPEACHMENT (i.e. a “charge against [Richard] Nixon”, 37th President of the United States). “About” indicates anagram. Solution is an anagram of MEN EMPHATIC. Another nicely worked clue.

Answer: MANNEQUIN (i.e. “model”). Solution is MANNER (i.e. “style”) with its last letter removed (indicated by “deficient”) and the remainder followed by QUIN (i.e. “one of five in group”), like so: MANNE-QUIN.

Answer: RESUMED (i.e. “started afresh” – I always thought this was to start from where one left off, but “begin again” seems a widely supported definition). Solution is PRESUMED (i.e. “supposed”) with the first letter removed (indicated by “to have dumped leader”).

Answer: MELILOT (i.e. a grassland “plant”). Solution is an anagram (indicated by “transplanted”) of MOLLIE followed by T (i.e. “beginning [letter] to thrive”). Needless to say, this was another that needed a brute force of my Chambers once I’d had enough letters. Hooray for made-to-fit solutions! Yaayyyy, made-to-fit solutions!!! (Narrator: sadly, only madness lay in store for Mr Poll from that day on…)

Answer: FESS (i.e. “ordinary”. This is all to do with heraldry, it seems. One definition of “ordinary” is “one of a class of armorial charges, figures of simple or geographical form, conventional in character”, while a FESS or FESSE is “one of the simple heraldic forms, a horizontal band over the middle of an escutcheon, usually one third of the whole” (both Chambers)). Solution is FE (chemical symbol of “iron”) followed by SS (i.e. “ship”, specifically a recognised abbreviation of a “steamship”).