A relatively straightforward one after last week’s stinker. A pretty good one too with a few well worked clues. NETIZEN, though? Sheesh. Get with the times, granddad. You’ll be talking about the information superhighway next.

You can find my completed grid below along with explanations of my solutions where I have them. I hope you find them helpful. If a recent Jumbo has leaked all kinds of stories about you to the press, culminating in a court battle that few if anyone gives a shit about, then you might find succour in my Just For Fun page, where you’ll find links to solutions for hundreds of the things. Elsewhere there are the usual ancient book reviews and a story of mine.

Thanks again for the kind words and input. It’s always interesting to hear the thoughts of other solvers once they’ve set down their pens. I’ll be away from the keyboard next weekend so will be a little late in posting the next one. Till then, stay safe out there kids. 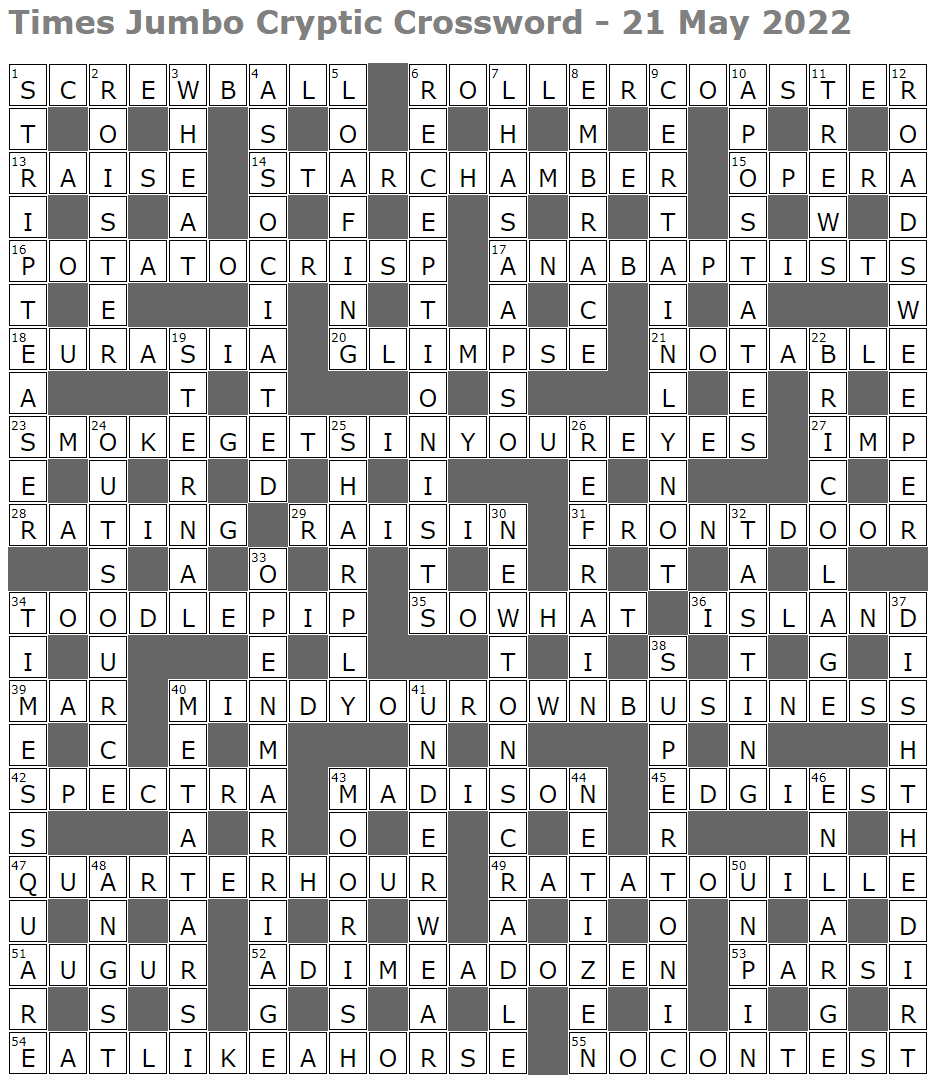 Answer: RAISE (i.e. “lift”). “Maintained by” indicates the solution has been hidden in the clue, like so: B(RA IS E)XTRAORDINARY.

Answer: STAR CHAMBER (i.e. “court once”, being an English court that sat during the 16th century). Solution is STARCH (i.e. “formality”) followed by AMBER (i.e. “warning for driver”).

Answer: OPERA (i.e. “dramatic work”). Solution is P (a recognised abbreviation of “piano” used in musical lingo) placed in or “parting” O’ER (poetic form of “over”) and followed by A, like so: O’(P)ER-A.

Answer: POTATO CRISP (i.e. “crunchy food”). Solution is POT (i.e. “vessel”) followed by an anagram (indicated by “puree of…”) of APRICOTS, like so: POT-ATOCRISP.

Answer: EURASIA (i.e. “massive continent”). Solution is an anagram (indicated by “sacked”) of IRE (i.e. “having lost land, Ireland”, i.e. IRELAND with the LAND removed) and USA followed by A, like so: EURASI-A.

Answer: NOTABLE (i.e. “personage” – over to Chambers: “a person or thing worthy of note, especially in plural for people of distinction and political importance in France in pre-Revolution times”). When written as NOT ABLE the solution also playfully satisfies “listless then?”.

Answer: SMOKE GETS IN YOUR EYES (i.e. “one of Jerome Kern’s” compositions). Clue plays on SMOKE/”smouldering” and EYES/”looks”. You get the idea.

Answer: IMP (i.e. “puck”, a goblin or mischievous sprite). “Initially” indicates the solution comprises the first letters of “is”, “merely” and “prodded”.

Answer: FRONT DOOR (i.e. “one admits”). Solution is FRONT (i.e. to “present”) followed by DONOR (i.e. “giver”) once its middle letter has been removed (indicated by “losing heart”).

Answer: TOODLE-PIP (i.e. “what I said when I pootled off”). Solution is an anagram (indicated by “off”) of I POOTLED followed by P (i.e. “minimum of pretence”, i.e. the first letter of “pretence”), like so: TOODLEPI-P. Nicely done.

Answer: SO WHAT (i.e. “I’m not interested”). When written as SOW HAT the clue playfully satisfies “warmer for pig’s ears”.

Answer: ISLAND. Solution playfully satisfies the clue as a whole, but is also formed from I (i.e. “[Roman numeral] one”) and L (i.e. “location for a start”, i.e. the first letter of “location”) once placed in or having “all round” SAND (i.e. “beach”), like so: I-S(L)AND.

Answer: MIND-YOUR-OWN-BUSINESS (i.e. “the name of a plant” of the nettle family, apparently). When written without the hyphens the solution also satisfies “why should I tell you?”.

Answer: EDGIEST (i.e. “most ill at ease”). Solution is an anagram (indicated by “shapeshifting”) of I’D SEE and GT (i.e. “outline of ghost”, i.e. the first and last letters of “ghost”).

Answer: QUARTER-HOUR (i.e. “time”). Solution is HO (a recognised abbreviation of “house”) placed between or “connecting” QUARTER (i.e. “district”) and UR (i.e. an “old city” often used by setters in their clues), like so: QUARTER-(HO)-UR.

Answer: AUGUR (i.e. “prophet”). Solution is AUGUST (i.e. “respected”) with the ST removed (indicated by “no way” – ST being a recognised abbreviation of a street) and the remainder followed by R (i.e. “ending in gutter”, i.e. the last letter of “gutter”), like so: AUGU-R.

Answer: EAT LIKE A HORSE. Solution satisfies “be a pig” while playing on “stallion”/HORSE.

Answer: RECEPTIONISTS (i.e. “those perhaps working for a hotel”). “Knotted” indicates anagram. Solution is an anagram of INSPECTOR TIES.

Answer: CERTAINLY NOT (i.e. “never”). “When circulating” indicates anagram. Solution is an anagram of INTERACT ONLY.

Answer: TREWS (i.e. “bags of Scottish” – bags and trews are informal references to trousers). “First of all” indicates the solution is derived from the initial letters of “tenacity”, “rarely”, “evident”, “with” and “Scottish”.

Answer: STERNAL (i.e. “relating to a bone”, the sternum). Solution is S (a recognised abbreviation of “second”) followed by ETERNAL (i.e. “constant”) once its initial letter has been removed (indicated by “not first”), like so: S-TERNAL.

Answer: BRICOLAGE (i.e. “makeshift construction” – over to Chambers again: “a work of art or construction put together from whatever materials are available”). Solution is BRIDGE (i.e. “joiner”) with the D removed (indicated by “short in diameter” – D being a recognised abbreviation of “diameter”) and the remainder wrapped around or “crossing” COLA (i.e. “drink”), like so: BRI(COLA)GE. One nailed from the wordplay and a short brute force of Chambers.

Answer: OUTSOURCE (i.e. “buy from another company”). “To engineer” indicates anagram. Solution is an anagram of COURTEOUS. Nicely played. Probably my favourite clue of the puzzle.

Answer: REFRAIN. Solution satisfies “stop” and a “repeating phrase” in music or poetry.

Answer: NEWTON’S CRADLE (i.e. “item on executive’s desk”). Clue plays on how the toy demonstrates the conservation of momentum using a frame and five suspended metal balls. An end ball is swung or “knocked” into the others. This kicks out the ball at the opposite end while leaving the middle three balls stilled. It’s witchcraft, I tell you.

Answer: OPEN MARRIAGE. Clue plays on how weddings are sometimes referred to as “matches” in cryptic crosswords, and how in open marriages spouses are comfortable for the other to “play away”.

Answer: DISH THE DIRT. Clue plays on the phrase describing “mud”-slinging, and how “pies” are DISHES. You get the idea.

Answer: SUPERTONIC (i.e. “second note” – over to Chambers again: “the second degree of the diatonic scale, e.g. D in the scale of C”). “Tremulous” indicates anagram. Solution is an anagram of PUT IN SCORE.

Answer: METATARSI (i.e. “bones”). Solution is an anagram (indicated by “breaking”) of AT TIMES and AR (i.e. “are almost”, i.e. the word “are” with the last letter removed).

Answer: ANGST (i.e. “worry”). Solution is ST (a recognised abbreviation of “stone”) placed after or “under” – this being a down clue – FANG (i.e. “tooth”) once its first letter has been removed (indicated by “missing crown”), like so: ANG-ST.

Answer: UNPIN (i.e. “release”). Solution is P (a recognised abbreviation of “pressure”) placed “in” UNION (i.e. “marriage”) once the O has been removed (indicated by “loveless”, again love being a zero score in tennis), like so: UN(P)IN.