A medium strength puzzle rather than the Bank Holiday stinker that was perhaps feared. I don’t mind that! It was a pretty decent one too, save for the traditional recent repeat. You can find my completed grid below along with explanations of my solutions where I have them. I hope you find them useful.

If a recent Jumbo is exhibiting a few gaps then my Just For Fun page might help you out, where I’ve compiled links to solutions for the last 100+ of these things. There are also the usual ancient book reviews and a story of mine.

Thanks once again for the kind words and comments, folks. They are always appreciated and are always interesting to read. Till next time, stay safe, mask up, get vaccinated and keep supporting the NHS and key workers everywhere. 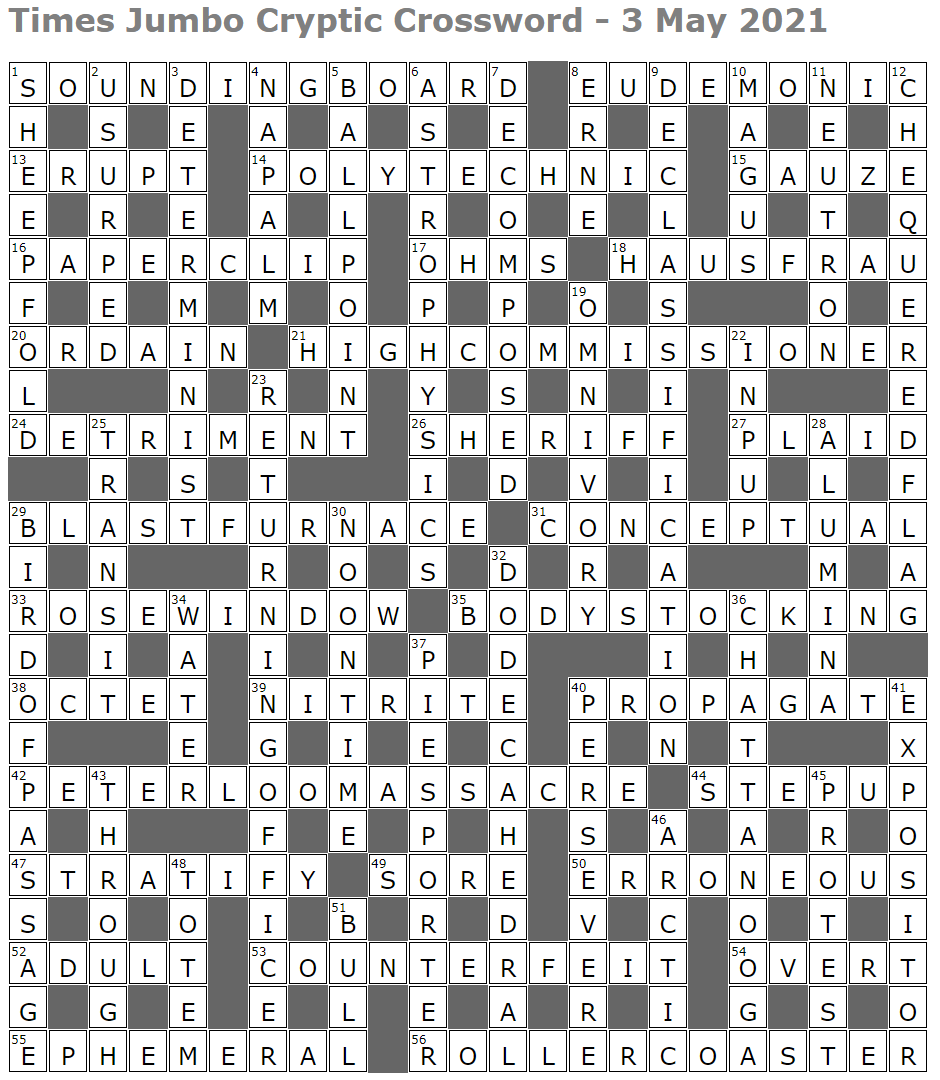 Answer: SOUNDING BOARD (i.e. “source of feedback”). Solution is SOUND (i.e. “sensible”) and BOARD (i.e. “directors” of a company) wrapped around or “gathering” IN and G (a recognised abbreviation of “good”), like so: SOUND-(IN-G)-BOARD.

Answer: EUDEMONIC (i.e. “promoting happiness” – over to Chambers: “a system of ethics that makes happiness the test of rectitude”). Solution is EU (i.e. “international group”, specifically the European Union) followed by DEMONIC (i.e. “evil”). Gotten from the wordplay and a look in Chambers.

Answer: ERUPT (i.e. “explode”). Solution is PURE (i.e. complete and “utter”) reversed (indicated by “about”) and followed by T (a recognised abbreviation of “time”), like so: ERUP-T.

Answer: POLYTECHNIC (i.e. “college”). “Supply” indicates anagram, as in being supple. Solution is an anagram of HELP TO CYNIC.

Answer: OHMS. A bit of a guess, this, given they are units of electrical “resistance” and the word has HM or His or Her Majesty, i.e. “monarch”, in the middle. That’s about it, though. The remaining letters OS could represent an Ordinary Seaman, who could be said to “serve”, but this feels much too weak. Moving on with my life…
[EDIT: Thanks to a number of commenters for pointing out OHMS stands for On Her Majesty’s Service. Well, I was halfway there! Cheers, all! – LP]

Answer: HAUSFRAU (i.e. “her indoors”). Solution is an anagram (indicated by “tailor”) of HAS FUR followed by AU (chemical symbol of “gold”), like so: HAUSFR-AU.

Answer: CONCEPTUAL (i.e. “kind of art”). Solution is C (i.e. “about”, specifically a recognised abbreviation of “circa”) followed by an anagram (indicated by “kinky”) of TO CLEAN UP, like so: C-ONCEPTUAL.

Answer: ROSE WINDOW (i.e. “decorative glass”). Solution is ROSE (i.e. “wine”) followed by WIDOW (i.e. “single lady”) once wrapped around or “drinking in” N (a recognised abbreviation of “new”), like so: ROSE-WI(N)DOW.

Answer: OCTET (i.e. “group” of musicians). “Captured by” indicates the solution has been hidden in the clue, like so : PHIL(OCTET)ES.

Answer: PETERLOO MASSACRE (i.e. “Government crackdown” of 1819 that left 11 demonstrators dead and hundreds others injured). Solution is LOO (i.e. “can” – both slang for a toilet) and MASS (i.e. “come together”) both placed “in” PETER (i.e. a slang word for a “safe” you sometimes see in these things) and ACRE (i.e. “area”), like so: PETER-(LOO-MASS)-ACRE.

Answer: STEP UP (i.e. “increase”). Solution is PE (i.e. “exercise”, specifically Physical Education) placed “in” PUTS (i.e. “places”). The whole is then reversed (indicated by “to the west” – this being an across clue), like so: ST(EP)UP.

Answer: ADULT (i.e. “in the majority” – a major being an adult; a minor being a child). Solution is ADULTEROUS (i.e. “unfaithful”) with the last half lopped off (indicated by “not half”).

Answer: EPHEMERAL (i.e. short-lived or “passing”). Solution is ME (i.e. “this person”) placed in or “blocking” an anagram (indicated by “off”) of A HELPER, like so: EPHE(ME)RAL.

Answer: DETERMINIST (i.e. “allowing no freedom” – determinism is the belief that everything in the future is preordained). Solution is DETER (i.e. “scare off”) followed by MINI (i.e. “car”) and ST (a recognised abbreviation of “street”).

Answer: NAPALM (i.e. “weapon”). Solution is NAM (i.e. “where [napalm] was used”), i.e. during the Vietnam war, once wrapped “around” PAL (i.e. “china” – ignore the misleading capitalisation; china is cockney rhymin’ slang, innit, for “mate”, as in china plate), like so: NA(PAL)M.

Answer: ASTROPHYSICS (i.e. “discipline”). “Bum” indicates anagram. Solution is an anagram of HIT SPY ACROSS. With ASTROPHYSICIST appearing only three weeks ago, it appears another Times setter has cranked up the office Marconi GridFill 4000TM. Ho and hum. If you’d like to know more about the GridFill 4000, here’s a snippet from its Wikipedia page, the link for which I’ve conveniently misplaced:

Released at the height of the dot-com boom of the late 1990s, the Marconi GridFill 4000TM was the last in a line of web-enabled devices that helped crossword setters repeatedly slot the same solutions into their grids. Boasting then-revolutionary machine learning techniques, “Griddy” would examine thousands of completed grids to develop a rudimentary neural network that recorded the grid fragments surrounding each solution. The GridFill 4000 would then produce fuzzy links between the intersecting words to solutions, thus training it to stitch the same solutions into successive grids in as few moves as possible. This had the added benefit of allowing setters to squeeze more repeated solutions into their grids. The Times newspaper was an early adopter of the GridFill, going on to purchase an undisclosed number of devices with each major release. (…) The Marconi GridFill 4000TM has the distinction of holding the title of Most Spurious Web-Enabled Device in PC Pro magazine’s “A-List” for over a decade, extending some years beyond the collapse of Marconi itself. It was only recently knocked off the top spot by a succession of blockchain-enabled domestic appliances.

Answer: DECOMPOSED (i.e. “broken down”). Solution is DEC (i.e. “month”, specifically December) followed by O (a recognised abbreviation of “old”) and an anagram (indicated by “new”) of MOPEDS, like so: DEC-O-MPOSED.

Answer: ERNE (i.e. “bird”). Solution is ERNIE “Wise”, one half of comedy duo Morecambe & Wise, with the I removed (indicated by “to release [Roman numeral] one”).

Answer: DECLASSIFICATION (i.e. “making public”). Solution is DEIFICATION (i.e. “act of worship”) wrapped around or “including” CLASS (i.e. “students”), like so: DE(CLASS)IFICATION.

Answer: MAGUS (i.e. “old priest”). Solution is MAG (i.e. “Time”, as in Time magazine) followed by US (i.e. “upsets heartless”, i.e. the word “upsets” with all its middle letters removed).

Answer: IN PUP (i.e. “about to drop litter”). Solution is IN PUB (i.e. “where drinkers are” – not quite yet, bloody Covid, but we’re getting there) with its last letter removed (indicated by “mostly”) and the remainder followed by P (a recognised abbreviation of “parking” used on maps and signage), like so: IN-PU-P.

Answer: RETURNING OFFICER (i.e. “one announcing results” of an election). Solution is RE (i.e. “on” or regarding – think email replies) followed by TURNING OFF (i.e. “stopping working”) and ICER (i.e. “cake-maker”). A female colleague at work is astonishingly good at making cakes. Like, holy-smokes-good; like you don’t want to take a knife to the things because they look incredible. Makes you wonder what’s it like to be talented!

Answer: DODECAHEDRAL (i.e. a figure “having many faces”, twelve to be exact. Fitting, given the previous solution). “In disguise” indicates anagram. Solution is an anagram of A COLD REDHEAD.

Answer: WATER (i.e. “drink”). Solution is WASTER (i.e. “idler”) with the S removed (indicated by “putting away small” – S being a recognised abbreviation of “small”).

Answer: PIESPORTER (i.e. a German “wine”). Solution is PIES (i.e. “pastries”) followed by PORTER (i.e. “drink”). Chalk one to my Bradford’s here as my knowledge of wines stops at vino collapso. I don’t think I’d trust myself to order a bottle of this after a few glasses.

Answer: PERSEVERE (i.e. “display determination”). Solution is PER (i.e. “a”, as in “three times a year”) followed by SEVERE (i.e. “spartan” – ignore the misleading capitalisation).

Answer: THROUGH (i.e. “by”). Solution is THE ROUGH (i.e. “bad place to be after driving” or teeing off in golf) with the E removed (indicated by “dropping ecstasy” – E being a street name for the drug).

Answer: ARCTIC (i.e. “freezing”). Solution is C (a recognised abbreviation of “cold” used on taps) placed “in” ARTIC (i.e. “large vehicle”, short for an articulated lorry), like so: AR(C)TIC.

Answer: TOTEM (i.e. “symbolic artefact”). Solution is MET (i.e. “filled” or satisfied) followed by OT (i.e. “scripture”, specifically the Old Testament of The Bible). These are then reversed (indicated by “the wrong way”), like so: TO-TEM.