There’s a certain whiff of someone trying too hard in this week’s puzzle. There were good clues to be had, don’t get me wrong, but some others didn’t quite elicit the “ooh, that’s clever” response the setter may have wanted. Then again, my mood’s been through the floor for much of this week, so it could just be me being a grumpy bugger.

As ever, you can find my completed grid below along with explanations of my solutions where I have them. I hope you find them helpful. You can find links to solutions to the last 100+ of these things on my Just For Fun page should a recent Jumbo have done for you. While you are here, I’ve also got some mouldy old book reviews and a story of mine.

This post marks my first concerted effort to stick with WordPress’s new editor. I’ve had to make some formatting changes to lessen the overheads caused by some of the new editor’s idiot design choices, but there’s nothing too controversial I hope. I’ll still highlight the stuff I’m not sure about in dark bloody red, but other than that welcome to Pleasantville.

Anyway, time’s getting on and this week’s been rubbish. I hope yours has been better. Till next time, stay safe, mask up and keep supporting the NHS and key workers everywhere. 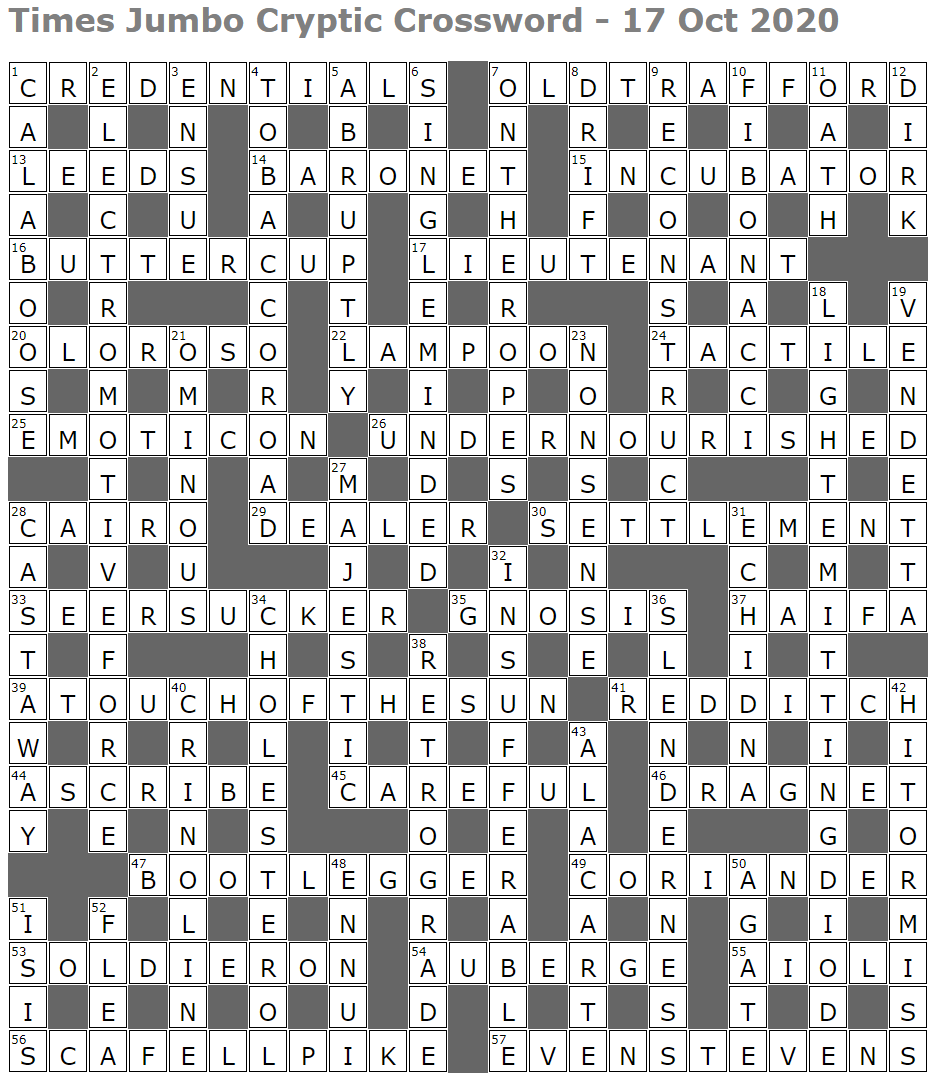 Answer: OLD TRAFFORD (i.e. “football stadium”). Solution is OLD (i.e. “former”) followed by TR (an abbreviation of “treasurer” not recognised by my Chambers, Oxford or Bradford’s, but is listed in my Collins Concise) and AFFORD (i.e. “to provide”).

Answer: BARONET (i.e. “minor noble”). Solution is BAYONET (i.e. “weapon”) with R (a recognised abbreviation of “right”) replacing (indicated by “for”) Y (i.e. “unknown” – setters love referring to X Y or Z in solutions as unknowns), like so: BA(Y)ONET => BA(R)ONET.

15. Broody hen at home getting youngster area to run (9)

Answer: BUTTERCUP (i.e. “meadow plant”). Solution is BUTTER (i.e. “goat, perhaps”, as in how they are known to headbutt things) followed by C (a recognised abbreviation of “caught” used in several ball games), then UP.

Answer: OLOROSO (i.e. “dark sherry”). Solution is an anagram (indicated by “rum”) of SOLO OR and O (a recognised abbreviation of “old”).

29. Expensive importing French article? One might find it so (6)

Answer: DEALER. Solution is DEAR (i.e. “expensive”) wrapped around or “importing” LE (i.e. “French article”, i.e. the French for “the” – an article being a word like a, an or the), like so: DEA(LE)R. Within the context of the clue, a DEALER is someone engaging in a transaction. I’d argue the likes of shipping agents would handle the importing of stuff rather than the people trading or dealing the goods, but what do I know. Weak, in any case.

Answer: SEERSUCKER (i.e. “fabric”). Solution is SUCKER (i.e. “one easily taken in” or fooled) placed after or “by” SEER (i.e. “Sibyl, perhaps” – other oracles are available), like so: SEER-SUCKER. One I remembered from a previous solution, TBH.

Answer: HAIFA (i.e. “port” of Israel). The setter has gone off on their own here, so watch out. Bradford’s offers HAIFA (if the setter is inclined to use a lazy solution to bail them out of an awkward spot then I’m going to be equally lazy in solving it), and I can see the solution is hidden in the first one or two letters of HAS ITS FANS, but I can’t see how the remainder of the clue gets you there. If someone swings by with the lowdown on this one then I’ll update the post.
[EDIT: Some excellent work from Steve in the comments nails this one. The solution is HAS ITS FANS with every letter after I in the alphabet removed, as indicated by “I must be the latest to be included among those”. While part of me thinks “trying too hard again!”, another appreciates the setter trying to bring some fresh wordplay into the mix. Either way, hats off to Steve! – LP]

Answer: A TOUCH OF THE SUN (i.e. “effect of exposure”). “Turning” indicates anagram. Solution is an anagram of TO SUCH HUE OF TAN.

Answer: AUBERGE (i.e. “Parisian inn” – also Chris Rea’s best song by a country mile, in case there was anyone left in the universe who thought I was cool). Solution is AGE (i.e. “time”) wrapped around or “accepting” UBER (i.e. “taxi firm”), like so: A(UBER)GE.

Answer: AIOLI (i.e. a rather nice garlicky “dressing”). “Regularly used” indicates the solution is derived from every other letter of CALICO PLAIN.

56. Stick around restaurant by large lake and mountain (7,4)

57. Venerable chap in English society is quite well-balanced? (4-7)

Answer: CALABOOSE (i.e. slang name for “jail”). Solution is C (a recognised abbreviation of “caught” used in a number of ball games) followed by A and AB (i.e. “sailor”, specifically of the Able-Bodied variety) once this latter has been placed or “locked up in” LOOSE (i.e. “lax”), like so: C-A-L(AB)OOSE.

Answer: ELECTOMOTIVE FORCE (i.e. “what [electromagnetic] wave power generates”). “Shortly found in…” plays on how its abbreviated form, EMF, can be found in BloEMFontein. See what I mean about the setter trying too hard? Good grief.

4. Distributed coca to broad in novel of poor Americans (7,4)

Answer: TOBACCO ROAD (i.e. a 1932 “novel of poor Americans” by Erskine Caldwell – everyday reading, then). “Distributed” indicates anagram. Solution is an anagram of COCA TO BROAD.

5. After a key game, pint emptied lustily and rapidly (8)

Answer: ABRUPTLY (i.e. “rapidly”). Solution is A followed by B (i.e. “[musical] key”), then RU (i.e. “game”, specifically Rugby Union), then PT (a recognised abbreviation of “pint”) and LY (i.e. “emptied lustily”, i.e. the word “lustily” with all its middle letters removed).

7. Some Hellespont hero, pessimistic and near defeat (2,3,5)

Answer: ON THE ROPES (i.e. “near defeat”). “Some” indicates the solution has been hidden in the clue, like so: HELLESP(ONT HERO PES)SIMISTIC.

8. State of indecision is Democrat fault (5)

Answer: DRIFT (i.e. “state of indecision” – topical, given the pitched battle currently going on between local and central governments over their Covid response). Solution is D (a recognised abbreviation of “Democrat”) followed by RIFT (i.e. “fault”).

Answer: RECONSTRUCT (i.e. “fashion again”). Solution is an anagram (indicated by “shocking”) of COST and CURRENT.

10. Series creator coming up with some Wiccan obi fantasy (9)

Answer: FIBONACCI (i.e. “series creator”, referring to a sequence of numbers he devised that have since been observed in a spooky number of other areas, from nature to several branches of mathematics. The word “observed” is key here for this sceptic, as in not necessarily “proven”. It reminds me of a stockbroker who once upon a time enthusiastically espoused the Fibonacci sequences he and his peers had detected in market patterns, seemingly oblivious to the umpteen self-fulfilling prophecies like it that had helped fuel every boom and bust since the dawn of finance. But I digress…) “Some” indicates the solution has been hidden in the clue, while “coming up” indicates the solution has been reversed – this being a down clue – like so: W(ICCAN OBI F)ANTASY. Another clue that’s trying too hard, but I do like what the setter was trying to do.

Answer: OATH (i.e. a curse word, “obscenity”, or, if you’re showing off, an imprecation) (Puts away thesaurus.) Solution is O (a recognised abbreviation of “old”) followed by an anagram (indicated by “unfortunately”) of HAT, like so: O-ATH.

Answer: DIRK (i.e. “a dagger” – chalk another to my Bradford’s). “Gently featured in detective fiction” refers to Dirk Gently, holistic detective and central character of two-and a-bit Douglas Adams novels. This nerd approves! This nerd also rather liked the Netflix series. Shame it got cancelled.

18. Brilliant device Liberal European Democrat may be confused with? (5-8,5)

Answer: LIGHT-EMITTING DIODE (i.e. “brilliant device” – brilliant as in being very bright, though they’re also rather nifty little things). After the exploits demonstrated in 2d, it might not surprise you to learn the rest of the clue plays on how the solution’s shortened form, LED, is also the initials of “Liberal European Democrat”.

21. Extremely worrying when some fine house gets stripped (7)

Answer: OMINOUS (i.e. “extremely worrying”). “Gets stripped” indicates the solution is derived by removing the first and last letters of SOME FINE HOUSE.

27. Most impressive crack I found in waterproof coat (8)

28. Perhaps Crusoe’s reason for putting nothing on? (8)

Answer: CASTAWAY (i.e. “perhaps Crusoe”, referring to the central character of Daniel Defoe’s Robinson Crusoe). “Reason for putting nothing on” is a play on how a theatre might have nothing on as the CAST is AWAY. Something like that.

Answer: ECHIDNA (i.e. “spiny anteater” – chalk another to my Bradford’s here. Anteaters aren’t interesting enough to warrant extra names. I’d stake my zoology degrees on it. (Looks to camera.)) Solution is HID (i.e. “concealed”) placed “in” an anagram (indicated by “tangled”) of CANE, like so: EC(HID)NA.

32. Too much is coverable without following fine English (12)

Answer: INSUFFERABLE (i.e. “too much”). Solution is INSURABLE (i.e. “coverable”) wrapped around or placed “without” F (a recognised abbreviation of “following”), F (ditto “fine”) and E (ditto “English”), like so: INSU(F-F-E)RABLE.

Answer: CHOLESTEROL (i.e. “harmful substance”). Solution is SCHOOL with the S removed (indicated by “banning son” – S being a recognised abbreviation of “son”), and the remainder placed “about” LESTER (i.e. “boy” – bloody hell, how hateful a parent must you be to name your child Lester? Have a word…) like so: CHO(LESTER)OL.

Answer: SLENDERNESS (i.e. “absence of large figure”). Solution is S (a recognised abbreviation of “small”) followed by LENDER (i.e. “building society”) and NESS (i.e. “head” – both as in the geographic feature).

Answer: RETROGRADE (i.e. “backing”). Solution is RE (i.e. “note” in the do-re-me scale, sometimes anglicised as “ray”) wrapped “about” PETROGRAD (i.e. “Leningrad formerly”) once its initial letter has been removed (indicated by “removing leader”), like so: R(ETROGRAD)E.

40. Credit one number with style for female garment (9)

Answer: ENNUI (i.e. “tiredness”). “Regularly used” indicates the solution can be derived by taking every other letter of SEEN INSULIN.

51. Time of difficulty, not leading pair to find goddess (4)

And now, apropos of nothing, here’s a rundown of the tip-top choonage that accompanied the production of this post. There may be rock.
(Insert devil-horns-hand-sign emoji here.)

Des Rocs – Let The Vultures In (“Let Me Live/Let Me Die” and “Used to the Darkness” especially – modern goth is alive! …or undead at least)
Dorothy – ROCKISDEAD (“Dark Nights” is my new obsession; like a power-trippin’ Dolly Parton)
Dorothy – 28 Days In The Valley (cleaned up sound – still pretty good; looking forward to next album)
Royal Blood – Trouble’s Coming (looking forward to their new album)
Rival Sons – Feral Roots (if you liked Bad Company and old school Aerosmith, you’ll love these)
Airbourne – Black Dog Barking (ditto AC/DC and Alice Cooper)
Airbourne – Runnin’ Wild
Volkor X – This Means War (the last 4 mins of the title track is guitar-wangling bliss)
Volkor X – This Is Our Planet Now (“Shoot Them Up” especially – brilliantly cheesy!)