Back to a medium strength puzzle after last week’s stinker. It was another good ‘un too, with a healthy dollop of well-written clues marred only by yet another appearance of AT A LOOSE END. When I cast an initial glance over the clues and saw blah, blah, blah (2,1,5,3), I immediately thought AT A LOOSE END and genuinely groaned when I actually read the clue. I rather liked how setters were slotting different shapes into their grids earlier this year, but sticking the same solution in week-in-week-out feels a bit cheap. Maybe Max ERNST will start haunting these pages again…

Anyway, minor bellyaching aside, you can find my completed grid below along with explanations of my solutions where I have them. I hope you find them useful. If a previous Jumbo has done for you, then you might find succour in my Just For Fun page, where you’ll find links to solutions for the last 100+ of these things. I’ve also got a dusty collection of book reviews and a story of mine knocking about the place.

In other news, I’ve tried to persevere again with WordPress’s new editor – the one I’m being increasingly pressured to use – and once more had to work around it, reverting to the old editor. Sadly the new editor is poor, enforcing concepts like document blocks which don’t lend themselves easily to these kinds of posts, plus it hides useful controls away in cumbersome menus and no longer recognises often-used keyboard shortcuts. (No Ctrl+U for underline? Seriously?) Producing these posts in the new editor is like pulling teeth. I really appreciate the kind words and assistance I receive in the comments each week, so I’ll have a think on how to continue these posts once WordPress finally kills off its classic editor. Would anyone object to me posting these things as PDFs, for example? Would that adversely affect accessibility for anyone? Let me know in the comments.

Till next time, stay safe, mask up and keep supporting the NHS and key workers everywhere, especially as this second wave of Covid ticks ever upwards. And to the anti-lockdowners who leafleted my neck of the woods this weekend: try being a little less paranoid. Wearing a mask isn’t going to kill you. The restrictions on our lives aren’t going to be permanent. This isn’t the thin end of the wedge that’ll see government stormtroopers goose-stepping up and down Main Street. By all means moan about the state of things, but let’s also get some perspective on this. Also, thank you for closing my gate. 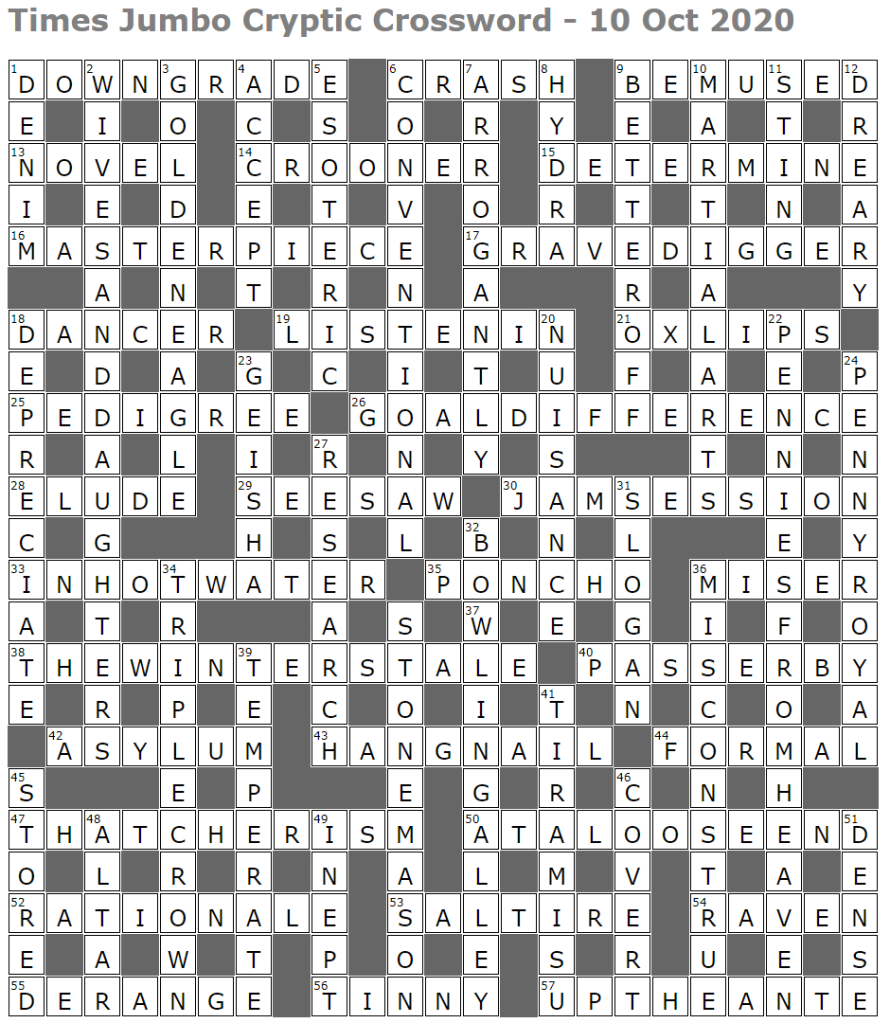 Answer: BEMUSED (i.e. “caused bewilderment”). Solution is MUSE (i.e. “source of inspiration”) placed in BED (indicated by “after retirement perhaps”, a play on how MUSE has been put to bed), like so: BE(MUSE)D.

13. Book first of vacations in time for Christmas (5)

Answer: CROONER (i.e. “singer”). Solution is CROP (i.e. “cut”) with the last letter removed (indicated by “short”) and followed by RENO (i.e. “city in Nevada”) reversed (indicated by “heading west” – this being an across clue), like so: CRO-ONER.

15. Decide to turn off before quarry, possibly (9)

Answer: DANCER (i.e. one of Santa Claus’s “reindeer”). Solution is DANCE (i.e. “mashed potato” – ask your grandparents, kids) followed by R (a recognised abbreviation of “run” used in a number of ball games).

Answer: OXLIPS (i.e. “yellow flowers”). Solution is OX (i.e. “neat” – an alternative meaning of the word is “an ox, cow or bull” (Chambers)) followed by LIPS (i.e. “borders”). One I remembered from a previous puzzle, if I’m honest.

Answer: PEDIGREE (i.e. “family”). Solution is an anagram (indicated by “unfortunately”) of EDGIER placed “after” PE (i.e. “gym” or Physical Education), like so: PE-DIGREE.

Answer: ELUDE (i.e. “baffle”). Solution is DELUDE (i.e. “fool”) once the first letter has been removed (indicated by “hiding face”).

29. Spot used to be put back for playground attraction (6)

Answer: IN HOT WATER. Clue plays on how serious on-field offences in sports can warrant a player being dismissed from the game, often called “being sent for an early bath”, which places them in trouble or IN HOT WATER with their teammates. Also plays on how baths generally place you IN HOT WATER, unless you are one of those people who for some reason like ice baths. Brrr!

Answer: PONCHO (i.e. “cloak”). “Carried by” indicates the solution has been hidden in the clue, like so: RI(PON CHO)RISTER.

Answer: MISER (i.e. “one like Harpagon”, central character of Molière’s The Miser). Solution is MISERY (i.e. “intense discomfort”) with its last letter removed (indicated by “endlessly”).

Answer: THE WINTER’S TALE (i.e. “play” by William Shakespeare). “Broadcast” indicates anagram. Solution is an anagram of A HIT NEWSLETTER.

40. Old-fashioned Republican next to witness (6-2)

Answer: ASYLUM (i.e. “sanctuary”). Solution is A followed by Y (a recognised abbreviation of “year”) once it has been placed “in” SLUM (i.e. “mean accommodation”), like so: A-S(Y)LUM.

Answer: HANGNAIL (i.e. “cause of a sore finger”, being “a torn shred of skin beside the fingernail” (Chambers)). Solution is HANG (i.e. a euphemism for “damn”) followed by NAIL (i.e. “tack”).

Answer: FORMAL (i.e. “precise”). Solution is FOR (i.e. “as regards”) followed by MALL (i.e. “shopping centre”) once its last letter has been removed (indicated by “unfinished”), like so: FOR-MAL.

Answer: THATCHERISM (i.e. “policy back in the 1980s”). “Somehow” indicates anagram. Solution is an anagram of SMART HI-TECH.

Answer: Your weekly appearance of AT A LOOSE END, folks (i.e. “bored”). Solution is A (a recognised abbreviation of “answer”, as in Q&A) followed by an anagram (indicated by “specially prepared”) of EAT NOODLES, like so: A-TALOOSEEND.

Answer: RAVEN (i.e. “black”). Solution is CRAVEN (i.e. cowardly or “yellow”) with the C removed (indicated by “cape missing” – C being a recognised abbreviation of “cape”, the geographic feature).

Answer: TINNY (i.e. “can of beer in Perth” – Perth in this case being the one in Australia. I love how, during one recent Boxing Day test at the Melbourne Cricket Ground, fans were reminded that they were limited to bringing in one case of beer per person – my kind of people!). Solution is N (a recognised abbreviation of “noon”) “around” which is placed TINY (i.e. “wee”), like so: TI(N)NY.

Answer: DENIM (i.e. “material”). Solution is MINED (i.e. “excavated”) reversed (indicated by “mounted” – this being a down clue).

Answer: WIVES AND DAUGHTERS (i.e. “book” by Elizabeth Gaskell). Clue plays on how wives and daughters are often “members of the clan” or family.

5. Circle in compound on island, circle initially difficult to understand (8)

Answer: HYDRA (i.e. mythical “monster”). “In” indicates the solution has been hidden in the clue, like so: BINC(HY DRA)MA.

Answer: MARTIAL ARTS (i.e. “karate, etc”). Solution is a homophone (indicated by “reportedly”) of MARSHAL (i.e. “officer”) followed by DARTS (i.e. “game”) once its first letter has been removed (indicated by “heading off”).

Answer: PENNIES FROM HEAVEN. Solution satisfies “song” from the film of the same name, and “unexpected benefit”.

27. Look into touching prior to examination (8)

Answer: RESEARCH (i.e. “look into”). Solution is RE (i.e. “touching [on]” or regarding – think email replies) followed by SEARCH (i.e. “examination”).

Answer: SLOGAN (i.e. “jingle”, both taken to mean catchy arrangements of words used to advertise products). Solution is SLOG (i.e. “work hard”) followed by A and N (a recognised abbreviation of “new”).

Answer: BOWLING ALLEY. Clue plays on how “spares” in tenpin bowling are where you knock over your pins with a ball to spare, and how the sport takes place on “lanes”. You get the idea.

Answer: TRIPLE CROWN (i.e. “papal tiara”). Solution is TRIPE (i.e. “nonsense”) wrapped or “written about” L (a recognised abbreviation of “large”) and followed by CROWN (i.e. “cap”), like so: TRIP(L)E-CROWN.

Answer: MISCONSTRUE (i.e. “wrongly interpret”). Solution is MISS (i.e. “young lady”) wrapped around or “defending” CON (i.e. “argument against”, as in pros and cons) and followed by TRUE (i.e. “correct”), like so: MIS(CON)S-TRUE.

Answer: STONEMASON (i.e. “his business may be flagging”, referring to flagstones). “Off” indicates anagram. Solution is an anagram of MAN SOON SET.

45. Kept being annoyed about time taken by duke (6)

Answer: ALTAR (i.e. “where knot may by tied” – tying the knot meaning to get married). Solution is A TAR (an informal term for “a sailor”) wrapped around or “holding” L (a recognised abbreviation of “line”), like so: A-(L)-TAR.

49. Delicate point, female being sacked for showing no skill (5)

Answer: DENSE (i.e. “slow to understand”). Solution is D (a recognised abbreviation of “Democrat”) followed by TENSE (i.e. “unable to relax”) once the first letter has been removed (indicated by “blowing top”), like so: D-ENSE.