Not sure whether this was a toughie, or whether my brain was not entirely on it. (I am on hols, so there’s that.) Got there eventually. You can find my completed grid below along with explanations of my solutions where I have them. I hope you find them helpful.

As ever, some hawking before we jump in. You can find solutions to previous solutions on my Just For Fun page. I’ve also got some mouldy old book reviews and a story of mine.

I don’t usually produce posts for the Times crossword found in the main paper, but one clue stood out for me today (well, yesterday, I suppose): His poetry no-go, his prose uneven? (3) The solution is Edgar Allan POE, being POETRY without the TRY (hinted at by “no-go”) and all the odd or “uneven” letters of PROSE. Best clue I’ve seen for ages.

Anyway, till next time, keep the flag flying for the NHS and key workers everywhere, mask-up and keep safe.

P.S. Dear WordPress, your “easier way to create posts” that you are going to eventually force upon us is a bag of balls. It’s time-consuming enough putting these posts together without some undoable bullshit editor fighting me every step of the way. Not everything that looks like a numbered list is a numbered list! I honestly couldn’t switch back to the old editor fast enough. Now please excuse me, I’ve got some looms to smash up. 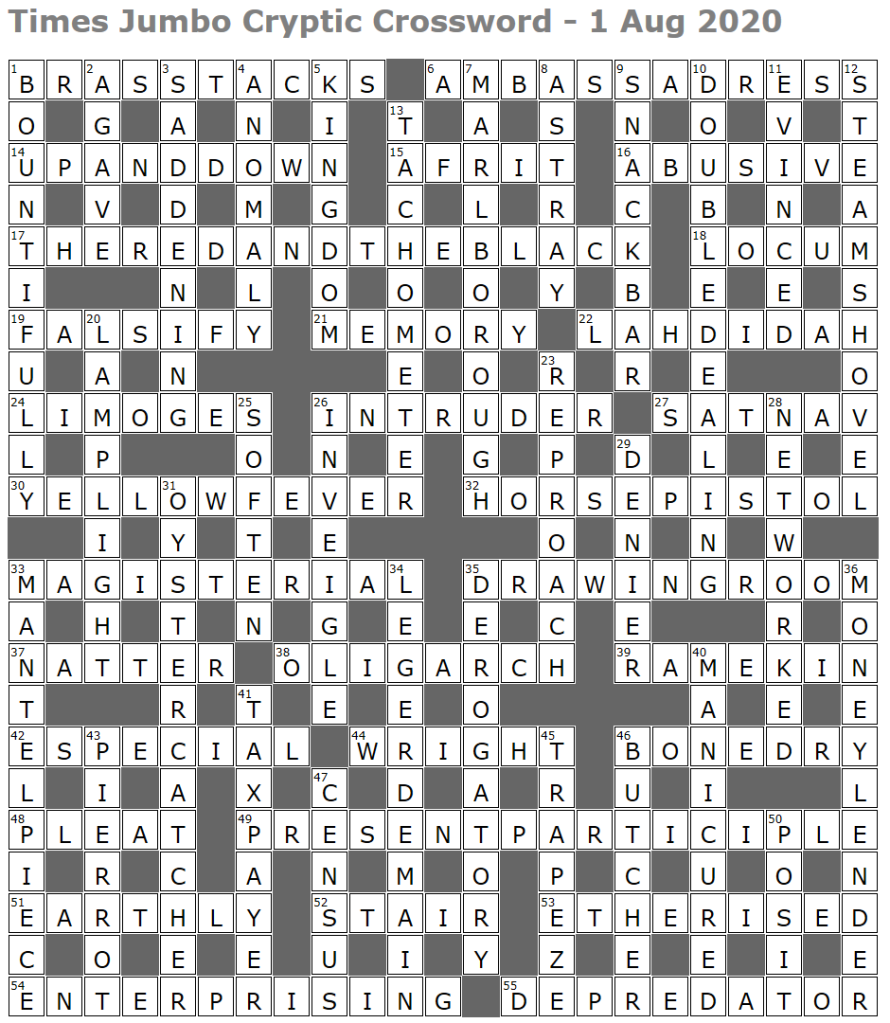 6. Official voice possessed by a graduate with robe (12)

16. This person’s on army’s first vehicle in offensive (7)

Answer: ABUSIVE (i.e. “offensive”). Solution is I’VE (i.e. “this person’s” – we’ve seen this sneaky bit of wordplay recently: “this person’s” is a contraction of “this person has” (it doesn’t matter that the clue no longer scans well, so long as it disguises what the setter is playing at); from the point of view of the setter, this equates to “I have”, which contracts to I’VE) placed “on” or after A (i.e. “army’s first”, i.e. the first letter of “army”) and BUS (i.e. “vehicle”), like so: (A-BUS)-I’VE.

Answer: THE RED AND THE BLACK (a “novel” by Stendhal, which “tells the story of Julien Sorel’s life in France’s rigid social structure restored after the disruptions of the French Revolution and the reign of Napoleon Bonaparte” (Wikipedia). Sounds laugh-a-minute.) Solution riffs on how bank “accounts” can be in the red (i.e. owing money) or in the black (i.e. holding money).

Answer: FALSIFY (i.e. “cook”, as in cooking the books). Solution is F (a recognised abbreviation of “fine” used in grading pencils) followed by SALSIFY (i.e. “edible root”) once the initial letter has been removed (indicated by “wanting starter”), like so: F-ALSIFY. Became obvious once I had all the intersecting letters but took a brute force of Chambers to get SALSIFY.

Answer: MEMORY (i.e. “Cats track”, as in a song from the musical Cats). Solution is ME (i.e. “mouse heartlessly”, i.e. the word “mouse” with its middle letters removed) followed by MO (a contraction of moment, or a “second”) and RY (i.e. “track”, specifically a recognised abbreviation of “railway”).

Answer: LAH-DI-DAH (i.e. “fancy”). Solution is HAD I DHAL (i.e. “if I possessed lentils” – a dhal or dal is a pea-like plant cultivated in India) reversed (indicated by “from the east” – this being an across clue), like so: LAHD-I-DAH.

24. Whence porcelain fruit without error at the back (7)

Answer: LIMOGES (i.e. “whence porcelain”, specifically a city in France renowned for its porcelain, it says here. (Shrugs)). Solution is LIMES (i.e. “fruit”) wrapped around or placed “without” OG (i.e. “error at the back”, specifically an Own Goal), like so: LIM(OG)ES. Chalk one to my Bradfords here.

Answer: INTRUDER (i.e. “unwelcome fellow”). Solution is INTO (i.e. “keen on”) with the last letter removed (indicated by “almost”) and the remainder followed by RUDER (i.e. “less civil”), like so: INT-RUDER.

Answer: SATNAV (i.e. “guide”, specifically a contraction of Satellite Navigation). Solution is SAT (i.e. “rested”) followed by VAN (i.e. “vehicle”) after it has been “reversed”, like so: SAT-NAV.

Answer: YELLOW FEVER (i.e. “complaint”). Solution is F (i.e. “loudly”, specifically a recognised abbreviation of “forte” in musical lingo) placed between or “cutting” YELLOW (i.e. “chicken”) and EVER (i.e. “always”), like so: YELLOW-(F)-EVER.

Answer: HORSE PISTOL (i.e. “one maybe fired”, specifically a large pistol formerly carried by horsemen). Solution is PI (i.e. “detective”, specifically a Private Investigator) placed “on” or after HORSE (i.e. “drug”, specifically a street name for heroin) and followed by LOTS (i.e. “many”) once reversed (indicated by “rejected”), like so: HORSE-PI-STOL.

Answer: DRAWING ROOM (i.e. “entertaining place”, as in a place to entertain guests). Solution is DRAW IN (i.e. “to involve”) followed by GROOM (i.e. “partner in match” or wedding).

Answer: PRESENT PARTICIPLE (i.e. “e.g. coming here” – in the dry and joyless world of grammar, a participle is “a non-finite form of a verb used to form compound tenses (eg broken in the phrase had broken) and as an adjective (eg burning in the phrase the burning bush)”, while a present participle is one “referring roughly to contemporaneous action” (both Chambers). Solution is PRESENT (i.e. “here”) followed by I (a recognised abbreviation of an electrical “current” used in physics) and P (ditto “power”) once they have been placed in or “splitting” PARTICLE (i.e. “atom”), like so: PRESENT-PARTIC(IP)LE.

Answer: STAIR (i.e. “one in flight” of stairs). “So we hear” indicates homophone. Solution is a homophone of STARE (i.e. “look”).

Answer: ETHERISED (i.e. “put under”). Solution is an anagram (indicated by “rocks”) of THE followed by DESIRE (i.e. “wish”) reversed (indicated by “to return”), like so: ETH-ERISED.

Answer: BOUNTIFULLY (i.e. “lavishly”). Solution is BULLY (i.e. to “cow” someone, as in causing them to cower) wrapped around or “eating” an anagram (indicated by “bananas”) of UNIT OF, like so: B(OUNTIF)ULLY.

4. Clad in vinyl, a monarch’s turned up something odd (7)

Answer: KINGDOM (i.e. “animals, say” – other kingdoms are available). “It’s involved in” indicates the solution has been hidden in the clue, like so: STOC(KING DOM)ESTIC.

Answer: ASTRAY (i.e. “off track”). When written as AS TRAY, the solution also satisfies “like cup-bearer”.

20. What brightens up endlessly bad mess (9)

Answer: LAMPLIGHT (i.e. “what brightens up”). Solution is LAME (i.e. “bad”) with the last letter removed (indicated by “endlessly”) and the remainder followed by PLIGHT (i.e. “mess”), like so: LAM-PLIGHT.

26. Dishonestly persuade, given lie to spread around (8)

Answer: INVEIGLE (i.e. “dishonestly persuade”). “To spread around” indicates anagram. Solution is an anagram of GIVEN LIE.

Answer: NETWORKED (i.e. “made contacts”). When written as NET WORKED, the solution also satisfies “was possible to go online”.

Answer: OYSTERCATCHER (i.e. “bird”). “Being wild” indicates anagram. Solution is an anagram of CRY COAST THERE.

33. Figures on board covering obstruction around shelf (11)

Answer: MANTELPIECE (i.e. “shelf”). Solution is MAN and PIECE (i.e. “figures on [chess] board” – chess pieces are sometimes referred to as “men”) wrapped around or “covering” LET (i.e. “obstruction” – an archaic meaning of the word) reversed (indicated by “around”), like so: MAN-(TEL)-PIECE.

36. Merely running with no end, he hopes to generate interest (11)

Answer: MONEYLENDER (i.e. “he hopes to generate interest”). Solution is an anagram (indicated by “running”) of MERELY and NO END.

40. Chap treated by yours truly given digital upgrade (9)

41. Rates contributor in Times during year apt to change (8)

Answer: TAXPAYER (i.e. “rates contributor”). Solution is X (i.e. “times”, as in the multiplication symbol – ignore the misleading capitalisation) placed “during” an anagram (indicated by “to change”) of YEAR APT, like so: TA(X)PAYER.

43. Stage character to go off behind platform (7)

Answer: CENSUS (i.e. a “count” held every ten years). Solution is CONSENSUS (i.e. “agreement”) with ON and S (a recognised abbreviation of “son”) removed or “abandoned”, like so: C(ON-S)ENSUS => CENSUS.

Answer: POSIT (i.e. “place”). Solution is PROSIT (i.e. “good health”, as in a toast like “cheers” or “salut” – not one I recall coming across before), with the R removed (indicated by “leaving queen” – R being a recognised abbreviation of Regina, or “queen” in Latin). Chalk one to my Bradfords here.