A decent puzzle this week, and one with a religious mini-theme if the scorch marks on my keyboard are anything to go by. One that doesn’t feature any reversal wordplay too, which you don’t often see. You can find my completed grid below along with explanations of my clues where I have them. I hope you find them useful.

As ever, some housekeeping before all that: I gots ya some mouldy old book reviews here, a story of mine there, and a whole bunch of previous solutions over thisaway. Go check ’em out. Or not. Your choice.

Till next time, stay safe and enjoy the sun. 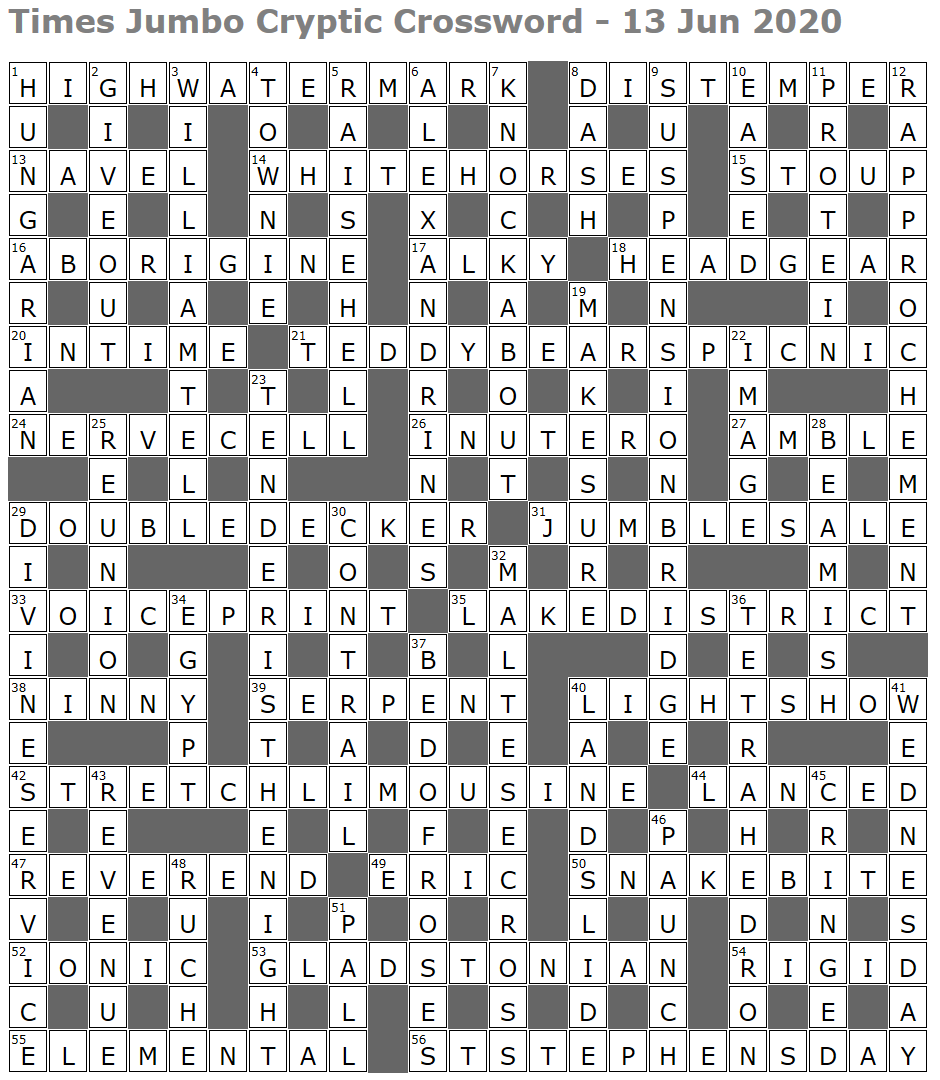 Answer: HIGH-WATER MARK (i.e. “that indicates maximum coverage” – referring to the marks you sometimes see on bridges and such showing the highest level the water has reached). Solution is HIGH (i.e. “proud”) followed by WATERMARK (i.e. “feature in paper”). For an awkward moment early on in the puzzle, I thought this going to be PAGE-THREE GIRL. Thankfully less smutty minds prevailed.

Answer: DISTEMPER. Solution satisfies a kind of “paint” and “sickener for animal”.

Answer: WHITE HORSES. Solution satisfies “waves” – think a certain Guinness advert from a while back –and, I suppose, “that are called grey”. Are they though? Chambers has a definition of “grey” as “a grey or greyish animal, esp a horse”. Doesn’t necessarily scream white to me. Perhaps it’s a horse racing term. (Shrugs. Gets on with life.)

Answer: STOUP (a vessel or “basin” for holy water). Solution is STOP UP (i.e. “to block”) with the first P removed (indicated by “powerless” – P being a recognised abbreviation of “power”).

Answer: ALKY, a slang word for an alcoholic (i.e. “down-and-out perhaps”). “Protected by” indicates the solution is hidden in the clue, like so: V(ALKY)RIES.

Answer: DOUBLE-DECKER (i.e. “bus”). Solution is DOUBLED (i.e. “turned sharply”, as in a double-take) followed by an anagram (indicated by “flowing”) of CREEK, like so: DOUBLED-ECKER.

Answer: JUMBLE SALE (i.e. “fund raiser”). Solution is JUMBLIES (i.e. “[Edward] Lear’s folk” referring to his children’s poem The Jumblies) with the I removed (indicated by “giving away [Roman numeral] one”) and followed by ALE (i.e. “beer”), like so: JUMBLES-ALE.

Answer: VOICEPRINT (i.e. “recorded speech”). Solution is VOICE (i.e. “active, for one” – a quick demonstration of active vs passive voice: active voice – “Sam kicked the ball”; passive voice “the ball was kicked by Sam”. Active voice is generally a nifty way of injecting a little bit of life into a piece of writing) followed by PRINT (i.e. “to make hard copy”).

Answer: LAKE DISTRICT. “Off” indicates anagram. Solution is an anagram of TRAILS TICKED. Within the context of the clue, you may well tick off a list of trails while trotting about the Lake District. Another nicely worked anagram.

38. Figure having third name for film is silly (5)

Answer: SERPENT (i.e. “creeper”). “It was tempting to have in the garden” refers to the Bible story of Eve, who succumbed to temptation in the Garden of Eden, nibbling on an apple despite the large “DO NOTTE EATETH THE APPLES” signs that were dotted everywhere, because a snake said so. Which obviously happened.

Answer: LIGHT SHOW (i.e. “light show”). “To disperse” indicates anagram. Solution is an anagram of THIS GLOW and H (a recognised abbreviation of “hard” used in grading pencils).

Answer: LANCED (i.e. “cut open”). Solution is GLANCED (i.e. “took a quick look”) with the G removed (indicated by “not good” – G being a recognised abbreviation of “good”).

Answer: IONIC (i.e. “order” – Chambers has this: “relating to the Ionians, one of the main divisions of the Ancient Greeks, to their dialect, or to Ionia”, and “relating to an order of Greek architecture characterised by the volute of its capital”. So it’s probably something to do with that, then.) Solution is IRONIC (i.e. “mildly humorous”) with the R removed (indicated by “right to leave” – R being a recognised abbreviation of “right”).

Answer: GLADSTONIAN (i.e. “like grand old man” – William Gladstone was referred to as such by his supporters). “Prepared” indicates anagram. Solution is an anagram of IN GOAL STAND.

54. Not initially unresponsive, but stiff (5)

Answer: ELEMENTAL (i.e. “basic”). When written as ELEMENT AL the solution satisfies “way to describe aluminium” – Al being the chemical symbol of aluminium. Nicely worked. Best clue of the puzzle.

Answer: ST STEPHENS DAY (i.e. “it won’t arrive until after Christmas”, specifically 26th December, or Boxing Day). “To cook” indicates anagram. Solution is an anagram of SENDS THE PASTY. Speaking of the C-word, the Times Jumbo Cryptic Crossword will celebrate its 50th birthday this Christmas. We’ve got to be due something special for it, right? Some years ago, when it was still a broadsheet, my local paper The Northern Echo used to publish a whacking great 73×73 crossword on Christmas Eve. It was a superb time-filler between Bond films during Christmas and New Year. I mean, just look at it. No pressure, setters!

Answer: HUNGARIAN (i.e. “foreigner”, unless you are reading this in Hungary. (Waves in Hungarian)). Solution is HUNG (i.e. “depended on”) followed by ARIA (i.e. “contribution to opera” – ignore the misleading capitalisation) and N (a recognised abbreviation of “north”).

6. Digital assistant at first nearly forgets what to say – fed with new lines (12)

Answer: ALEXANDRINES (i.e. “lines” – once more unto the Chambers, my friends: “a verse of six iambs (English), or in French of twelve and thirteen syllables in alternate couplets (perhaps from a poem on Alexander the Great by Alexandre Paris)”. So there you go.) Solution is ALEXA (i.e. Amazon’s “digital assistant”) followed by N (i.e. “at first nearly”, i.e. the first letter of “nearly”) then DRIES (i.e. “forgets what to say”) once this latter has been wrapped around or “fed with” N (a recognised abbreviation of “new”), like so: ALEXA-N-DRI(N)ES.

Answer: SUSPENSION BRIDGE (i.e. “held up crossing”). Solution is an anagram (indicated by “stupidly”) of IGNORED BUSINESS and P (a recognised abbreviation of “pressure”).

Answer: RAPPROCHEMENT (i.e. “boosting relations”). Solution is RAP (i.e. “criticise”) followed by PRO (i.e. “tart”, taken as a recognised abbreviation of prostitute) and H once it has been placed in or “entering” CEMENT (i.e. “bond”) like so: RAP-PRO-C(H)EMENT.

Answer: MAKE SURE (i.e. “put beyond doubt”). “What one can do when user moves” plays on how “user” is an anagram of “sure”, i.e. you can MAKE SURE from its letters.

22. Picture that is the cover of periodical (5)

Answer: TENDER IS THE NIGHT (i.e. “[F.] Scott [Fitzgerald]’s work”). Solution is TENDER (i.e. “work as nurse”) followed by I and SIGHT (i.e. “glimpse”) once the latter has been wrapped around or “covering” THEN (i.e. “on one occasion”), like so: TENDER-I-S(THEN)IGHT. Solution also featured in puzzle 1426 earlier this year. I had no idea there were so few classic books in the world.

Answer: REUNION (i.e. “French department”, i.e. the French for “department” – a guess, really, not speaking the language much outside of please and thank you. Google Translate kind of backs it up, ish or thereabouts. I could easily be wide of the mark though.) Solution is RE (i.e. “concerning” – think email replies) followed by UNION (i.e. “organisation of labour”).
[EDIT: A big thank you to Steve in the comments for clearing this one up tout de suite! The clue refers to a small island near Madagascar called Réunion, which is an overseas “department” and region of France. Cheers, Steve! – LP]

Answer: BEAMISH (i.e. “radiant”). Solution is BE (i.e. “to live”) followed by AMISH (i.e. “strict sect”). Also a pretty cool museum up north, if you remember such things.

Answer: DIVINE SERVICE (i.e. “which minister takes charge of” – not something listed in Chambers but my Oxford backs it up). Solution is DIVINES (i.e. “foresees”) followed by ER (i.e. “royal”, specifically Elizabeth Regina, the Queen) and VICE (i.e. “weakness”).

Answer: CONTRAIL (i.e. “skyline”, i.e. the trails in the sky left behind by jet planes). Solution is an anagram (indicated by “travelling”) of TRAIN placed in or “through” COL (i.e. “high [mountain] pass”), like so: CO(NTRAI)L.

Answer: TETRAHEDRON (i.e. “pyramid”). Solution is TED and RON (i.e. “two men”) wrapped around or “collecting” an anagram (indicated by “reshaped”) of EARTH, like so: T(ETRAH)ED-RON.

Answer: BED OF ROSES (i.e. “comfortable situation”). Clue riffs on how thorns on rose bushes see them “grow prickly”. You get the idea.

Answer: LANDSLIDE (i.e. “mortal danger”). Solution is LAND (i.e. “country”) followed by an anagram (indicated by “astray”) of IS LED, like so: LAND-SLIDE.

41. One in seven needs to change driver, avoiding water flowing in road (9)

Answer: RUCHE (i.e. “frill”). Solution is RU (i.e. “sport”, specifically Rugby Union) followed by CHE Guevara (i.e. “red” or communist). Chalk one to my Bradford’s here, as I couldn’t look past ruff, even though it didn’t have enough letters.