A toughie for Bank Holiday Monday, as feared! Though this wasn’t quite on a par with recent puzzles, I do appreciate toughies that have me dug deep into the pages of a dictionary, which is what we had today. Some of the clueing was a bit wayward (and expect red bits, regulars), but I’d still say this was a good ‘un overall.

You can find my completed grid below – though note that I’m not sure about 8d – along with explanations of my solutions where I have them. I hope you find them helpful.

As ever, some housekeeping. A few book reviews can be found mouldering here, along with a story I did a while ago. Meanwhile, if you’ve been buggered by a recent Jumbo, so to speak, you can find solutions to the past ninety-odd of them on my Just For Fun page.

Finally, if you subscribe to these posts it might be worth checking in a little later in case a helpful commenter sheds light on my… er… red bits. I don’t believe WordPress pings out updates to my posts.

Right, that’s all for now. Stay safe, keep well and I’ll see you around. 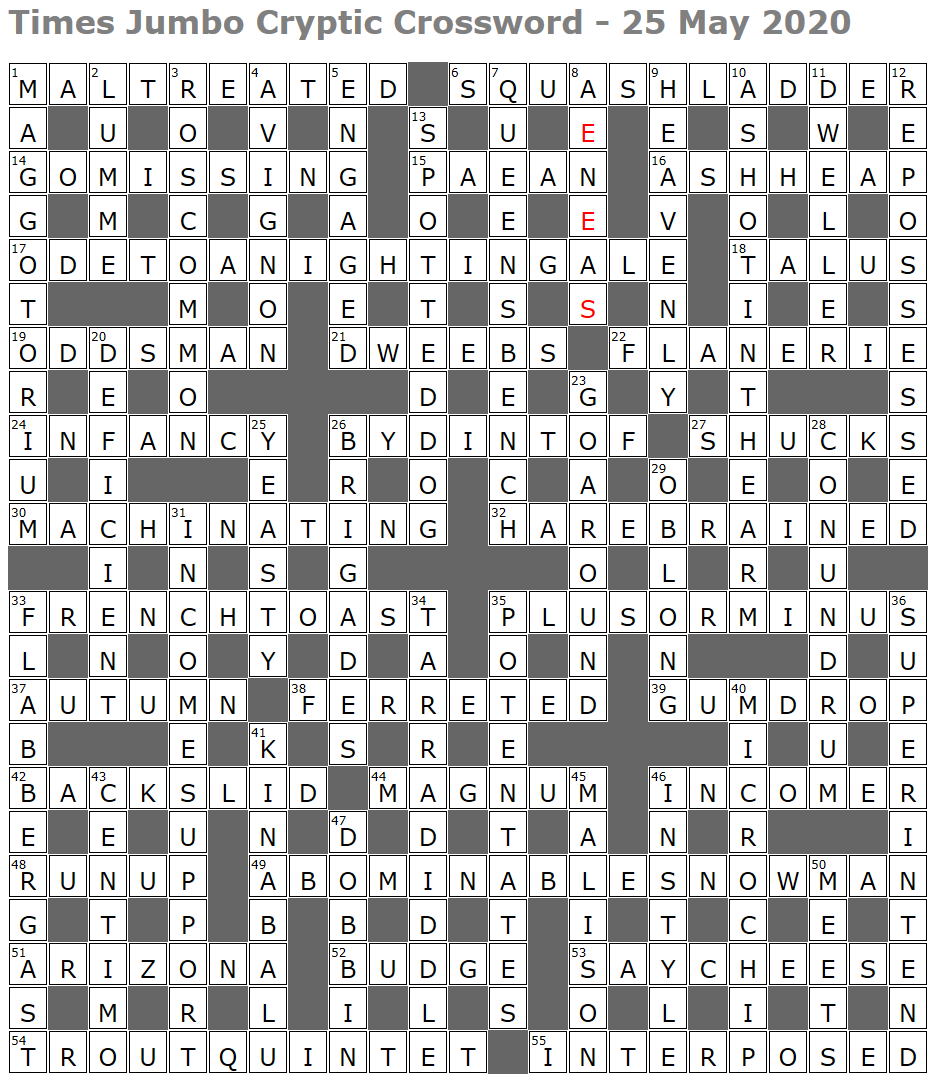 Answer: ODE TO A NIGHTINGALE (i.e. “giving John [Keats]’s address to singer” – a singer this case being a songbird). “Rogue” indicates anagram. Solution is an anagram of THE DOGGONE ITALIAN.

18. Fragments of rock of crystal, usually after erosion (5)

Answer: TALUS (i.e. “fragments of rock”). “After erosion” indicates the solution has been hidden in the clue, like so: CRYS(TAL US)ALLY.

Answer: ODDSMAN. Solution satisfies “Scottish umpire” and, cryptically, “bookmaker” – playing on how “odds” are often used in betting. A nod to my Bradfords here.

21. We’d have girls coming out without anoraks, across pond? (6)

Answer: DWEEBS (i.e. “anoraks, across pond”, referring to how geeks are referred over in the US). Solution is WE with DEBS (i.e. “girls coming out”, i.e. a recognised abbreviation of “debutantes”) placed “without” it, like so: D(WE)EBS.

Answer: FLANERIE (i.e. “sloth”). Solution is ERIE (one of the Great “Lakes”) placed after or “by” FLANK (i.e. “side”) once the last letter has been removed (indicated by “briefly”), like so: FLAN-ERIE. I needed my Oxford to nail this one, as my Chambers and Collins Concise didn’t want to know.

Answer: BY DINT OF (i.e. “through”). “Desperate” indicates anagram. Solution is an anagram of FIND TOBY.

44. Large amount of red or white antelope marks on the mother (6)

Answer: RUN-UP. Solution satisfies “quickly make” and “approach”. It satisfies the clue taken as a whole too.

49. Something legendary in range of pants: singular, fashionable – lots reduced (10,7)

Answer: ABOMINABLE SNOWMAN (i.e. “something legendary in [mountain] range”). Solution is ABOMINABLE (i.e. “pants”, both taken to mean something a bit rubbish) followed by S (a recognised abbreviation of “singular”), then NOW (i.e. “fashionable”) and MANY (i.e. “lots”) once its last letter has been removed (indicated by “reduced”), like so: ABOMINABLE-S-NOW-MAN.

Answer: SAY CHEESE (i.e. “request from cameraman”). Solution is SAY (i.e. “for one”, as in “for example”), while CHEESE seems to relate to the phrase “cheese it”, supposedly said by someone wanting another to stop or “desist” doing something. Too loose for my liking.

54. A major piece some catch still when acquiring books (5,7)

Answer: TROUT QUINTET, “a major piece” by Franz Schubert. Solution is TROUT (i.e. “some catch” of fish) followed by QUIET (i.e. “still”) once it has been wrapped around or “acquiring” NT (i.e. “books”, specifically the New Testament of The Bible), like so: TROUT-QUI(NT)ET. My knowledge of classical music isn’t exactly comprehensive, so this was gotten solely through the wordplay.

55. Mediated, having done originally with priest (10)

Answer: INTERPOSED (i.e. “mediated”). Blimey, this was a late one! I was about to click on the big blue ‘Publish’ button when the clue finally clicked. The solution is an anagram (indicated by “originally”) of DONE and PRIEST. Sometimes you just don’t see ’em. Which, coincidentally, was the reason I gave when I failed my driving test, m’lud.

1. In place of gentle breeding, sporting too grim a mug (11)

Answer: MAGGOTORIUM (i.e. “place of gentle breeding” – one meaning of “gentle” is a soft maggot used as bait in fishing. I mean, you could just call them maggots, I dunno…) “Sporting” indicates anagram. Solution is an anagram of TOO GRIM A MUG.

3. Irish town’s trio regularly the last to rise in parliament (9)

Answer: ROSCOMMON (i.e. “Irish town”). Solution is RO (i.e. “trio regularly”, i.e. every other letter of TRIO) followed by COMMONS (i.e. “parliament”) once the S has been promoted to the beginning (indicated by “the last to rise in…”), like so: RO-SCOMMON. One gotten mostly from the wordplay.

Answer: ENGAGED (i.e. “took part”). Solution is ENG (i.e. “our tongue, in short”, i.e. a recognised abbreviation of “English”) followed by AGED (i.e. “well past its sell-by-date”). Setters words, folks, not mine!

Answer: QUEENS BENCH (i.e. “division of court”). Solution is an anagram (indicated by “new”) of SEEN followed by B (i.e. “barrister initially”), around which is wrapped or “cased” with QUENCH (i.e. “put out”), like so: QU(EENS-B)ENCH.

8. War refugee late in because having to keep disappearing (6)

Answer: AENEAS. I’m not 100% sure here as I haven’t got much of a fix on the parsing, but this, or perhaps AENEAD, seems the best fit, especially considering how often Times setters nurse semis for the classics. Aeneas, in Virgil’s The Aeneid, was a survivor of the Trojan War, after which both he and a bunch of his followers, the so-called Aeneads, legged it to Italy. So, “war refugee”. Of AENEAS and AENEAD, I’ve gone for the former purely due to “because having to keep”, which I’m assuming means wrapping AS around the midsection, like so: A(ENEA)S. But that’s all I’ve got for now, and I’m happy to be corrected.
[EDIT: Huge thanks for Mark in the comments for acing this one, pointing out that “to keep disappearing” suggests the removal of every other letter of LATE IN BECAUSE. That’s some top solving there! – LP]

9. Perfect pitch simply with nothing lacking! (8)

Answer: HEAVENLY (i.e. “perfect”). Solution is HEAVE (i.e. “pitch”) followed by ONLY (i.e. “simply”) with the O removed (indicated by “with nothing lacking”), like so: HEAVE-NLY.

Answer: A SHOT IN THE ARM (i.e. “something invigorating”). “Running” indicates anagram. Solution is an anagram of THE MARATHON IS.

Answer: DWELLER (i.e. “liver”, as in one who lives… somewhere). Solution is D (i.e. “finally pronounced”, i.e. the last letter of “pronounced”) followed by WELLER (i.e. “healthier? That’s wrong!” – a riddly riff on how one cannot be “weller” as it’s not a proper word. Yeah, I think it stinks as well.)

Answer: SPOTTED DOG, another name for spotted dick, a dessert or “afters”. Solution is SPOTTED (i.e. “saw”) followed by DOG (i.e. to worry or “trouble”).

Answer: DEFICIENT (i.e. “wanting”). “To misbehave” indicates anagram. Solution is an anagram of IF ENTICED.

23. The regular activities in an Indian state, perhaps, are enough (2,6)

Answer: GO AROUND (i.e. “are enough”, as in having enough to go around). When read as GOA ROUND the solution also satisfies “the regular activities in an Indian state”.

28. Something fishy about sister with unusual problem (9)

Answer: FLABBERGAST (i.e. to astound or “floor” someone). Solution is FLAB (i.e. “fat”) followed by BEAST (i.e. “creature”) once it has been wrapped around or “holding” the “first two” letters of “ground” after they’ve been reversed (indicated by “up” – this being a down clue), like so: FLAB-BE(RG)AST.

Answer: TARRADIDDILE (i.e. “stuff”, as in stuff and nonsense). Solution is TAR (i.e. a word for “sailor” often used by setters) followed by RA (i.e. “artist”, specifically a Royal Academician) and DIDDLE (i.e. to con or “do” someone).

Answer: KINABALU (i.e. “mountain”). Solution is KIN (i.e. “family”) and U (a recognised abbreviation of “united”) both wrapped around or “gathering” A and LAB (i.e. “party”, specifically a recognised abbreviation of the Labour Party) once the latter has been reversed (indicated by “to climb” – this being a down clue), like so: KIN-(A-BAL)-U. I had most of the components to this one but needed my Bradford’s to help stitch them together.

Answer: CENTIMO (i.e. a “bit” or coin used in a number of Latin American countries). Solution is a homophone (indicated by “from the mouth”) of SCENT followed by IMO (i.e. “if you ask me”, i.e. a recognised abbreviation of “in my opinion” often used online), like so: CENT-IMO.

Answer: MALISON (i.e. “curse of old”, being a poetic word I guess from ye olde times). Solution is L (a recognised abbreviation of “Liberal”) placed in MAISON (French for “house”, and so “domiciled in France”), like so: MA(L)ISON. A new one on me. I like it.

Answer: IN STYLE (i.e. “impressively”). “Laid out” indicates anagram. Solution is an anagram of ISN’T ELY.