A toughie this week. Either that or this is a setter I’m not immediately in tune with, which happens. I think I got there in the end. You can find my completed solution below along with explanations of my answers where I have them. I hope you find them helpful.

Some housekeeping before we begin. If you’ve got a recent Times Jumbo Cryptic that’s showing a gap or two then my Just For Fun page could be just the thing. I’ve also got book reviews and a free story leavening all the crossword stuff. Not much reading is getting done at the moment, sadly, as the day job has gone nuts. It’s nothing compared to the challenges faced by our incredible NHS workers, delivery drivers and everyone else keeping the country ticking over during the plague, and for whom we should all be thankful – panic-buyers especially. Still a bugger, though. To help keep me sane, I put together a Spotify playlist that’s seen some heavy clog this last week. If you’d like a gander through the music that has accompanied the production of this blog post, or if you like your music generally on the loud side, then check it out thisaway: https://open.spotify.com/playlist/4CElDK4KESn0rh7oIhWMAF?si=RK4zKznCSrO45i03HJ0i3w

Anyway, on with the show. Stay well, peeps. 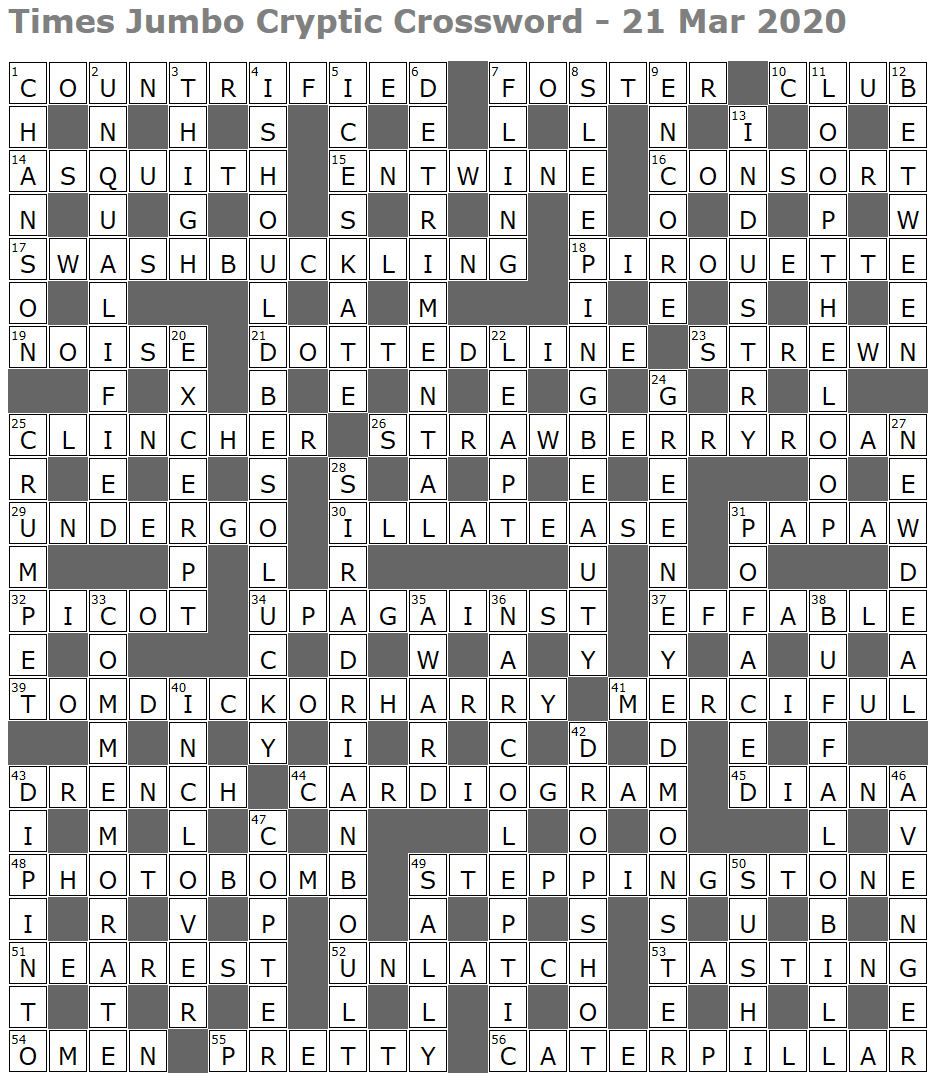 1. Rustic made a difference saving one tree, looking back (11)

Answer: FOSTER. Solution satisfies “care for” and “doctor taking unexpected dip”, referring to the old rhyme “Doctor Foster went to Gloucester in a shower of rain; he stepped in a puddle right up to his middle and never went there again”.

Answer: CLUB. Solution satisfies “stick” and “one in a suit” of playing cards.

Answer: Herbert Henry ASQUITH, Liberal politician who served as UK Prime Minister from 1908 to 1916 (i.e. “top Liberal”). Solution is an anagram (indicated by “resolved”) of HAS which is wrapped around or “bearing” QUIT (i.e. “left”), like so: AS(QUIT)H.

Answer: ENTWINE (i.e. “connect”). Solution is E (a recognised abbreviation of “English”) followed by NT (i.e. “books”, specifically the New Testament of The Bible) and WINE (i.e. “red or white”).

Answer: CONSORT (i.e. “companion”). Solution is C (a recognised abbreviation of “companion”, such as a Companion of Honour which is sometimes abbreviated to CH). This is followed by SORT (i.e. “character”) once ON has been placed “on the right” of it, like so: C-ON-SORT.

Answer: PIROUETTE (i.e. “Billy Elliot might do it”, referring to the hit film about a schoolboy who takes up ballet dancing). Solution is PI (i.e. “good”, being a recognised abbreviation of “pious” that we haven’t seen for a while) followed by ROUTE (i.e. “way”) once it has been wrapped around or “screening” ET (i.e. “film”, specifically ET: The Extra-Terrestrial), like so: PI-ROU(ET)TE.

Answer: NOISE (i.e. “sound”). Solution is NOSE (i.e. “hooter”) wrapped around or “squeezing” I (i.e. “[Roman numeral] one”), like so: NO(I)SE. For some reason this took me bloody ages to twig. Sometimes you just don’t see them.

Answer: DOTTED LINE. Solution satisfies “sign here” and “i”, referring to how the character is formed by a vertical line dotted at the top. A relatively quick get, but I rather liked this one.

Answer: CLINCHER (i.e. “certain winner”). Solution is R (a recognised abbreviation of “right”) placed “after” N (i.e. “neat header”, i.e. the first letter of “neat”) once it has been placed “in” CLICHÉ (i.e. “’game of two halves’, say” – other clichés are available), like so: CLI(N)CHE-R. As examples of misdirection go, this clue was a bit of a sod!

Answer: STRAWBERRY ROAN (i.e. breed of “horse”). Solution is STRAWBERRY (i.e. “fruit”) and ROWAN (i.e. “tree”) once the “second” W (a recognised abbreviation of “wife”) has been “knocked” out. One of those “I think it begins with ‘strawberry’ so let’s see what Chambers says” moments, if I’m honest.

Answer: ILL AT EASE (i.e. “uncomfortable”). Solution is VILLA (i.e. “house”) with its initial letter removed (indicated by “concealing face”) and followed by TEASE (i.e. “flirt”), like so: ILLA-TEASE.

31. One going after Oscar with something fruity (5)

Answer: PAPAW (i.e. “fruity”). Solution is PAPA (i.e. “one going after Oscar” in the phonetic alphabet, “Oscar” being O, “Papa” being P) followed by W (a recognised abbreviation of “with”).

32. Piece of embroidery – officer breaking mine (5)

Answer: UP AGAINST (i.e. “dealing with”). Solution is PAT (i.e. “very minor blow”) wrapped around or “holding” GAINS (i.e. “profits”). The whole is then placed after or “by” U (a recognised abbreviation of “university”), like so: U-PA(GAINS)T.

Answer: EFFABLE (i.e. “expressible in words”; “once” refers to how this is an archaic word). Solution is E (i.e. “ultimately expressive”, i.e. the last letter of “impressive”) followed by F (a recognised abbreviation of “fine”, used in pencil grading) and FABLE (i.e. “story”).

Answer: MERCIFUL (i.e. “compassionate”). Solution is M (a recognised abbreviation of “male”) followed by an anagram (indicated by “diabolical” – a nice touch there, setter) of LUCIFER, like so: M-ERCIFUL.

43. Pour water over some children, childishly (6)

Answer: DRENCH (i.e. “pour water over”). “Some” indicates the solution has been hidden in the clue, like so: CHIL(DREN CH)ILDISHLY.

Answer: CARDIOGRAM (i.e. “line observed in [operating] theatre”). Solution is an anagram (indicated by “recreated”) of DRAMA IGOR placed “after” C (“Charlie” in the phonetic alphabet), like so: C-ARDIOGRAM.

Answer: DIANA (i.e. “Artemis in Rome” – over to Chambers for this one: “Artemis: the Greek virgin goddess of the moon, identified by the Romans with Diana”). Solution is INDIANA (i.e. “[US] state”) with the IN removed (indicated by “in having [been] abandoned”).

48. Something taken with a lot of money to sabotage another’s image (9)

Answer: PHOTOBOMB (i.e. “to sabotage another’s image”, often a selfie). Solution is PHOTO (i.e. “something taken”) followed by BOMB (i.e. “a lot of money”, as in something costing a bomb).

Answer: STEPPING STONE. Solution satisfies “point of procedure” and “on which to put one’s foot down”. Also (nearly) a tremendous piece of 1970s jazz funk by Johnny Harris that you will almost certainly have heard before without perhaps knowing what it was. Here’s a YouTube link for you to strut your funky stuff: https://youtu.be/iyR6rzx6XJY

Answer: UNLATCH (i.e. “open”). Solution is LATE with the last letter removed (indicated by “not closing”) and CH (a recognised abbreviation of “church”) both placed “after” UN (i.e. “one in Paris”, i.e. the French for “one”), like so: UN-LAT-CH.

Answer: OMEN (i.e. “sign”). “All kicking off” indicates the solution is derived from the initial letters of OF MY EVIL NATURE.

1. Number of the French holidaymakers originally aboard vessel, relative (7)

Answer: UNQUALIFIED. Solution satisfies “complete”, as in an unqualified success, and “amateur, possibly”.

Answer: THIGH (i.e. “bit of a chicken”). Solution is T (a recognised abbreviation of “time”) followed by HIGH (i.e. “off”, referring to food that’s gone off).

Answer: I SHOULD BE SO LUCKY, a “pop success” from Stock Aitken and Waterman. (Checks notes.) Oh, and Kylie Minogue too. Solution also satisfies the sarcastically put “really?”

Answer: ICE SKATE. Solution is an anagram (indicated by “fitting”) of C (i.e. “Cinderella originally”, i.e. the first letter of Cinderella), EEK and IT’S A. “Lost slipper” refers, I guess, to the glass slipper Cinderella loses in the fairy story. I’m wondering if it’s also referring to skate fish, which usually swim in warm waters, so an ICE SKATE could be said to be lost. I can’t readily find a reference linking skates to slippers, so I could be overthinking it.
[EDIT: Thanks to Andrew in the comments for offering a clearer explanation. “Lost” can also be an anagram indicator, which would then make “slipper” an ice skate, in that an ice skate lets you slip and slide about an ice rink. “Fitting” indicates the C of Cinderella is slotted into the anagram of EEK IT’S A, like so: I(C)ESKATE. Thanks, Andrew! – LP]

Answer: SLEEPING BEAUTY (i.e. “dish stirred” – in the fairy story, Sleeping Beauty is brought from her eternal slumber, or “stirred”, by Prince Charming; “dish” in this instance is another word for “beauty”). I haven’t twigged the “spooner” bit. Sleeping Beauty doesn’t strike me as a title that lends itself to a Spoonerism, so there’s likely some other reference I’m missing. If I have a brainwave or some kind commenter swings by with the lowdown, I’ll update the post.
[EDIT: Thanks again to Andrew in the comments for his insight on this one. “Spooner” could be descriptive of Prince Charming, i.e. one born with a silver “spoon” in his mouth. (Tips hat Andrewards.) – LP]

11. Game to go up, the ladies possibly beginning to perform aerobatic stunt (4,3,4)

Answer: LOOP THE LOOP (i.e. “aerobatic stunt”). Solution is POOL (i.e. “game”) reversed (indicated by “to go up”, this being a down clue) followed by THE LOO (i.e. “the ladies possibly” – other flavours of toilet are available) and P (i.e. “beginning to perform”, i.e. the first letter of “perform”), like so: LOOP-THE-LOO-P.

Answer: EXCERPT (i.e. “a bit”). Solution is C (a recognised abbreviation of “cold”) placed in the “River” EXE and followed by the initial letters (indicated by “at first”) of RATHER PARKY TODAY, like so: EX(C)E-R-P-T.

Answer: GREEN-EYED MONSTER (i.e. “envy”). Solution is Graham GREENE (i.e. “author”) followed by an anagram (indicated by “novel”) of SOME TRENDY, like so: GREENE-YEDMONSTER.

Answer: NEW DEAL (i.e. “Roosevelt’s baby”, referring to the US president’s big policies and reforms of the 1930s). “Reportedly” indicates homophone. When heard as NUDE EEL the solution also satisfies “swimmer without trunks”.

Answer: SIR ADRIAN BOULT (i.e. “conductor” – a fair trawl of Wikipedia was undertaken for this one once the wordplay and sufficient intersecting letters became clear, given the guy died when I was (uses fingers: one, two, three, three and a half)… I was young, anyway). Solution is D (i.e. “[Roman numerals] five hundred”) placed or “crammed in” an anagram (indicated by “terribly”) of IRRATIONAL BUS, like so: SIRA(D)RIANBOULT.

Answer: PO-FACED (i.e. “serious”). Given that the “River” PO flows through “Turin”, the solution also satisfies “looking to cross [or FACING] river in Turin”.

Answer: NARCOLEPTIC (i.e. “likely to drop off” to sleep). Solution is an anagram (indicated by “unstable”) of PARTICLE ON placed ahead of or “on” (this being a down clue) C (i.e. “top of cliff”, i.e. the first letter of “cliff”), like so: NARCOLEPTI-C. A nice bit of recursion, there.

Answer: IN CLOVER (i.e. “doing well”). Solution is FINCH (i.e. “bird”) with the first and last letters removed (indicated by “after wings clipped”) and followed by LOVER (i.e. “mate”), like so: INC-LOVER.

Answer: AVENGER (i.e. “person seeking retribution”). “In” indicates the solution is hidden in the clue, like so: NEWH(AVEN, GER)MANIC.

Answer: COPTER (i.e. “chopper”, both informal words for a helicopter). Solution is COPER (i.e. “one managing”) wrapped around or “collecting” T (i.e. “tartar, primarily”, i.e. the first letter of “tartar”), like so: COP(T)ER.

Answer: SUSHI (i.e. “Japanese food”). Solution is SUSIE (i.e. “girl”) with the last letter removed (indicated by “short”) and the remainder wrapped around or “eating” H (a recognised abbreviation of “hot”), like so: SUS(H)I.