Another good ‘un marks the end of a busy period of Jumbos. I much prefer puzzles that have me thumbing through a good dictionary as opposed to an atlas or a Who’s Who of dead people, so for the most part this one ticked several boxes. You can find my completed grid below along with explanations of my solutions where I have them. I hope you find them helpful.

A spot of housekeeping before we crack on. If you have a recent Times Jumbo Cryptic that’s left you cold then you might find some joy in my Just For Fun page. Meanwhile, if book reviews tickle your fancy then I’ve got a bunch here. I’ll stick a review of Best New Horror 12 on here shortly(ish), now things are settling down again after New Year. If you’d like a short story then I’ve got you covered too.

If you’re here just for the answers then I guess I’d better hop to it. Tuck in! 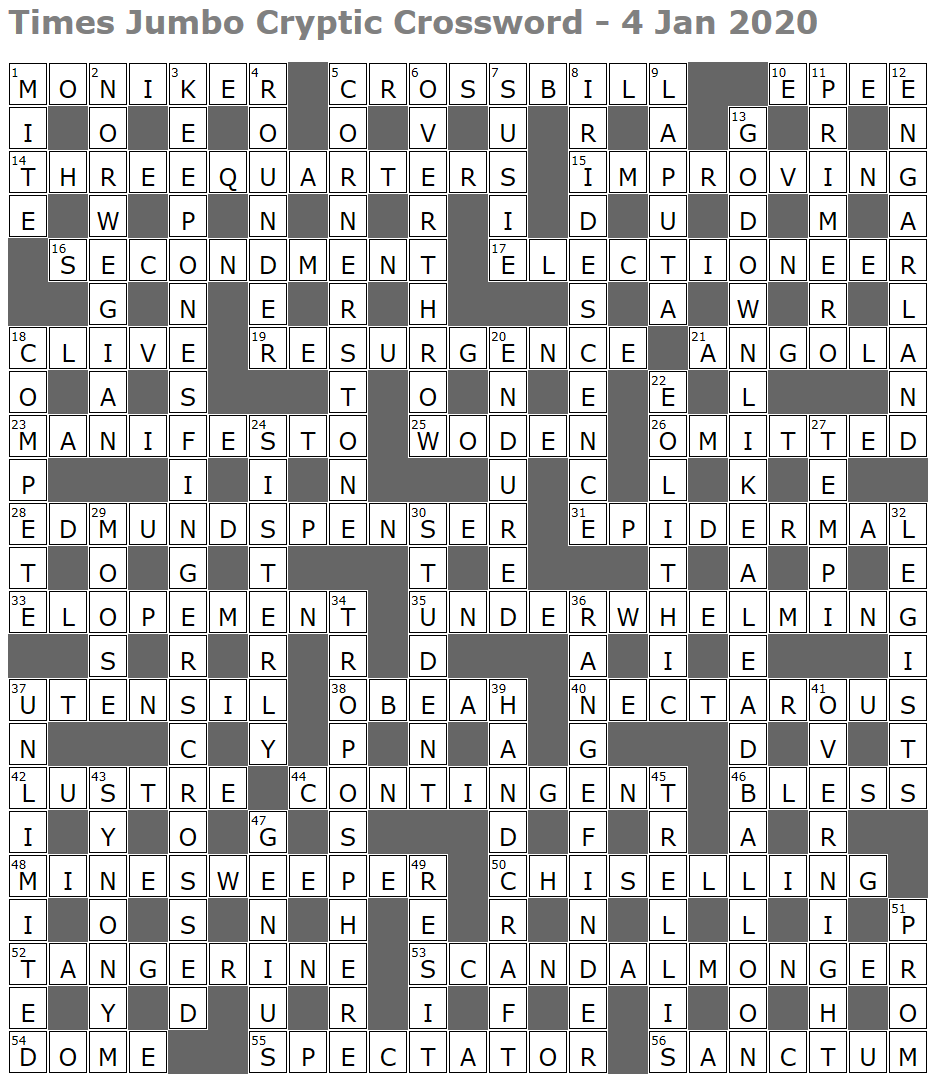 Answer: MONIKER (i.e. “name”). “By the sound of it” indicates homophone. Solution is also a homophone of MONICA, a “girl’s” name.

Answer: CROSSBILL (i.e. “flyer”, as in a bird – did a Google image search… appropriately named!). Solution is CROSS (i.e. “petulant”) followed by BILL (i.e. “head” – both words can mean a piece of land that juts out into the sea).

16. Back soldiers at start of this temporary transfer (10)

17. Terence, Leo and I contrived to campaign politically (11)

Answer: ELECTIONEER (i.e. “to campaign politically”). “Contrived” indicates anagram. Solution is an anagram of TERENCE, LEO and I.

Answer: CLIVE (i.e. “boy[‘s name]”). Solution is C (i.e. “head of class”, i.e. the first letter of “class”) followed by LIVE (i.e. “as it happens” – think live sports coverage). I’m seldom happy when forenames are used to plug awkward gaps in grids, so you can imagine my… er… delight with this one, especially considering the numerous other words that could have fitted the intersecting letters. Harrumph, etc.

Answer: ANGOLA (i.e. “SW African state”). Solution is A followed by N (a recognised abbreviation of “new”) and GOAL (i.e. “aim”) once the A has been shifted along (indicated by “holding back a”), like so: A-N-GOLA.

Answer: MANIFESTO (i.e. “policy declaration”). “Turmoil” indicated anagram. Solution is an anagram of OF TEAMS IN.

Answer: WODEN (i.e. “Anglo-Saxon god”). Solution is W (a recognised abbreviation of “western”) followed by ODE (i.e. “poem”) and N (i.e. “originally naming”, i.e. the first letter of “naming”). One gotten solely through the wordplay, to be honest.

Answer: EDMUND SPENSER (i.e. a “poet” whose ye olde spellyngs and definitions litter dictionaries to this day). Solution is EDMUND’S (i.e. “Gloucester’s son’s” – referring to Edmund, a character in Shakespeare’s King Lear, who was the illegitimate son of the Earl of Gloucester) followed by NS (i.e. “directions”, specifically recognised abbreviations of “north” and “south”) once it has been placed in or “accepted by” PEER (i.e. “noble”), like so: EDMUND’S-PE(NS)ER. A nod to Google for this, as I’ve never been much of a fan of Shakespeare.

31. Deal with prime disturbance of the cuticle (9)

Answer: EPIDERMAL (i.e. “of the cuticle”). “Disturbance” indicates anagram. Solution is an anagram of DEAL and PRIME.

35. Making little impact where security may be found around tiller (13)

Answer: UNDERWHELMING (i.e. “making little impact”). Solution is UNDER WING (i.e. “where security may be found”, as in being taken under someone’s wing) wrapped “around” HELM (i.e. “tiller”), like so: UNDER-W(HELM)ING.

37. Implement he recognised in Paris after decades with university (7)

Answer: OBEAH, which is “witchcraft or poisoning practiced in the West Indies, Guyana etc” (Chambers) (i.e. “a sorcerer may practice it”). “Partly” indicates the solution is hidden in the clue, like so: T(O BE A H)ARDMAN. Three words: Made. To. Fit!

40. Like delicious drink only initially imbibed by random centaurs (9)

Answer: NECTAROUS (i.e. “like delicious drink”). Solution is O (i.e. “only initially”, i.e. the first letter of “only”) placed in or being “imbibed by” an anagram (indicated by “random”) of CENTAURS, like so: NECTAR(O)US.

48. The writer’s one shedding tears about small naval vessel (11)

Answer: MINESWEEPER (i.e. “naval vessel”). Solution is MINE (i.e. “the writer’s”, taking the point of view of the setter) and WEEPER (i.e. “one shedding tears”) placed “about” S (a recognised abbreviation of “small”), like so: MINE-(S)-WEEPER.

Answer: SCANDALMONGER (i.e. “spreader of gossip”). Solution is SCAN (i.e. “examine”) followed by DA (i.e. attorney, specifically a District Attorney) and LONGER (i.e. “more protracted”) once it has been placed “about” M (a recognised abbreviation of “male”), like so: SCAN-DA-L(M)ONGER.

Answer: DOME (i.e. “millennium building”, specifically the Millennium Dome in London, now known as the O2 Arena). Solution is MOD (i.e. “1950s youth”) reversed (indicated by “going over”) and followed by E (a recognised abbreviation of “English”), like so: DOM-E.

Answer: SPECTATOR (i.e. “onlooker”). Solution is TA (i.e. “volunteers”, specifically the Territorial Army) placed in or “feeding” INSPECTOR (i.e. “police officer”) once the IN has been removed (indicated by “unpopular”, as in not being “in”), like so: SPEC(TA)TOR. Good clue!

56. Private room in hospital used by leader of city corporation (7)

Answer: SANCTUM (i.e. “private room”). Solution is SAN (an old slang word for a sanitorium, i.e. “hospital”) followed by C (i.e. “leader of city”, i.e. the first letter of “city”) and TUM (i.e. “corporation”, an archaic word for a tummy or belly – setters love using this).

Answer: MITE. Solution satisfies “a widow’s gift” – referring to a widow’s mite, which is “a small offering generously given” (pats Chambers) – and also “could possibly – so to speak”, referring to a homophone of MIGHT.

Answer: NORWEGIAN (i.e. “like [Edvard] Grieg”). Solution is I (i.e. “[Roman numeral] one”) placed in or “overwhelmed by” an anagram (indicated by “composition”) or NEW ORGAN, like so: NORWEG(I)AN.

Answer: KEEP ONES FINGERS CROSSED. Solution satisfies “hope for success” and “ruin one’s piano recital”. I did smile at this when I twigged it.

Answer: ROUNDER (i.e. “contribution to team’s score” – do they score runs in rounders or do they score rounders? (Shrugs)). Solution is ROUND (i.e. “canon” – one of its definitions is “a type of vocal or instrumental musical composition in which the melody is repeated by one part following another in imitation” (Chambers again); meanwhile one of round’s umpteen definitions is “a canon sung in unison” – score one to my Bradford’s here, as I would never have made the connection) followed by RE (i.e. “about” – think email replies) which is reversed (indicated by “upset” – this being a down clue), like so: ROUND-ER.

Answer: IRIDESCENCE (i.e. “shimmering effect”). Solution is E (i.e. “encountered at first”, i.e. the first letter of encountered) placed in an anagram (indicated by “relaxed”) of SCENIC RIDE, like so: IRID(E)SCENCE.

9. Literary island identified by a set in Los Angeles? (6)

Answer: ENGARLAND (i.e. “decorate”). Solution is RA (i.e. “artist”, specifically a Royal Academician) reversed (indicated by “brought up” – this being a down clue) and placed “in” ENGLAND (i.e. “part of UK”), like so: ENG(AR)LAND.

Answer: COMPETE (i.e. “take part”). Solution is COMPLETE (i.e. “accomplished”) with the L removed (indicated by “Liberal turned out” – L being a recognised abbreviation of “Liberal”).

20. Put up with outcome, entertaining daughter on river (7)

22. Early Stone Age hero regularly landed on this once (8)

Answer: SISTERLY (i.e. “like nuns, perhaps”). Solution is SLY (i.e. “knowing”) wrapped “about” an anagram (indicated by “revised”) of RITES, like so: S(ISTER)LY.

27. Characters in steamship meticulous about speeds (5)

32. They’re versed in the law, getting poets beheaded (7)

Answer: LEGISTS (i.e. “they’re versed in law”). Solution is ELEGISTS (i.e. “poets”) with the first letter removed (indicated by “beheaded”). LEGIST doesn’t feature in my Oxford dictionary, but does appear in Chambers.

Answer: TROPOSPHERE (i.e. “atmospheric layer”). Solution is R (i.e. “primarily recognised”, i.e. the first letter of “recognised”) placed in an anagram (indicated by “eccentric”) of PEER’S PHOTO, like so: T(R)OPOSPHERE.

37. Member briefly in football team, not subject to restrictions (9)

Answer: UNLIMITED (i.e. “not subject to restrictions”). Solution is LIMB (i.e. “member”) with the last letter removed (indicated by “briefly”) and placed “in” UNITED (i.e. “football team”), like so: UN(LIM)ITED.

39. Skill required to fix both taps on floating platform? (9)

Answer: OVERNIGHT (i.e. “throughout a dark period”). Solution is OVER (i.e. “top”) followed by a homophone (indicated by “we hear”) of KNIGHT (i.e. “man at Camelot”), like so: OVER-NIGHT.

Answer: SYNONYM (i.e. “it means the same thing”). “Reported” indicates homophone. Solution is a homophone of SIN ON HIM (i.e. descriptive of a “malefactor”). The “Shakespearean colonel” bit likely refers to a line containing the words SIN ON HIM, but, as mentioned, Shakespeare isn’t my bag. Sorry.
[EDIT: Thanks to several commenters here and on my About page for shedding light on this one. “Shakespearean colonel” refers to Colonel Nym, a character who appears in Henry V and The Merry Wives of Windsor, a wrong ‘un with a penchant for stealing. This would make him SINNER NYM. Thanks all! – LP]

45. Archer hugging climber at last on island where climbers are trained (7)

Answer: TRELLIS (i.e. “where climbers are trained”). Solution is William TELL (i.e. “archer”) wrapped around or “hugging” R (i.e. “climber at last”, i.e. the last letter of “climber”) and followed by IS (a recognised abbreviation of “island”), like so: T(R)ELL-IS.

Answer: PROM (i.e. “concert”). Solution is POM (i.e. “Englishman in Oz”, preferring to how Aussies refer to Englishmen) wrapped around or “absorbing” R (i.e. “start of royal”, i.e. the first letter of “royal”), like so: P(R)OM.