Another good ‘un this week, with plenty of well worked clues to keep solvers entertained. There were a few repeats to contend with, but, overall, this was good clean fun.

You can find my completed grid below along with explanations of my solutions where I have them. I hope you find them useful. If you have a previous puzzle that’s showing a few gaps then you might also find my Just For Fun page a helpful resource. While you’re here, feel free to check out the odd book review, or indulge in a short story. If I had biscuits in, I’d offer them too, but I don’t. (Hides biscuits.)

Right. (Munch, munch, munch…) To the (chomp…) solutions then. 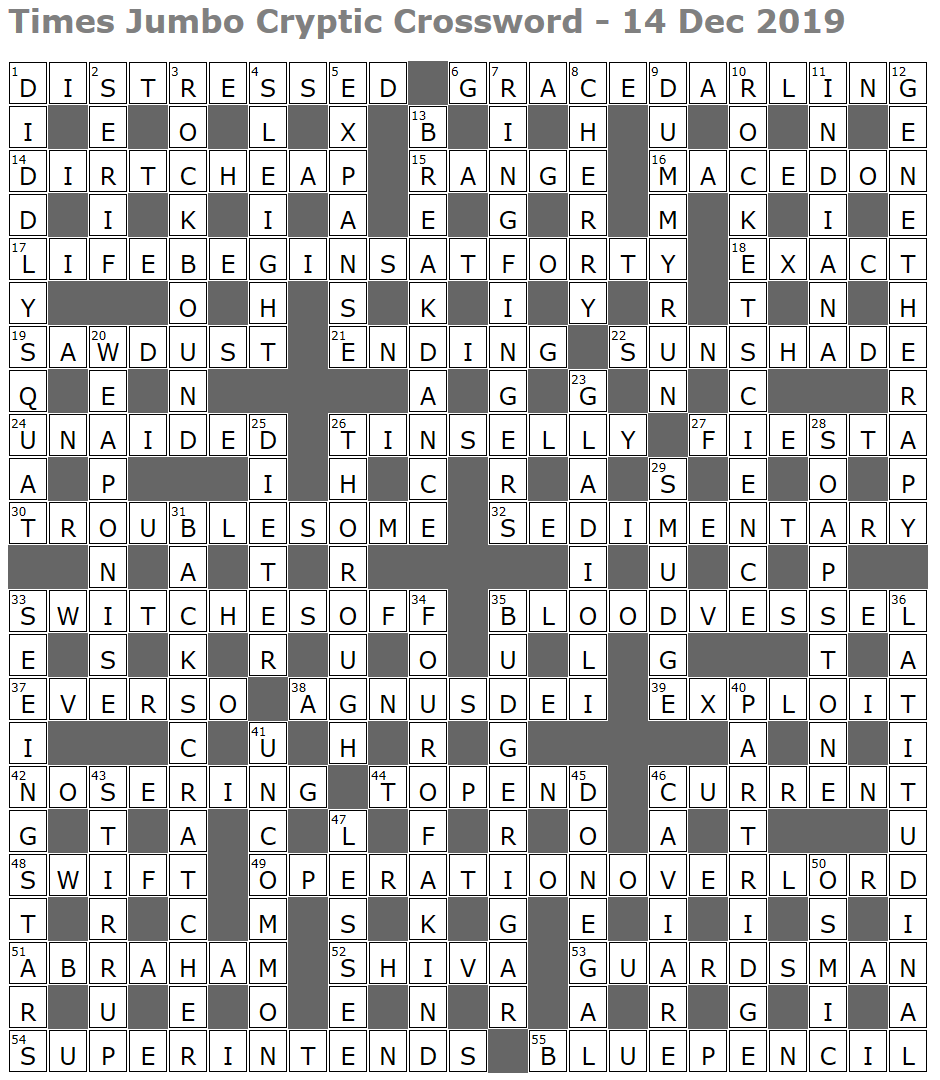 Answer: DISTRESSED. Solution satisfies “anxious” and, cryptically, “unlocked”. (Tresses and locks are other words for hair, so if one has a haircut, they could be said to be both distressed and unlocked.)

Answer: GRACE DARLING, who, in the nineteenth century, gained fame when she helped rescue survivors of a shipwreck (i.e. “rescuer at sea”). Solution is GRACE (i.e. “prayer”) followed by DARLING (i.e. “treasured”). A name that rang a bell, weirdly, though I couldn’t have said why.

Answer: MACEDON (i.e. “ancient kingdom”, also known as Macedonia, not to be confused with North Macedonia. I know, I know, it’s all Greek to me too…) Solution is MACE (i.e. “staff”) followed by DON (i.e. “teacher”).

Answer: SAWDUST. Clue refers to ash trees. If one was to take a saw to the wood from an ash tree, you’d get SAWDUST “remaining”. “Ashes”, following a cremation, are also said to be “remains”. You get the idea.

Answer: ENDING (i.e. “starting – far from it”). Solution is PENDING (i.e. “about to happen”) with the initial letter removed (indicated by “but not starting”).

Answer: UNAIDED (i.e. “alone”). “Shambles” indicates anagram. Solution is an anagram of DUDE IN A.

Answer: SWITCHES OFF (i.e. “stops paying attention”). Solution is SO (i.e. “very”) and FF (a recognised abbreviation of “fortissimo”, i.e. “very loudly”) placed “outside” of WITCHES (i.e. “women cursing”), like so: S(WITCHES)O-FF.

Answer: CURRENT. Solution satisfies “in”, as in what is hip and happening, and “flower”, referring to a river.

Answer: SWIFT. Solution satisfies “bird” and “flying”, as in speedy.

Answer: OPERATION OVERLORD (i.e. “plan of [D-Day military] action”). Solution comprises OPERATION (hinted by “who’s been stitched up”), OVER (i.e. “statement”, as in what something is about) and LORD (i.e. “peer”). The clue is a bit clunky, but the crossword trivia attached to this one more than makes up for it. Back in 1944 the Daily Telegraph published a series of crosswords whose solutions contained D-Day codewords such as “Overlord”, “Omaha”, “Utah”, “Neptune” and so on. The number of codewords and their frequency in the run-up to D-Day was found to be an incredible coincidence, but only after the setter, Leonard Dawe, was arrested and interrogated by MI5. The whole episode has been one of my favourite mysteries of the unexplained for years. Worth a read!

51. What woman might have on Noah’s son, follows a patriarch (7)

54. US president manoeuvring to bring in new controls (12)

Answer: SUPERINTENDS (i.e. “controls”). Solution is an anagram (indicated by “manoeuvring”) of US PRESIDENT which is wrapped around or “bringing in” N (a recognised abbreviation of “new”), like so: SUPERI(N)TENDS.

Answer: BLUE-PENCIL (i.e. “[to] censor”). Solution is an anagram (indicated by “appearing blurred”) of BEEN, CLIP and UL (i.e. “extremely unhelpful”, i.e. the first and last letters of “unhelpful”).

1. In America, nothing left in little house illegally occupied (6-5)

Answer: DIDDLY-SQUAT (i.e. “in America, nothing”). Solution is L (a recognised abbreviation of “left”) placed “in” DIDDY (i.e. “little”) and followed by SQUAT (i.e. “house illegally occupied”), like so: DIDD(L)Y-SQUAT.

Answer: CHERRY (i.e. “one’s stoned”). Solution is MERRY (i.e. “drunk”) with its initial letter removed (indicated by “heading off”) and placed “after” CH (i.e. “companion”, specifically a Companion of Honour), like so: CH-ERRY.

Answer: INDIANA (i.e. “[US] state”). Solution is INDIA (i.e. “nation”) followed by NA (a recognised abbreviation of “not applicable”).

Answer: GENE THERAPY (i.e. “experimental engineering”). Solution is P (a recognised abbreviation of “power”) placed “in” an anagram (indicated by “adapted”) of HEAT ENERGY, like so: GENETHERA(P)Y.

Answer: BREAKDANCE (i.e. “acrobatic entertainment”). Solution is BREAK (i.e. “holiday”) followed by DANE (i.e. “European”) once it has been placed around or “hosting” C (a recognised abbreviation of “constant”), like so: BREAK-DAN(C)E.

Answer: GLADIOLI (i.e. “bloomers”). Solution is D (a recognised abbreviation of “daughter”) placed “in” AIOLI (i.e. “dressing”, and very tasty it is too) and the whole then preceded by (indicated by “initially”) GL (i.e. “girl disheartened”, i.e. the word “girl” with the middle letters removed), like so: GL-A(D)IOLI. A clue that scans rather well.

Answer: DIETER. Solution satisfies “German”, as in a German forename, and “one looking to shift stones, perhaps”, as in one who diets. This took a lot longer for me to spot than it ought to have!

28. Soft rock beginning to shake pensioners – stress down below (9)

Answer: SOAPSTONE (i.e. “soft rock”). Solution is S (i.e. “beginning to shake”, i.e. the first letter of “shake”) followed by OAPS (i.e. old age “pensioners”) and TONE (i.e. “stress”). “Down below” indicates the composite parts are stacked on top of one another, this being a down clue. I remembered this from a previous puzzle, which made it an easier get.

Answer: SMUDGE (i.e. “mark”). “In” indicates the solution is hidden in the clue, like so: TROUSER(S MUD GE)NERALLY.

Answer: BACKSCRATCHER (i.e. “one with a long reach”). Solution is SCRATCH (i.e. “devil”, sometimes known as Old Scratch) placed or “punched” into BACKER (i.e. “angel” – as in a financial backer), like so: BACK(SCRATCH)ER. Another really good clue.

35. Chirpy character has to fix car that won’t start after shift (10)

Answer: BUDGERIGAR (i.e. “chirpy character”). Solution is RIG (i.e. “to fix” an outcome) followed by CAR once its initial letter has been removed (indicated by “that won’t start”), and the whole then preceded by or placed “after” BUDGE (i.e. “shift”), like so: BUDGE-RIG-AR.

36. Inuit a tad confused between lines around the Arctic Circle, say? (11)

Answer: LATITUDINAL (i.e. “lines around the Arctic Circle, say”). Solution is an anagram (indicated by “confused”) of INUIT A TAD placed in L and L (recognised abbreviations of “line”), like so: L-(ATITUDINA)-L.

43. Put foot in it when racing to correct purist about last bit of grammar (7)

Answer: STIRRUP (i.e. “put foot in it when racing”). Solution is an anagram (indicated by “to correct”) of PURIST placed “about” R (i.e. “last bit of grammar”, i.e. the last letter of “grammar”), like so: STI(R)RUP. Another one made easier having appeared in several puzzles this past year.

Answer: DONEGAL (i.e. “Irish county”). Solution is DONE (i.e. “tricked [someone]”) followed by GAL (i.e. “colleen”, taken to be a girl’s name with a misleading lack of capitalisation).

47. Tenant with not as much space, miserable ultimately (6)

Answer: LESSEE (i.e. “tenant”). Solution is LESS (i.e. “with not as much”) followed by E and E (i.e. “space, miserable ultimately”, i.e. the last letters of “space” and “miserable” – the comma acting as a list separator), like so: LESS-E-E. An easier get, as this solution also appeared last week!