An easier time of it this week, though there were still a few exotic solutions to keep things spicy. You can find my completed grid below along with explanations of my solutions where I have them. I hope you find them useful.

As ever, a spot of housekeeping first. If you have a recent Times Jumbo Cryptic that has left you baffled in some way, then you might find my Just For Fun page a fine place to visit. If you like reading more than just crossword solutions, however, then I have a few book reviews that might interest you too.

Right. On with the show. I’m writing this via 4g as my broadband has packed in, so I’d better be quick before my phone melts through the chair arm. 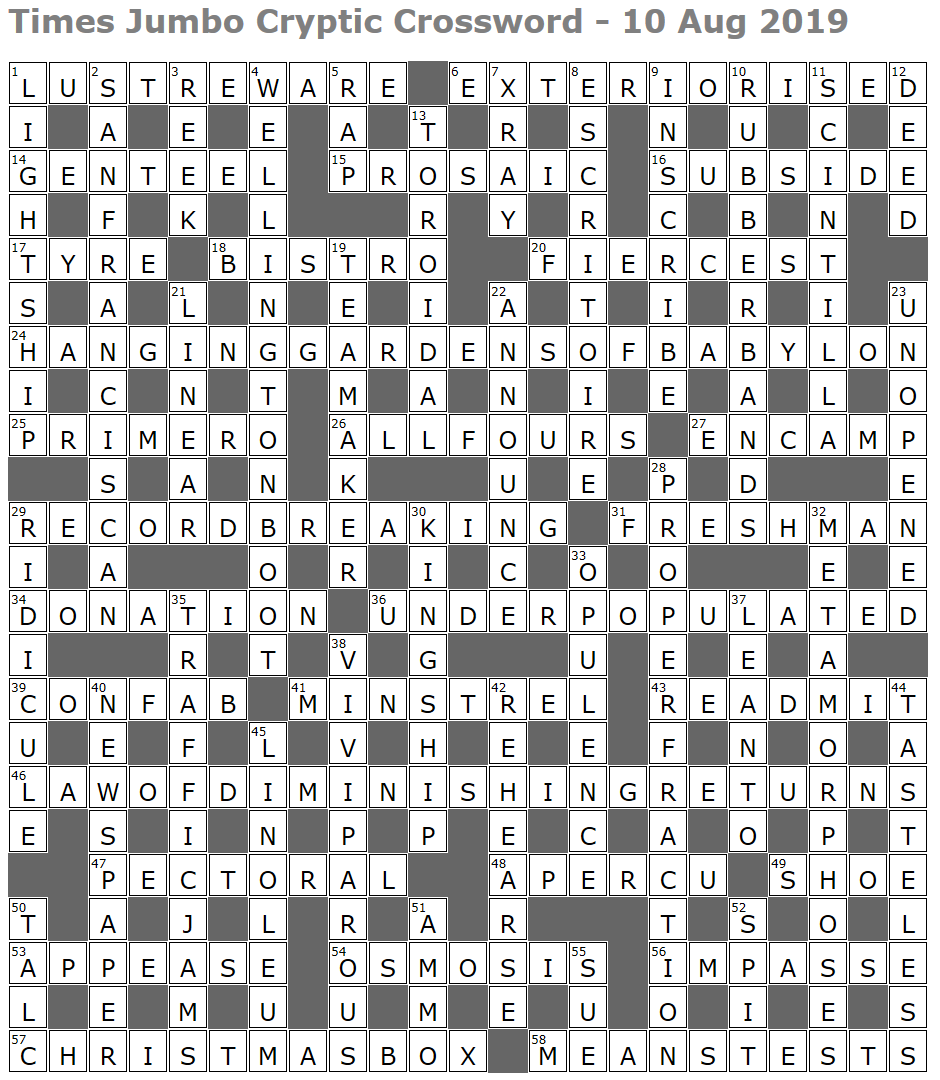 1. Large American plane for one going across to fight China (10)

Answer: LUSTREWARE, which is pottery that has a metal glaze (i.e. “china” – ignore the misleading capitalisation). Solution is L (a recognised abbreviation of “large”) followed by US (i.e. “American”) and TREE (i.e. “plane”, specifically any tree of the genus Planatus, it says here. I remembered this usage from a previous puzzle, if I’m honest) which is wrapped around or “going across” WAR (i.e. “to fight”), like so: L-US-TRE(WAR)E. “For one” is strangely redundant, so I might not have this fully right.

Answer: EXTERIORISED, which is to temporarily bring an internal part outside of the body (i.e. “brought out in surgery”). “Doctor” indicates anagram. Solution is an anagram of RETRIES OXIDE.

Answer: PROSAIC (i.e. “bland”). Solution is ROSA (i.e. “genus of flowers”) placed inside or “filling” PIC (i.e. “image”), like so: P(ROSA)IC. Got this mainly thanks to the same solution featuring in last week’s grid.

20. None more vicious than this violent strife besetting church (8)

Answer: FIERCEST (i.e. “none more vicious than this”). Solution is an anagram (indicated by “violent”) of STRIFE wrapped around or “besetting” CE (i.e. “church”, specifically Church of England), like so: FIER(CE)ST.

Answer: HANGING GARDENS OF BABYLON, one of the Seven “Wonders” of the World. Solution is an anagram (indicated by “nasty”) of YOB NABS RED FLAG followed by ON (i.e. “no flipping”, i.e. the word NO reversed) which are then both placed “behind” HANGING (i.e. “curtain”), like so: HANGING-GARDENSOFBABYL-ON.

Answer: ALL-FOURS (i.e. “one” – the ellipsis indicates we’re continuing the context of the previous clue, so we’re seeking another card game. And, no, I don’t know this one either!) Solution is ALL (i.e. “completely”) followed by an anagram (indicated by “spoiled”) of FOR US.

Answer: ENCAMP (i.e. “put up tents”). Solution is EN (i.e. “quarters”, as in two of the four points or “quarters” of a compass, in this case East and North) followed by CAMP (i.e. an “affected” manner).

Answer: FRESHMAN (i.e. “who’s just gone up” – “up” can mean “in residence at school or college”, which I faintly remembered from a previous puzzle. A freshman is a new entrant to a school or college.). Solution is FRESH (i.e. “cheeky”) followed by MAN (i.e. “bishop maybe”, referring to how chess pieces are sometimes referred to as men).

Answer: DONATION (i.e. “offering”). Solution is DO (i.e. “prepare” – it’s in the dictionary, but I can’t immediately think of a sentence that uses the word in this way) followed by NATION (i.e. “state”).

Answer: UNDERPOPULATED (i.e. “with few people”). “Guide” indicates anagram. Solution is an anagram of TURNED UP and PEDALO.

Answer: CONFAB (i.e. “talk”, short for confabulation. Hands up anyone who uses “conflab” even though it’s not in the dictionary? Yup. Me too.) Solution is C (a recognised abbreviation of circa, i.e. “roughly”) followed by ON (i.e. “about”, as in “this week’s blog post is on the latest Times Jumbo Cryptic crossword”), then F (a recognised abbreviation of “female”) and AB (i.e. “sailor”, specifically one that is Able-Bodied), like so: C-ON-F-AB.

41. He serenades Poles in joint with learner (8)

Answer: MINSTREL (i.e. “he serenades”). Solution is NS (i.e. “poles”, as in North and South) placed “in” MITRE (i.e. “joint” – a mitre joint is where two pieces of wood have a 45 degree edge so they help form a right-angle when put together) and then followed by L (a recognised abbreviation of “learner”), like so: MI(NS)TRE-L.

Answer: LAW OF DIMINISHING RETURNS (i.e. “economic rule”). “Flourished” indicates anagram. Solution is an anagram of FROM WHEN INDUSTRIALISING.

Answer: PECTORAL (i.e. “touching chest”, as in the definition “of, for, on or near the breast or chest” rather than the muscle). Solution is PECT (i.e. “kissed noisily”, i.e. a homophone of PECKED) followed by ORAL (i.e. “mouth”).

Answer: APERCU, which can mean an immediate intuitive insight (i.e. “witty comment” – I guess “wit” in this context means being clever as opposed to being funny). Solution is A (a recognised abbreviation of “answer” as in Q&A) followed by PER (i.e. “for each”) and CU (chemical symbol of “copper”). One I got solely through the wordplay.

Answer: SHOE (i.e. “mule perhaps” – a variant definition of the word is a backless slipper or shoe). Solution is H (a recognised abbreviation of “hard” used in grading pencils) “going in” SOE (i.e. “wartime force”, specifically the Special Operations Executive) like so: S(H)OE. One of those where I said, “I wonder if a mule is a kind of shoe” and was happy to find it was. Doesn’t always happen like that.

Answer: MEANS TESTS (i.e. “checks on income”). Solution is MEAN (i.e. miserly or “reluctant to give”) followed by ST (i.e. “way”, as in a recognised abbreviation of “street”) and then an anagram (indicated by “new”) of SETS, like so: MEAN-ST-ESTS.

Answer: LIGHTSHIP, which is a ship that acts like a lighthouse, i.e. “main beacon”. Setters love using “main” to mean the sea. Solution is LIGHTS (i.e. “illuminates”) followed by HIP (i.e. “joint”).

Answer: SAN FRANCISCAN (i.e. “resident in US port”). Solution is SANE (i.e. “stable”) with the last letter removed (indicated by “cut”) and then followed by FRANCISCAN (i.e. monk or “brother”).

3. Stench from burn about to disappear (4)

Answer: REEK (i.e. “stench”). Solution is CREEK (i.e. “burn”, as in a waterway) with the C removed (indicated by “about to disappear”, C being a recognised abbreviation of circa or “about”).

Answer: WELLINGTON BOOT. “One of two confining the flanks” – flanks are sides, which in this case are left and right. Your left and right feet can be “confined” in wellies. “Waterloo” refers to the Battle of Waterloo, in which the Duke of Wellington did alright. You get the idea.

Answer: RAP. Solution satisfies “blame” – as in to take the rap for something – and “strike”.

Answer: ESCRITOIRE, which is a secretary desk or “bureau”. It’s a mishmash of desk, drawers and bookcase which obviously demanded its own word once upon a time. Solution is ESC (i.e. “escape” as in the Esc key on your keyboard) followed by RITE (i.e. “ceremony”) which is wrapped around or “involving” O (a recognised abbreviation of “old”) and IR (i.e. ditto “Irish”), like so: ESC-RIT(O-IR)E. One I got from the wordplay and a quick shufti through my Chambers.

9. What chisellers do in bed in Home Counties? (8)

Answer: RUBBER BANDS (i.e. “they secure”). Solution is RUB (i.e. “polish” – ignore the misleading capitalisation) and BANDS (i.e. “gangs”) wrapped around or “seizing” B (a recognised abbreviation of “black” used in chess) and ER (i.e. “ruler”, specifically Elizabeth Regina), like so: RUB-(B-ER)-BANDS.

Answer: SCINTILLA (i.e. “a little bit”). “Broadcast” indicates anagram. Solution is an anagram of I CAN STILL. This is one of those words I heard once and it immediately stuck. In this case, I have The Day Today to thank. (Resists urge to fill rest of blog post with favourite quotes…)

Answer: DEED (i.e. “act”). “One way or another” indicates the solution is a palindrome.

Answer: TEA-MAKER (i.e. “early drink from this”. Not me. I start my day with a manly shot of tabasco sauce in each eye. RRRRRRRRR!!!!) Solution is TEAM (i.e. “side”) followed by A and then K and ER (i.e. “royal couple”, specifically recognised abbreviations of king (in chess or cads) and queen, i.e. Elizabeth Regina), like so: TEAM-A-(K-ER).

Answer: UNOPENED (i.e. “still in its wrapping”). “Novel” indicates anagram. Solution is an anagram of END UP and ONE.

Answer: RIDICULE (i.e. “scorn”). Solution is RULE (i.e. “regulation”) which is wrapped around or “limiting” ID (i.e. “papers”, as in a short form of “identification”) and IC (a recognised abbreviation of “in charge”), like so: R(ID-IC)ULE.

Answer: LEAN-TO (i.e. “shelter”). Solution is LEPANTO (i.e. “sea battle”) with the P (“papa” in the phonetic alphabet) removed (indicated by “leaving”). A near carbon-copy of this clue only a couple of weeks ago. I mean, there’s freebies and then there’s this. Come on, ed!

Answer: VIVIPAROUS, which describes species in which young reach an advanced stage of development before delivery (i.e. “most mammals”). Solution is VIP (i.e. “lion” – this can be taken to mean an important person) placed in an anagram (indicated by “nuts”) of VARIOUS, like so: VI(VIP)AROUS. One I got though the wordplay, and the fact a very similar word appeared in last week’s grid. A cool word, still.

Answer: REHEARSE (i.e. “practise”). Solution is RE (i.e. “on” or regarding – think email replies) followed by HEARSE (i.e. “late transport”, a play on how “late” can mean deceased).

Answer: TASTELESS (i.e. “crude”). Solution is STELE (i.e. “Greek column” – over to my Chambers here: a stele is “an upright stone slab or tablet” derived from the Greek word stele meaning “from root of”. So now you know.) placed in or “accepted by” TASS (i.e. “news agency” – and back into my Chambers again. TASS was the Telegrafnoye Agentstvo Sovietskovo Soyuza, a telegraph agency of the former Soviet Union. Right-oh, then). One of those weird clues where the solution was significantly easier than the wordplay used to derive it!

Answer: TALC. Solution is TLC (a recognised abbreviation of “tender loving care”) wrapped around or “protecting” A (ditto “area”), like so: T(A)LC. Within the context of the clue you might use a little talc to help protect an area of the skin. Unless you wear black.