Alrighty then. Having spent the last couple of weeks dipping my thirsty bits in lager – so much lager – it’s time to catch up on a few of these jumbo cryptics. So here’s the one from a couple weeks ago – a bit late for anyone to wanting the chance to score a free dictionary perhaps, but that’s tough titty toenails. Sometimes life must come first.

So without further blathering: 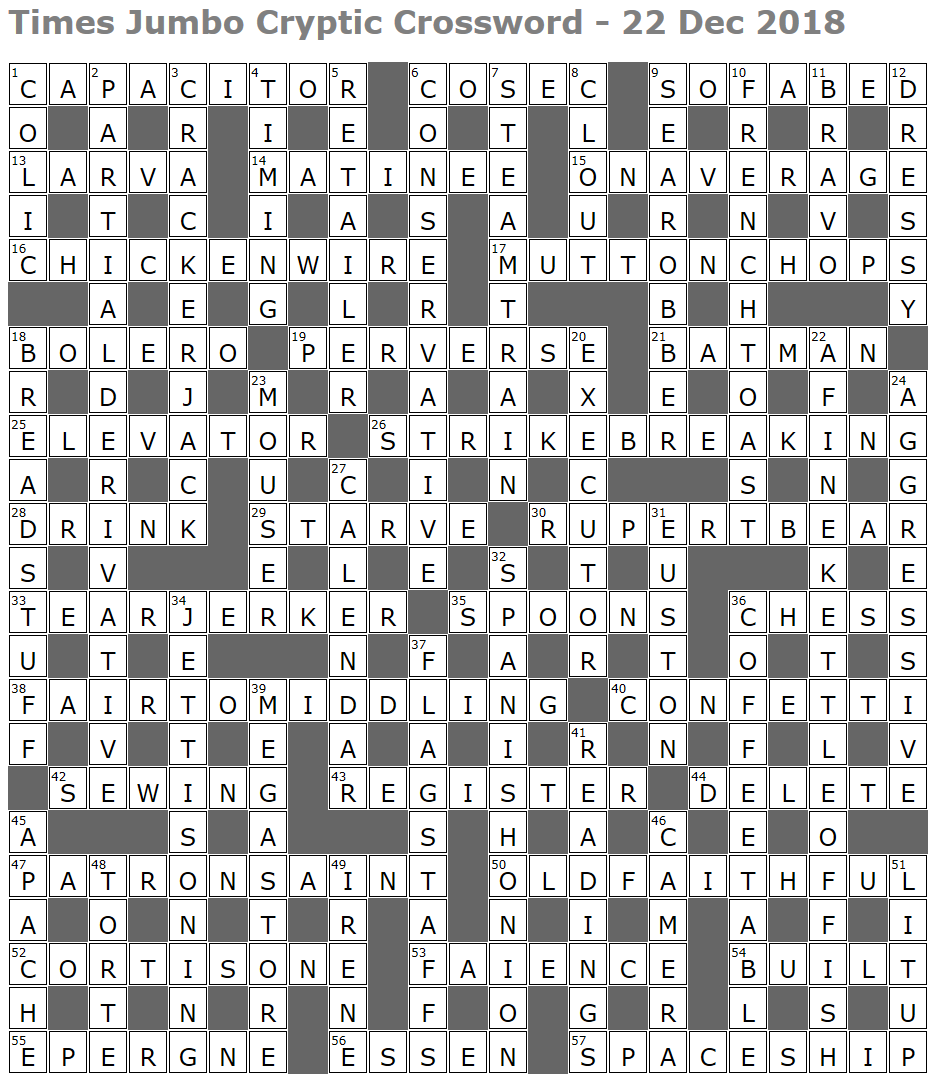 Answer: COSEC, short for cosecant, which is one of the six trigonometric “functions” of an angle. Solution is EC (i.e. “city”, specifically the postcode area of the City of London, in case anyone outside the M25 was wondering) placed after COS (i.e. “island”), like so: COS-EC.

Answer: BATMAN (i.e. “superhero”). Solution is BATSMAN (i.e. “Grace”, specifically W.G. Grace, the original beard to be feared), with the middle letter S removed (i.e. “no heart”). This took some time for me to twig which Grace the setter had in mind. Well played.

Answer: STRIKE-BREAKING. Solution satisfies both “hammer” – i.e. strike – “slowing down, we hear” – i.e. a homophone of “braking”, and “working despite [industrial] action”.

35. More than one server watches others returning (6)

Answer: SPOONS. Solution satisfies both “more than one server” and “watches others returning” i.e. the word “snoops” reversed.

40. Often it is scattered on couples, primarily (8)

Answer: DELETE (i.e. a “key” on a keyboard). Solution is LET (i.e. “allowed”) “held by” DEE (i.e. “banker”, specifically the River Dee – I’ll let you pick which one). This was another one that I had to chew over for a while before figuring out the wordplay. Again, this nerd approves.

Answer: OLD FAITHFUL. Solution satisfies both “jet in America” and “over the hill, unswerving”.

Answer: CORTISONE (i.e. “hormone”). Solution is an anagram (indicated by “reproduced”) of IS NOT placed in CORE (i.e. “the heart”) like so: COR(TISON)E.

Answer: FAIENCE (i.e. “earthenware” – no, me neither). Solution is FENCE (i.e. “criminal”) “stealing” AI (i.e. “perfect” – setters like substituting AI with A1 in their solutions), like so: F(AI)ENCE.

Answer: EPERGNE (i.e. “stand on table” – I can’t say I have one knocking about the place. I can’t say the word itself either.) Solution is an anagram (indicated by “novel”) of GREENE placed around (i.e. “inspiring”, if weakly) P (i.e. “plaudits originally”, i.e. the first letter of “plaudits”).

Answer: ESSEN (i.e. “German city”). “Contributing” suggests the solution is hidden in the clue, like so: BUSIN(ESS EN)ERGISED.

Answer: COLIC (i.e. “early pain”). “Starts to” indicates the solution can be found in the initial letters of Creep Onward Lasting Into Childhood.

2. Reeling initially in private, I validate wrong rate of change (7,10)

Answer: PARTIAL DERIVATIVE, which, in mathematics, is a derivative obtained by letting only one of several independent variables vary, i.e. “rate of change”. Keep up. Solution is R (i.e. “reeling initially”, i.e. the first letter of “reeling”) placed “in” an anagram (indicated by “wrong”) of PRIVATE I VALIDATE.

Answer: TIMING (i.e. “comedic skill”). “In” indicates the solution is hidden in the clue, like so: I(T IM ING)ENIOUS.

5. One complaining about front being removed from pet shop (8)

Answer: CONSERVATIVE. Solution satisfies both “blue” (as in the colour of the Conservative Party) and “square”.

Answer: CLOUT. Solution satisfies “lay one on” and “authority”.

9. One moaning about sensitivity in buccaneer (3,6)

Answer: MOUSER. Solution satisfies both “Tick, one exploiting” – i.e. one using a computer mouse to tick a box – well, that’s my take on it anyway; and “cat”.

Answer: SPANISH ONION (i.e. “vegetable”). Solution is an anagram of IN SOON (indicated by “stew”) with PAN (i.e. “cooker”) and IS and H (a recognised abbreviation of “hot”) placed “inside”, like so: S(PAN-IS-H)ONION.

Answer: JETTISONING (i.e. “dumping fuel”). Solution is JETTING (i.e. “flying”) wrapped “around” IS (a recognised abbreviation of “island”) and ON (i.e. “one briefly”, i.e. the word “one” with the final letter removed), like so: JETT(IS-ON)ING.

37. Weaken county where standards may be lowered (10)

Answer: MEGASTORE (i.e. “giant in business”). Solution is MEG (i.e. a shortened form of “Margaret”), followed by ASTOR (i.e. “pioneering female Conservative”, specifically Nancy Astor, the first woman to sit in the House of Commons) and then E (a recognised abbreviation of “European” used in E numbers).

Answer: READINGS (i.e. “measurements”). Solution is D (i.e. “disaster initially”, i.e. the first letter of the word “disaster”) placed in an anagram (indicated by “new”) of ERASING, like so: REA(D)INGS.

46. Still producer turned up before artist (6)

Answer: IRENE (i.e. the Greek “goddess” of peace). Solution is IREN (i.e. “topless femme fatale”, i.e. the word “siren” with the initial letter removed) followed by E (a recognised abbreviation of “English”), like so: IREN-E.

Answer: LIT UP. Solution satisfies both “drunk” – i.e. inebriated – and “was illuminating”.

So there we go; catching up slowly. I rather liked this puzzle, truth be told, despite a few iffy clues. It was a damn sight more enjoyable than the Boxing Day grid, about which I’ll bore you all in my next post – or at least I will once I’ve trimmed most of the swear words from it.