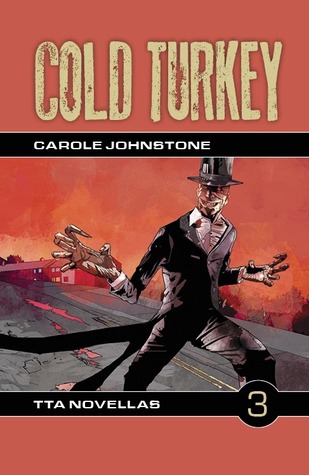 Disclaimer: This review is based upon an advance proof of Cold Turkey, provided by TTA Press.

Cold Turkey marks TTA Press’ third entry in their novella series and was written by Carole Johnstone, who has contributed a number of stories to TTA’s Black Static magazine over the years. In it we find the story of a primary school teacher called Raym and his increasingly bizarre battle to quit smoking.

We initially find Raym fretting over his health and dwelling on the recent deaths of his parents, both having succumbed to separate smoking-related illnesses. When he resolves to kick his own twenty-a-day habit for the umpteenth time he immediately finds his sleep plagued with bizarre, trippy nightmares where he is chased around a surreal landscape liberally populated with assorted sci-fi and horror icons of his youth.

But there is someone else in Raym’s dreams, a terrifying constant, a fragment of his childhood made manifest in a tall, spindly man dressed in a crooked top hat and tails. The man’s fingers are long and dancing, his mouth is “the idea of a sharp-toothed grin”, and his arrival is chillingly foreshadowed by jangling ice-cream van chimes. He is Top Hat, the tally van man.

When Top Hat starts leaking into the real world, Raym begins to fear for his sanity. The chimes stalk him through empty streets. He finds himself being chased all the way to the school doors on a morning. Worse still, he finds he’s starting to lose time: an hour here, an hour there. And all the while Top Hat keeps asking him, “Are you done with all this yet?”

As much as he would love to dismiss Top Hat as a mere hallucination, Raym fears the tally van man is real for he’s not the only one to have seen him. Some of the schoolchildren have seen him too…

Which gets us into the meat of Cold Turkey, if you’ll forgive the pun.

Those of you with sufficient stamina for my reviews will recall I was rather impressed with TTA Press’ previous novella release, Spin by Nina Allen. Does Cold Turkey continue this fine standard?

It’s just those first twenty or so pages. I found them a little difficult to read in that sentences would veer off here and there, (sometimes spanning a couple of lines, housed within parentheses) sometimes via tangents that – and I’m only hypothesising here – were perhaps an attempt to convey a sense of the gossipy undercurrent that exists within every close-knit community… which I found jarring. A few times I was forced to backtrack and reread a passage to make sure I had it right.

(That said, I’m not the quickest reader on the planet. I tend to chew over the words as I read them. You might therefore find these early chapters an easier read.)

Happily, once beyond those initial chapters the story becomes a smoother ride and one well worth a read. While TTA’s previous novella, Spin, was a literary blend of science fiction and fantasy, Cold Turkey is a horror story through and through.

Raym’s parabolic glide between bleak sanity and potential madness is deftly handled and well-paced. This is frequently helped by a cast of well-drawn and often excellent secondary characters for Raym to riff against, chief among them Wendy, his long-suffering other half.

The grimness of Raym’s predicament is often leavened by some well-judged humour, particularly within a number of staff room scenes. (The caretaker, Lachlan’s, sweary turn at the Easter Fayre elicited a genuine belly laugh.) It all helps to keep those pages turning.

While Raym is not the most likeable central character in the world, he does have his moments. The way he tries to deflect a young pupil’s terror upon seeing Top Hat, despite his own fears, has you warming to him. (You could of course argue he should be doing this anyway, being a teacher.) The cunning he shows in twisting a bad situation to his advantage, specifically his missing hours, also had me nodding in appreciation, if perhaps not his… um… “extracurricular” reasons for doing so.

And then there’s the ending, one which I think will linger long in the mind. It’s powerful stuff indeed, going from the comically awful to the breathtakingly horrifying within the space of a few uneasy pages. I think I actually uttered “Holy shit!” under my breath while reading it. Great stuff!

Would I recommend Cold Turkey? Absolutely. Persevere with those first few chapters and you’ll be rewarded with an evening’s read of some mighty fine horror.

Just don’t sneak away for a nervous ciggie midway through…