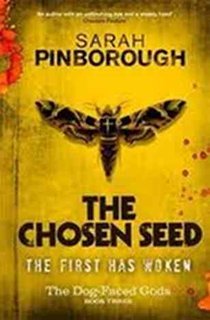 Note: this review for “The Chosen Seed” contains spoilers for “The Shadow of the Soul” and “A Matter of Blood”.

“The Chosen Seed” is the final book of Sarah Pinborough’s “Dog-Faced Gods” trilogy (also known as the “Forgotten Gods” trilogy in the US) and concludes the story of Detective Inspector Cassius Jones following the frantic conclusion of “The Shadow of the Soul”.

Dr Hask and DI Ramsay are hunting for the newest killer stalking London, one who is murdering people using the lethal Strain II virus, a stronger derivative of HIV. A dying victim recalls a clean-cut man in his early thirties saying to her “For this is the word of your God. Spread it.” Shortly afterwards she began to display symptoms.

Meanwhile Cass Jones is on the run following the murder of a man linked to the disappearance of his nephew, Luke, and also that of Adam Bradley (the real murderer). While his former colleagues, Hask and Ramsay, have a hard time accepting his guilt, Jones’ former partner, DS Armstrong, has no such concerns. He is hell-bent on bringing Jones to justice.

Jones lies low while his underworld contacts arrange a new identity for him, but his mind is alive with the mysterious Mr Bright, a man who has long pulled his strings and those of his family, and someone who most certainly knows what happened to Luke. Events take an unusual turn, however, when Jones’ murky undercover past comes back to haunt him.

All is not well within Mr Bright’s world and those of the Cohort – his fellow eternal, otherworldly beings. Not only do some find themselves dying, but now it appears an emissary has appeared, having seemingly come to Jones’ rescue at the end of the previous book. Her presence is a bad omen that suggests the imminent arrival of Him and the onset of the Rapture. At the same time the first of their kind has finally woken from his comatose state and is found to be in no fit state to lead the Cohort as hoped. He has woken an old man, meek and scared.

So here we have it, the final part of “The Dog-Faced Gods” trilogy, and while it’s better than “A Matter of Blood”, I didn’t find it quite as good as “The Shadow of the Soul”. The pages fly just as fast, the plot keeps on coming like a flood, the characters are just as good, and – yay! – there are no passwords being guessed, but… I don’t know… there were a few things that kept the book tantalisingly short of excellent.

For example, the underlying threat of revenge hanging over Jones and his undercover past, touched upon several times during the previous two books, comes to very little. Any bad blood is all too quickly forgotten. The brutal cruelty meted out to one of the characters (you’ll know when you get to it) also left a bad taste in the mouth. (The same could be said of Mr Craven’s exploits in the previous book.) Finally, and this is for me a minor point, when you take a step back from the trilogy and consider it as a whole you could be left wondering why no other religions were touched upon at all, though this was perhaps a conscious decision to keep an already huge story as lean as possible.

That said, there are some excellent scenes too. The finale is well worked, with a real sense of urgency and impending doom in the run-up. I couldn’t turn the pages fast enough once it got going. The epilogue gives some real satisfying closure to the story. Yes, the story could be re-opened later down the line, but you at least feel there is no need to do so (i.e. there is no “Meanwhile at Camp Crystal…” bullshit to contend with at the end).

I think the faults I have with the trilogy mostly stem from the incredibly complex plot that spans all three books – nearly 1200 pages’ worth. Beneath the main plot threads touched upon in my reviews you will find a ton of subplots, incidents and secondary characters. Given all that, it is perhaps inevitable that some panel-beating would be required to fit it all in. Taken as a whole, I’d suggest not looking too hard at the few niggles that exist and tuck in, folks. There’s a lot of good stuff here to chew over.

The Dog-Faced Gods marked my first foray into Sarah Pinborough’s work. Now if you’ll excuse me I’m off to seek out “Mayhem”.