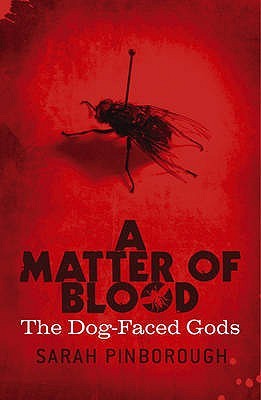 They’re funny old things, book trilogies. Some genres seem to suit them better than others. For example, you’ll be doing well to pick a sci-fi or fantasy novel off the shelves and not find it “Volume whatever of The Handlecrank Trilogy”. (Usually the second.) There are some genres, however, that are ill-suited to trilogies. Crime, for example, where the book series is king owing to its inherent case-by-case story structure. Horror, too, is often stony ground for trilogies. (Tales of high terror and nerve-shredding peril tend to lose something when you know the protagonist needs to survive to book three.)

So when someone takes the crime and horror genres and then fashions them into a dark fantasy trilogy I’m left with two thoughts. One is: “There’s something you don’t see every day.” The other: “I want to read that!”

All such blathering leads me to Sarah Pinborough’s “Dog-Faced Gods Trilogy”. (Also known as “The Forgotten Gods Trilogy” in the US.)

“A Matter of Blood” is the first of the trilogy, in which we find London suffering under the weight of recession, a highly-contagious new strain of HIV and a serial killer known as the Man of Flies.

The wider world is largely beholden to The Bank: an organisation that was formed by the wealthiest to pour oil over choppy economic waters, one whose fingerprints cover nearly every financial transaction made, but also one that is secretly controlled by cohorts of otherworldly beings. When one of the cohort starts to die – something that isn’t supposed to happen to the everlasting – discord and fear build through the ranks.

Amid all of this we are drawn into the messy world of Detective Inspector Cassius Jones as he investigates a string of murder victims: each with the words NOTHING IS SACRED written across their chest; each sporting a neat arrangement of fly eggs about their person. Meanwhile a parallel investigation is attempting to track the killers of two school friends in what appears to have been a botched gangland hit.

When someone anonymously deposits a DVD at the station showing the boys’ shooting, intrigue is notched higher still. Or at least, that is, until Christian, Cass’ brother, apparently shoots his wife, young son and then himself.

The yes: In “A Matter of Blood” we are given a believable alternate London with a large cast of well-drawn characters on both sides of the law. The star of the show is, of course, Cass Jones, a satisfyingly complex character whose rough edges – his chequered history, his infidelity, his acquaintance with Charles (so to speak), his foot in the criminal underworld – instantly engage the reader. Such a large cast makes for a lot of plot to chew over, and, happily, there isn’t much flab in those pages.

The but: Plot advancement and pacing is sometimes reliant on characters doing dumb or unbelievable things, often jarringly so. An example of a dumb move sees Cass attempting to gain illegal access to The Bank’s headquarters. It quickly becomes apparent why, for the sake of the plot, he does this, but his motive in doing so is weak. Indeed, when he later questions his dumb move you can’t help but wonder if there’s a hint of authorial voice in there. A rather large example of plot-stalling emerges once you’ve read the trilogy and realise one key (and short-lived) character could have saved at least a book and a half by getting to the point and not talking in unnecessary riddles.

More yes: the near-future world in which this all takes place is often brilliantly realised. There is an excellent sense of place in each scene, achieved not through pages of dry description, but through the observations of believable characters. The police procedural elements of the story are so well done there were often times I forgot I was reading a dark fantasy story.

More but: You have all this sterling attention to detail only to then see the story resort to hoary old plot tropes such as “Guess The Login Password”! (And a two-character password at that. If you listen carefully you can hear a million IT guys across the world “WTF” simultaneously, and a squillion office workers say “Huh, I wish.”) Seriously, folks, there are less clunky ways of gaining access to a locked laptop.

So it goes, back and forth, between the really good and the not-quite-so-good. If you can accept the story for what it is and don’t peek too deeply into its plot holes then you’ll find a lot here to enjoy. It does suffer a little for being the first of a trilogy, but, rather like Mark Hodder’s “Burton & Swinburne” series, the story really picks up in subsequent books.

If the somewhat permeable nature of some trilogies (*cough* Night Watch *cough*) has left you jaded, it’s also worth mentioning that there is a genuine sense of closure in “The Dog-Faced Gods”.

(Unless, of course, the planned TV series is a roaring success, in which case all bets are off!)

3/5, but this is a trilogy worth sticking with.