Not the Bank Holiday stinker that was feared. A pretty average strength puzzle in the end, which is all fine and dandy with me. All the more time to get other things done!

As ever, you can find my completed solution below along with explanations of my solutions where I have them. I hope you find them helpful. Posts covering the previous 100+ of these things can be accessed via my Just For Fun page. Meanwhile, I’ve also got some dusty old book reviews and a story of mine.

Till next time, keep safe, mask up and continue to support the NHS and key workers everywhere. 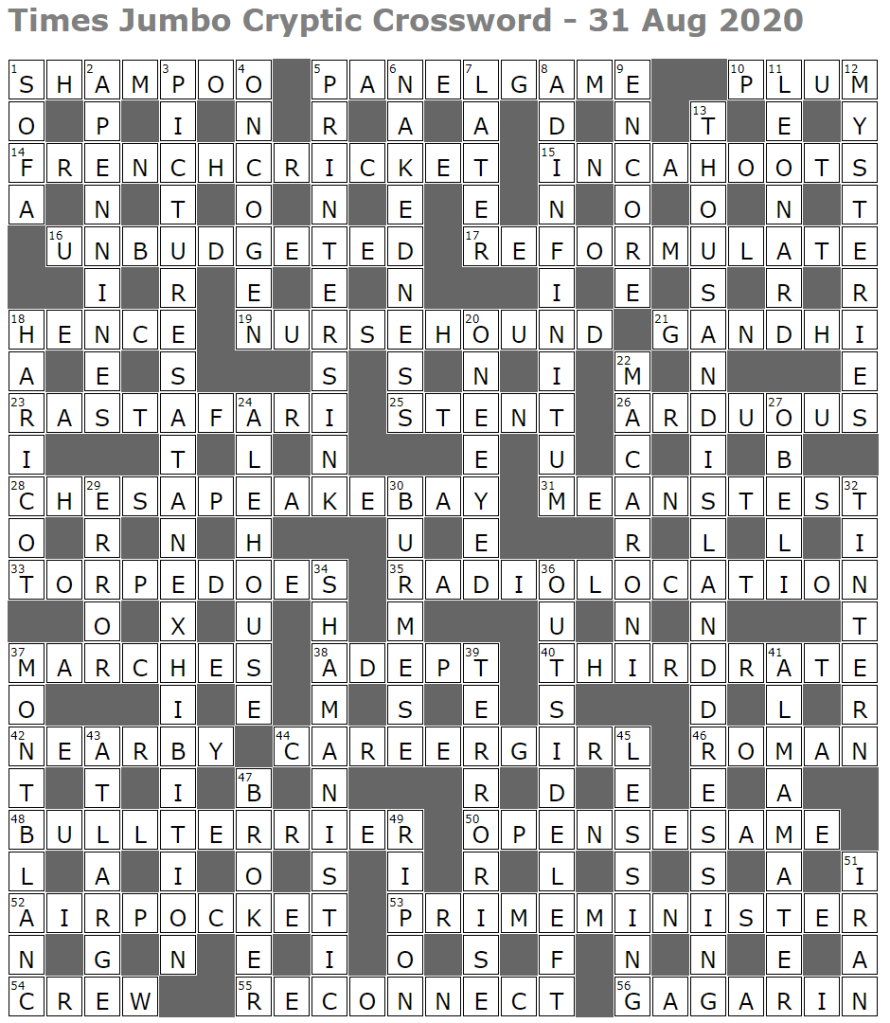 1. Go away, packing some current toiletry (7)

Answer: PLUM. A triple-header, I believe, in that the solution satisfies “a lot” – a plum, according to my Chambers, is an old word for £100,000 – also “well-rounded” and “fruit”.
[EDIT: Thanks to Ong’ara in the comments for providing a much better solution to this, being PLUMP (i.e. “well-rounded”) with its last letter removed (indicated by “a lot of”). Much obliged, Ong’ara! – LP]

Answer: FRENCH CRICKET (i.e. “game”, specifically one where “players throw a ball at a batsman from the place where it is fielded, the batsman being out if the ball strikes his or her leg below the knee.” (Chambers) – it’ll never catch on). Solution plays on how “Nice” is a FRENCH city, and a CRICKET is a “jumping” insect. You get the idea.

16. Peacekeepers with move to East Darfur – initially not costed (10)

17. Again plan to improve university gets behind schedule (11)

Answer: REFORMULATE (i.e. “again plan”). Solution is REFORM (i.e. “improve”) followed by U (a recognised abbreviation of “university”) and LATE (i.e. “behind schedule”).

Answer: RAS TAFARI (i.e. “overturned ruler”, also known as Haile Selassie, Emperor of Ethiopia who was overthrown in a military coup in the mid-1970s). Thanks to a spot of recycling the solution is TSAR (i.e. “ruler”) reversed (indicated by “overthrown”) and followed by AFAR (i.e. “distant”) and I (i.e. “[Roman numeral] one”), like so: RAST-AFAR-I. Nicely worked.

25. What improves flow of southern wine from Spain (5)

Answer: STENT (i.e. “what improves flow” of blood). Solution is S (a recognised abbreviation of “southern”) followed by TENT (i.e. “wine from Spain”).

31. Penny-pinching sets back head of Treasury’s check on finances (5,4)

Answer: MEANS TEST (i.e. “check on finances”). Solution is MEAN (i.e. “penny-pinching”) followed by SETS reversed (indicated by “back”) and T (i.e. “head of Treasury”, i.e. the first letter of “Treasury”), like so: MEAN-STES-T.

Answer: TORPEDOES. Clue plays on how the solution can be a noun and a verb, i.e. how to TORPEDO something can be said to “wreck” it. You get the idea.

35. Position-finding in Lima, say calling to drop off Victor (13)

Answer: MARCHES (i.e. “border region”). Solution is an anagram (indicated by “assorted”) of CHARMS wrapped “around” E (a recognised abbreviation of “European”), like so: MARCH(E)S.

38. Expert at getting round odd parts of Dieppe (5)

Answer: ADEPT (i.e. “expert”). Solution is AT wrapped “round” every other letter of DIEPPE (indicated by “odd parts of…”), like so: A(DEP)T.

42. Organ installed in new empty baptistry not far away (6)

Answer: CAREER GIRL (i.e. “female working” – blimey, what century is this from?). Solution is CAREER (i.e. “to run”) followed by L (a recognised abbreviation of “large”) and RIG (i.e. “outfit”) once these latter two have been reversed (indicated by “in recession”), like so: CAREER-(GIR-L).

Answer: ROMAN (i.e. “Nero, perhaps”). “Some” indicates the solution has been hidden in the clue, like so: PY(ROMAN)IAC. Nicely worked.

50. Old writers have English with identical style of spelling (4,6)

Answer: OPEN SESAME (i.e. “spelling”, as in how the words would open the forty thieves’ cave in One Thousand and One Nights – now if only the words would work on peel-and-reseal packaging: surely the biggest lie that has been fed the British public in decades. (Checks all lies fed to British public over several decades.) Yup. Definitely the biggest. Thank goodness for knives, I say. It’s the only way to get into the bloody things. Of course, then you’ve got to get the cling film out to wrap the now-mutilated packaging, instantly doing away with the environmental benefits of having it resealable in the first place. I mean, why? (Drops to knees) Why?!? WWHHYYY??!! In fact, why aren’t we protesting this? Action is surely needed to stop… wait, I appear to have gone off track.) Solution is O (a recognised abbreviation of “old”) followed by PENS (i.e. “writers”), then E (a recognised abbreviation of “English”) and SAME (i.e. “identical”).
[EDIT: Thanks to Sue in the comments for the typo fix. O is a recognised abbreviation of “old”, not “open”. Cheers, Sue! – LP]

52. Impression capital is a cause of fall in aviation industry (3,6)

Answer: AIR POCKET (i.e. “cause of fall in aviation industry” – sick bags at the ready!). Solution is AIR (i.e. “impression”) followed by POCKET (i.e. “capital” – one definition of “pocket” is “one’s personal stock of money”).

Answer: CREW. Solution satisfies to “man” a boat and “cried”, i.e. the past tense of “crow”.

Answer: RECONNECT (i.e. “make union once more”). Solution is an anagram (indicated by “upset”) of CENTRE wrapped “about” CON (a recognised abbreviation of “Conservative”), like so: RE(CON)NECT.

56. Cosmonaut a bit mad at urine being uncovered (7)

1. Some works of art in Chesterfield (4)

Answer: SOFA (i.e. “Chesterfield”). “Some” indicates the solution has been hidden in the clue, like so: WORK(S OF A)RT.

4. Reason for growth projection in unit over November (7)

Answer: ONCOGEN (i.e. “reason for growth”, specifically an agent causing the formation of cancerous tumours). Solution is COG (i.e. “projection” – can refer to the tooth of a cog as well as the thing itself) placed “in” ONE (i.e. “unit”) and followed by N (“November” in the phonetic alphabet), like so: ON(COG)E-N. Another of those make-up-a-word-and-see-if-it’s-in-the-dictionary moments.

5. What publisher uses to improve look about reset insert (8,3)

Answer: PRINTERS INK (i.e. “what publisher uses”). Solution is PRINK (i.e. “to improve look” – not a word I can imagine myself using: “Yeah, mate, I’ll be right there. I’m just having a little prink first…”) wrapped “about” an anagram (indicated by “reset”) of INSERT, like so: PRIN(TERSIN)K.

Answer: NAKEDNESS (i.e. “having shed skins” – a bit Hellraiser if you ask me, but okay). “Writhing” indicates anagram. Solution is an anagram of SNAKES END.

7. Roofer starting late and after some time (5)

Answer: LATER (i.e. “after some time”). Solution is SLATER (i.e. “roofer”) with the initial letter removed (indicated by “starting late”). Naff that the solution is a variant form of another word used in the clue.

Answer: AD INFINITUM (i.e. “to the furthest distance”). Solution is A followed by DIN (i.e. “noise”), then F (i.e. “loud”, specifically a recognised abbreviation of the musical term “forte”), then I (i.e. “[Roman numeral] one”) and MUTINY (i.e. “rising up”) once its last letter has been removed (indicated by “mostly”) and the remainder reversed (indicated by “up” – this being a down clue), like so: A-DIN-F-I-NITUM.

Answer: MYSTERIES (i.e. “puzzles”). Solution is T (a recognised abbreviation of “tons”) placed in SERIES (i.e. “row”) and the whole then placed after or “following” MY, like so: MY-S(T)ERIES.

Answer: THOUSAND ISLAND DRESSING (i.e. “this might go with green items”, i.e. salad). Not on the same page as the setter on this one, I’m afraid. I get the DRESSING = “robing” part but I cannot parse the rest satisfactorily. “A suggestion of” could hint that the solution itself, when written a certain way, represents a cryptic clue, but nothing is sparking. Alternatively, you could write it as THOU SAND IS LAND DRESSING, which, while true, doesn’t speak much of a “misrobing” to me. Meh. Whatever. If I have a brainwave or if a kind commenter swings by with the solution I’ll update the post.
[EDIT: Dr John wins the internet after clearing this one up, pointing out that “misrobing” gets you the solution when it’s broken down as follows: M (i.e. “[Roman numeral] THOUSAND), IS (a recognised abbreviation of ISLAND) and ROBING (i.e. DRESSING). I echo his “Phew!” in the comments! Cheers, Doc! – LP]

18. Bin last trio of artichokes and cook another vegetable (7)

Answer: HARICOT (i.e. “vegetable”). Solution is an anagram (indicated by “cook”) of ARTICHOKES once the last three letters or “last trio” have been removed or “binned”.

Answer: ALEHOUSE (i.e. “pub”). Solution is MALE HOUSE (i.e. “fraternity”) once the M has been removed (indicated by “Mike leaves” – M being “Mike” in the phonetic alphabet).

27. Signs of dodgy passages round Bethel, I have article stolen (5)

Answer: OBELI (i.e. “signs of dodgy passages”, an obelus is “a – or † used in ancient manuscripts to mark suspected, corrupt of spurious words and passages” (Chambers)). Solution is O (i.e. “round”), BETHEL and I once the THE of BETHEL has been removed (indicated by “…have article stolen” – an article being a word like a, an or the), like so: O-BE(THE)L-I => O-BEL-I. Tough bugger.

Answer: TINTERN (i.e. “feature in Wordsworth poem”, specifically Lines Written A Few Miles Above Tintern Abbey). Solution is TIN (i.e. “can”) followed by TERN (i.e. “bird”). One of those make-up-a-word-and-search-Google moments. I have no shame.

34. Bogus article is stripped stick of a witch doctor (11)

Answer: MONT BLANC (i.e. “skiing area”). Solution is MONTH (i.e. “March, say” – other months are available) with its last letter removed (indicated by “a lot of…”) and the remainder followed by BLANK (i.e. “clear”), again with its last letter removed (this time indicated by “mostly”) and the remainder this time followed by C (a recognised abbreviation of “cold”), like so: MONT-BLAN-C.

Answer: ALMA MATER (i.e. “old school”, from the Latin for “benign mother”). Solution is ALTER (i.e. “to adjust”) wrapped “about” MA and MA (i.e. “a couple of degrees”, specifically Masters of Arts), like so: AL(MA-MA)TER.

Answer: AT LARGE (i.e. “on the run”). “Belted” indicates anagram, as in giving something a whack. Solution is an anagram of EARL and TAG.

45. Author with official approval, not British (7)

Answer: Doris LESSING (i.e. “author”). Solution is BLESSING (i.e. “official approval”) with the B removed (indicated by “not British” – B being a recognised abbreviation of “British”).

Answer: BROKER (i.e. “trader”). Solution is R (a recognised abbreviation of “runs” used in a number of ball games) placed “after” BROKE (i.e. “ruined”), like so: BROKE-R.